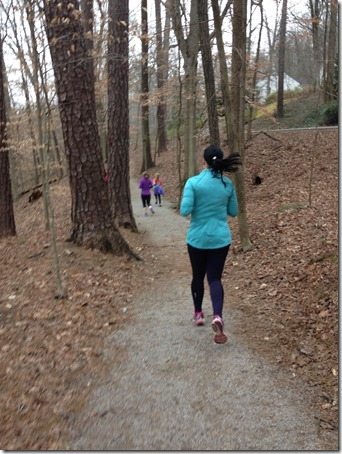 A few months ago, I launched a running club for the moms in our church community group. On a given Sunday afternoon, we congregate in a pack of 2-5 moms, where we jog, walk, run, and talk.

The talking part is what we do best.

We discuss our kids, our husbands (all good stuff obviously), homeschooling, other schooling, and ourselves.

And all of our post-childbirth issues – many of which come up because of running.

We discuss the state of our pelvic floor and whether we’re likely to pee ourselves while running or not (we’ve decided that C-Sections have their benefits), we discuss hormonal changes and how The Plights of Womanhood affect our active lives, and we discuss many much more inappropriate topics that really shouldn’t be blogged about.

Because that’s what Mom’s Running Club is for. Conversation so distracting that we don’t realize we’re running.

This past Sunday was typical in this way – the talking, not the peeing. We had discussed all the details of many things when we got on the subject of our gynecologists, because I had an appointment the next day. All three of us in attendance on that particular run visit the same practice (it’s like a gynocult), and the cult requires you to see each doctor at least once when you’re pregnant, so we can knowledgeably debate the pros and cons of each doctor.

As I was running my laundry list of preferences and why I didn’t like this doctor and that doctor, I got to…let’s call him…Doctor X.

I had a humiliating experience with Doctor X about nine years ago when I was very early in my pregnancy with Ali, so I’ve never wanted to see him again – in any context. And because this is what Mom’s Running Club is for, I was sharing this particularly horrifying story with my two running partners.

Right when I got to the most embarrassing part, quoting the particularly awkward thing that Doctor X had been forced to say to me, my storytelling voice naturally rose to the tempo of the tale. At which point both of my friends started laughing simultaneously.

Then they both twisted their necks to look behind us at the couple who had just passed by.

I immediately assumed that my talking too loudly had amused the poor people out for a casual stroll and that they had given some sort of indication that they’d walked by at just the good part of that story.

But that would have been too pleasant.

Both of my friends breathlessly blurted out at once, “That was him!! That was Doctor X! AND his wife!”

And that’s how my most humiliating moment with Doctor X was replaced. By a brand new moment.

Epilogue: I still had to go to the gynocult the next day. And I’ve never focused on being invisible as hard as I did when I had to pass by Doctor X’s open office door.

12 thoughts on “What Happens at Mom’s Running Club.”