We live adjacent to a really nice part of town.

“Adjacent”, in this context, is a synonym for “undesirable”, and that’s fine. Our quirky little neighborhood is unincorporated and we embrace that unincorporation. Without silly zoning rules to hold us back, we have such fineries as skateboarding half-pipes and 400-600 white pigeons in portable buildings in our back yards, and “natural areas” and sleds pulled by electrical cords in our front yards. 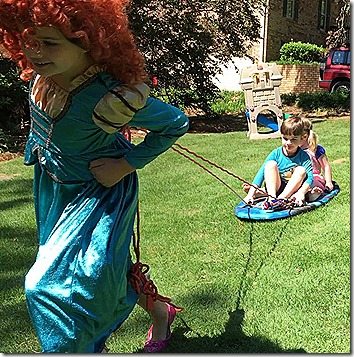 So it’s not surprising that some of our well-to-do neighbors are not always fans of our adjacentry.

I first became aware of the extent of their suspect fandom when I saw a new neighbor walking by. I was feeling oddly extroverted, and I flagged her down to say hello and introduce myself. She made sure that the first half of her first sentence clearly informed me that she lived “one street over” and that also, our street had an ant problem. And mosquitoes. And we should do something about that.

[We did. The Mosquito Authority does good work. Our mosquitos left and are probably in her yard which is why her house is currently for sale.]

Undeterred in my neighborly spirit, I asked if she had kids. She did, in fact, and their ages were uncannily compatible with Ali and Noah.

Which led to this conversation – one I shall hold dear in my heart for the rest of time.

Her: ”Yes, but – they’re in different…uh…districts.”

Me: “Oh, yes. Well, we homeschool. So we bought outside of a city school district on purpose.”

Apparently my explanation sounded like one-upsmanship to her, so she quickly retorted,

Her: “Oh, yes. I’ve considered homeschooling too because we just aren’t made for this system. I’m thinking we may go the [$30,000/year] private school route instead. My kids are just too creative for this [ridiculously sought after] school system. We’re just round pegs in a square hole.”

So we know our place. And we keep our sleds-pulled-by-extension-cords on our side of the fence and happily enjoy The Kingdom’s delightful restaurants, shopping, playgrounds, and running trails, never forgetting that those lovely amenities are not ours. We are just travelers from a foreign land…a land that just happens to have exceedingly close proximity to Oz.

Oz, that has houses such as this one: 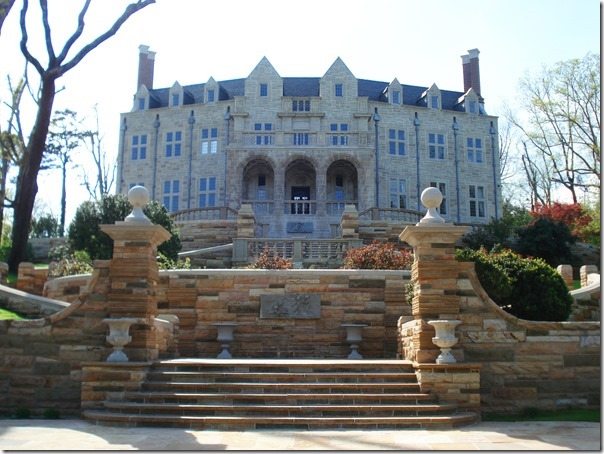 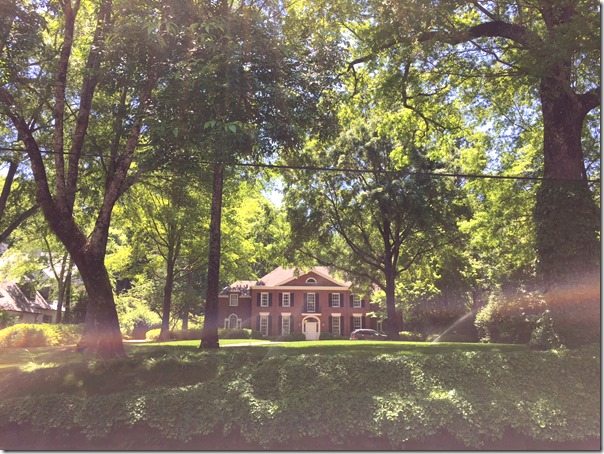 But every now and then, it’s nice to know that they’re human too. And just because they paid three to 30 times more for their house than we did for ours, that doesn’t always mean that they have better taste.

(Although usually it very much means that.)

Such as, for one, this holiday display:

And this mailbox, always my favorite example of Decking the Halls. 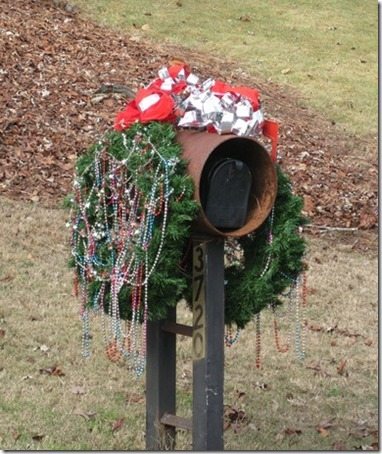 But those examples that I had always held dear faded when, on a run before Easter, I was jolted out of my happy place by this frightening appearance, staring at me from behind a bush. 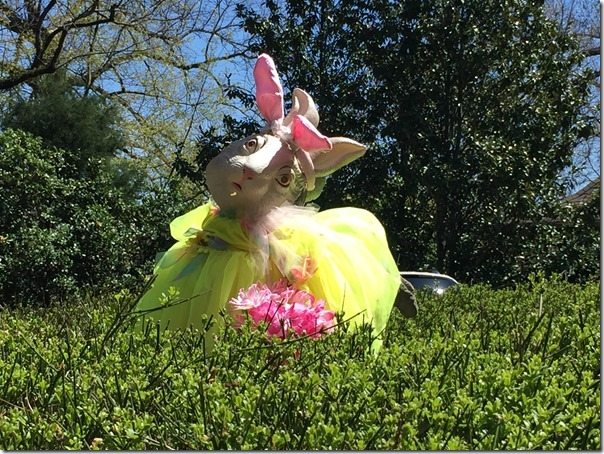 I jumped back with a yelp, then cautiously peeked over the bushes again. 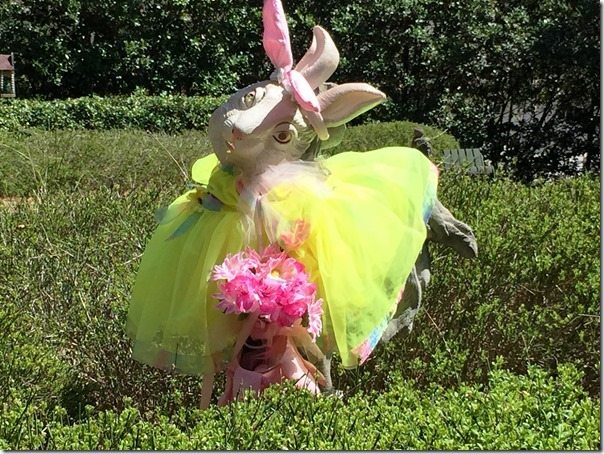 There was a tulle dress with pastel rainbow ribbon sewn to the hem.
A bouquet of fake Tiger Lilies.
A satin purse surely containing a weapon of mass destruction.
Bunny ears.
And, the most frightening part, a bunny mask with hollow eyes, nose, and mouth. 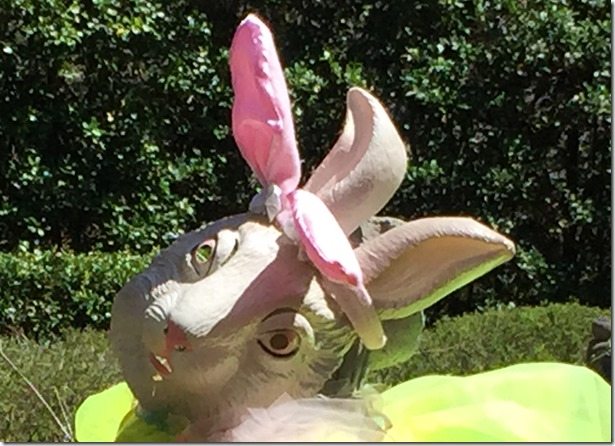 I held eye contact as long as I could, then ran (much faster) back to my car. Because one never knows when a creature like that might become sentient. And rabbits are fast. Even when wearing tulle and an extra pair of ears.

I was relieved when Easter was over and I could resume my regular running route without fear of having my heart torn out by that evil creature. I ran many miles without even noticing the statue, presumably because it went back to simply being a statue.

I was running toward the sun, trying to keep the sweat from burning my eyes, when I caught a glimpse of something ethereal. From another planet – surely. I turned slowly, then stopped running to take in what was the majesty of The Statue. 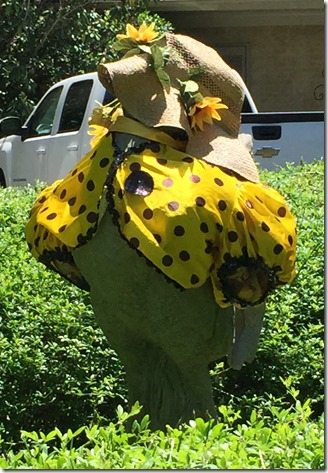 The first thing that struck me was that this was no rabbit.

This was a rooster.

Which meant that at Easter, there had been poultry pretending to be a rabbit. With four ears. Which was immediately more disturbing.

But now – now we have a cross-dressing pantsless rooster standing proudly who can’t see where he’s going and is quickly losing the flowers daintily wrapped around his hat. 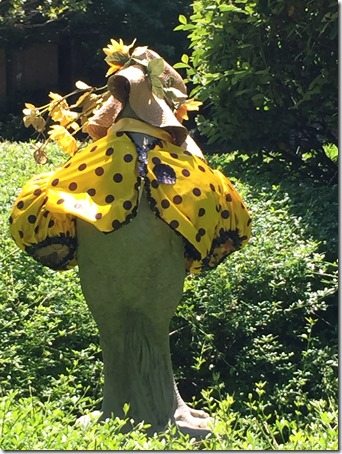 It wasn’t as frightening as his previous dalliances, so there was that.

After my run, I looked up the Rooster Residence on Zillow, the premier tool in a serial-stalker’s repertoire. The rooster owned over 5,000 square feet of house, purchased fourteen years ago for nearly a million dollars, and clearly worth even more now, despite the somewhat suspect doorkeeper.

Us county-dwellers have our quirks.

And we know where we belong on the food chain.

But none of us are dressing up our concrete cocks and making runners think they just entered into a horror movie.

So maybe – just maybe – we’ll hold our heads a little higher next time we go out to eat.

7 thoughts on “A Matter of Taste.”