Emoji have always been a peculiar thing. A thing that I use every day, but that also creates many problems in my mind. A year or so ago, I began documenting these issues in a note on my iPhone, hoping that one day, Siri would read my note and offer an answer for my many perplexing curiosities.

She has not done so yet. But here are my notes thus far, unedited: 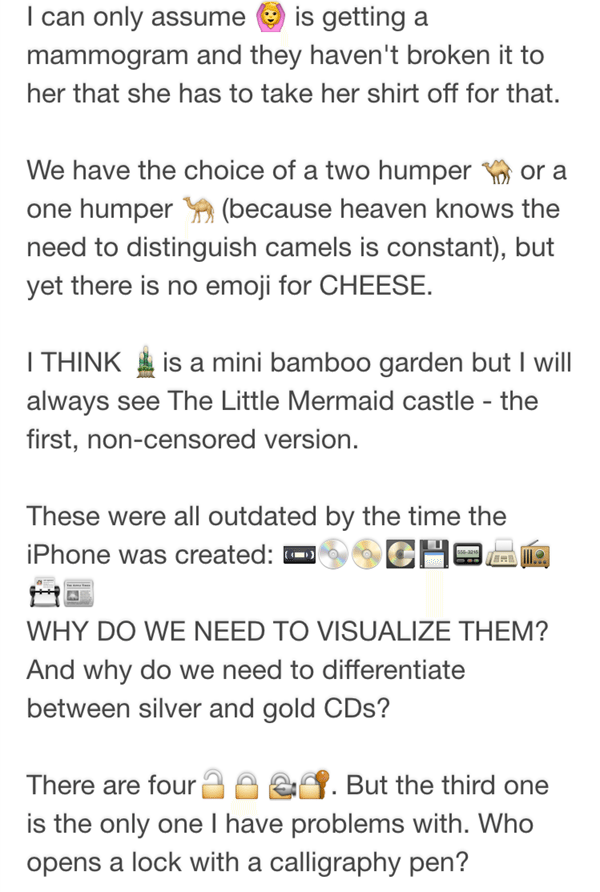 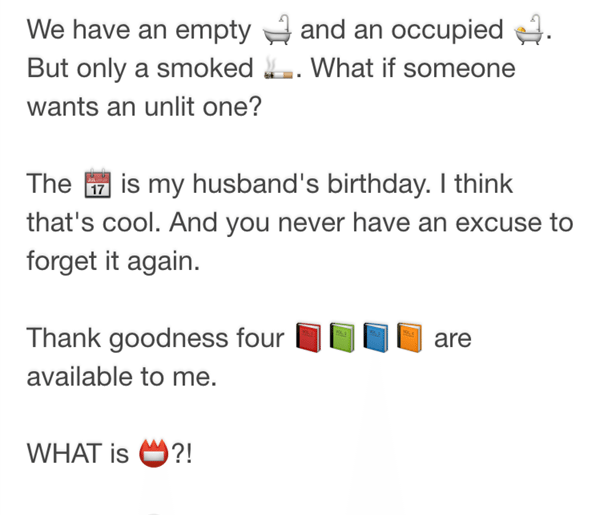 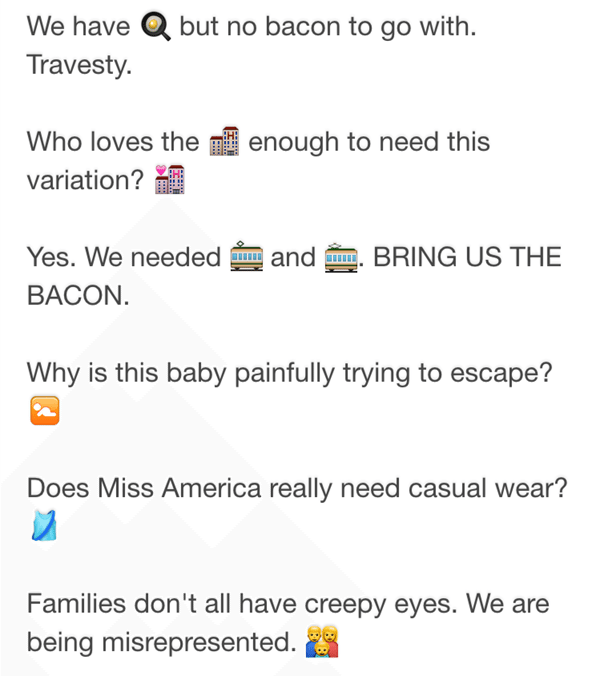 Thankfully, last week’s iPhone update was all about Emoji. As it should be – Emoji stand alone as the most important feature a phone can have. But, they didn’t address any of my issues. Although they added a few new Emoji here and there (no bacon or cheese), the main purpose of the update was to fix what had been a glaring lack of diversity in our nation’s ability to emote. 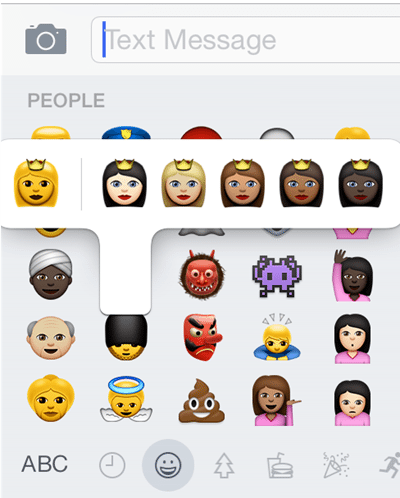 And rightfully so. Sasheer Zamata explained the now former issue perfectly a few months ago on SNL:

Besides, that Salsa dancer was WAY too white before the update. 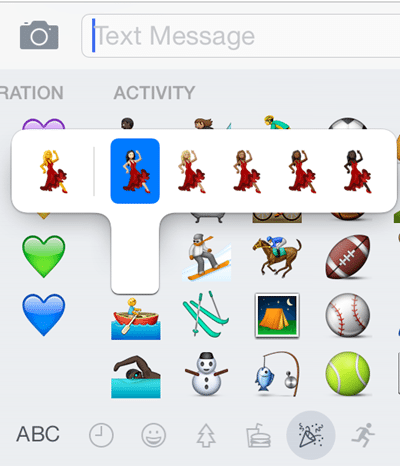 However, Apple still has work to do if we want to live in a perfect Emojidiverse Universe.

Cats everywhere are horrified at their lack of representation. Gray cats, Tabby cats, Ginger cats, and black cats are all in an uproar – or at least a quiet meow – over the fact that their differences didn’t get addressed. 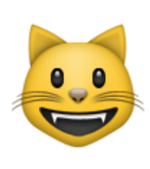 And then there’s lipstick. Who says lipstick kisses can only be in hot pink? Coral lipstick has feelings, too, you know! 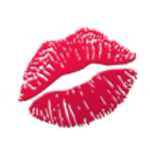 And don’t even get me started on the Cactus body-shaming happening in the Emoji world. I have been out west. I have seen many cacti. Did you know that I’ve never seen a cactus with a perfect body? No. Not a one of them look like the cacti we all grew up seeing. Or the cactus personified by Apple. 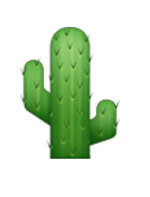 Some cacti only have one limb. None line up so perfectly diagonal. Some have stubby little half arms. These precious cacti don’t deserve this level of photoshopped perfection constantly shoved down their throat! 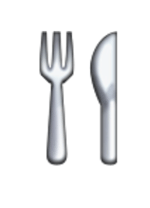 And I have an Emoji option for the pager I had fifteen years ago but not for the FitBit I wear every day? It’s time for a wearable device Emoji overhaul, Apple.

And thank you for representing women’s swimwear, but some of us have had babies. 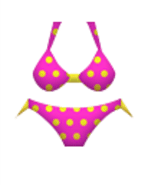 But by far the most indignant Emoji over the lack of diversity offered to them is the Poop Emoji. 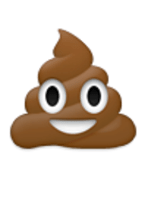 So I took the liberty of creating some desperately needed options.

After all, Poop is not always brown. Sometimes, it’s scary-green. 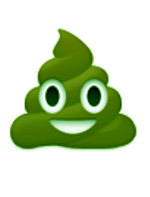 And sometimes, it includes vegetables. 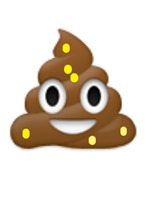 Then other times, it’s not at all well-formed. 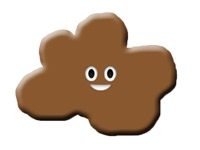 And who can forget those newborn diapers filled with Meconium? NEW PARENTS NEED AN EMOJI FOR THAT EXPERIENCE. 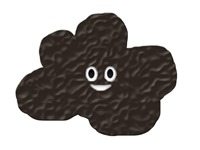 And then there’s the issue of lack of fecal emotion.

Here’s a newsflash: Poop is not always happy. 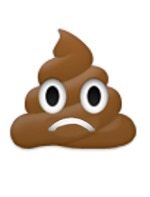 Poop has feelings too! 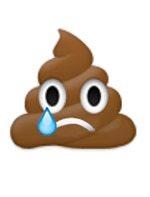 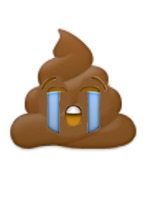 And yes. Sometimes, poop even gets angry. 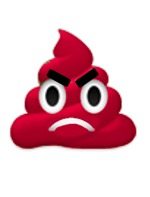 So until we get our proper range of crap, we cannot rest.

And we cannot quit fighting. 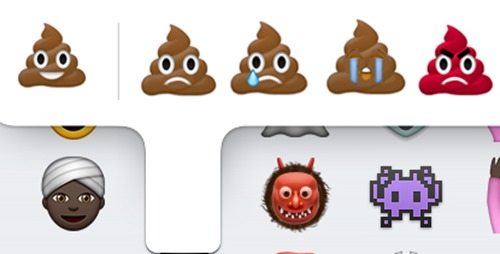 For the sake of the poop.

11 thoughts on “An Important Opinion Piece on Emoji.”