My friends of the Daily Child Bather Variety (which thankfully are rare) cannot understand people like me.

They’re still in denial that the facts prove that most people are indeed like me but since I’m open and vocal about my anti-bathing stance, I must take the brunt of their shock.

But here’s a little story to illustrate why, exactly, I only bathe my children twice a week.

Maybe this kind of thing doesn’t happen to the daily bathers. And if so, they should count their blessings and shut up.

But they do happen to me.

It was a Thursday afternoon, perhaps yesterday, directly before naptime.

The timing is important, because all mothers know that “directly before naptime” means “I seriously cannot wait to have you in bed so that I can have a moment to reclaim my thoughts without anyone saying ‘heymommyheymommyheymommyheymommy’ while I’m simply trying to think one tiny sentence fragment of my own.”

(Cherish every moment, sweetheart. They go by so fast.)

But thanks to a frantic week, we were off schedule, and I was aware that my children stanketh more than usual.

(“Bath Nights” are Saturday nights and Tuesday nights. You do the math.)

So I had no choice. Pre-naptime baths absolutely had to happen.

I began running the bath and called the children from their blissful play.

“Everybody get naked and go tee-tee!”

Noah was first to whiningly reach me. As he was hopping off the toilet, he was still saying “I gotta go potty!”

The washing began – along with the shock and awe over the fact that this bath, like all baths, requires me to spray your head, scrub your head, and rinse your head.

(WHY is that always such a surprise?? I will never understand.)

I finished Noah’s head and relegated him to the back of the tub. Then I began detangling Ali’s hair.

It’s unreal, her hair. At least ten feet long, thick, fine, and prone to extreme knots worthy of their own TLC freak show.

(I took her to a random salon at her birthday and requested that they put a deep conditioning detangling treatment on it. The salon manager didn’t believe me that she needed it, but agreed to it anyway. The treatment itself created a matted knot so big that it took her and another stylist over thirty minutes to get it out, all while the she shot me dirty, accusing looks while repeating that she’d never seen anything like it, clearly implicating me in a conspiracy to torture her.)

(Needless to say the treatment has not been any sort of long-term help.)

Back to the bath.

I was two and a half days into removing her tangles when Noah screamed, “I neeeeed to poooooop!”

Of course you do. Because you only poop once a week and of course it would be during this small window of rare bathing that your urges urgently interrupt.

But hey – it’s better than the alternative.

He tracked his giant pond-sized footprints across the bathroom floor.

He sat behind us, straining and turning purple, filling the room with the most unclean sound effects and aromas.

I considered the air particles for a second – should I just give up this bathing process all together?

So I rinsed the masses of conditioner off my hands and headed over to wipe a butt.

He leaned over, holding my legs as I sent a piece of unlucky toilet paper journeying through his buttcheeks.

“My hands are all wet from my bath – not from the potty.”, he told me.

“I’m aware of that fact. But thanks for the reassurances.”

I wiped him extra thoroughly since he was headed back into a liquid germ-sharing situation with his sister, then flushed and returned to my detangling of the lion’s mane.

I didn’t notice the fact that his once-a-week poo was so massive that it had clogged the toilet. Or that the commode innards had also gotten stuck in the air and the water was continuing the run.

(One would assume such fortune could only happen once in a lifetime. But here it was, happening again, in the very same bathroom that was now brand new because of the last time it happened.)

I was unaware. Until I heard the sound of Victoria Falls rushing from the toilet.

I jumped up, splattering conditioner onto every surface, all while screaming “NONONONONO STOPSTOPSTOPSTOP!!!!”, sloshed through the quickly forming lake, and began frantically turning the knob on the back of the toilet.

The falls kept falling until the very last quarter turn. By then, the River of PooWater was nearing Ali’s bedroom.

I snatched up their towels and started mopping, while children, who are the ultimate Captain Obviouses, began saying things like,

“There’s water in the floor, Mommy!”

“The toilet is overflowing!”

I am not a yeller.

But in a moment of extreme PTSD – complete with flashbacks of living with the last toilet flood damage for 184 days – I yelled.

Because apparently sopping up water demands silence. At least for Mommies who cannot tune out children.

It took both of their towels and a third fresh one from the linen closet to soak up all the PooWater, leaving me with extraordinarily unclean-feeling feet.

But it’s not like I could wash them off in the bathtub. Or track across my bedroom carpet to the other bathtub.

So I just went back, once more, to my job of detangling.

After everyone was [as clean as they could get in that room] and deposited in their respective bedrooms wearing fresh towels, I carried the sadly abused towels downstairs, using as few fingers as possible and praying that they weren’t wet enough to drip. I opened up the washing machine, ready to fling them in from afar…only to discover that I’d completely forgotten about the last load of laundry the day before.

is why my children are, as of today, required to become hipsters.

I took a few pictures of the perpetrator so that I could remember what cleanliness looks like. To cherish the moment. 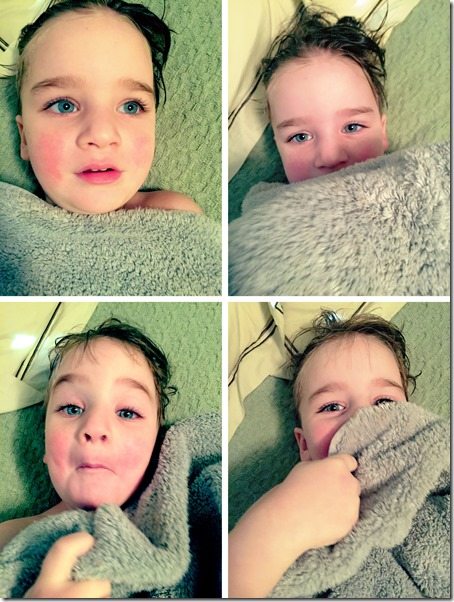 Because he will be allowed bathe again when he’s twenty-one.

15 thoughts on “Why I Quit Bathing My Kids.”