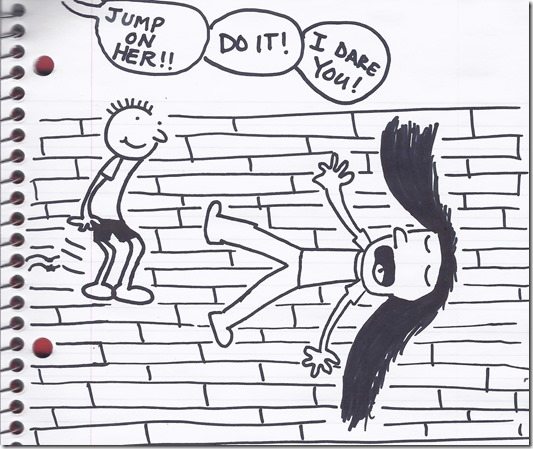 Thursday night, there was a strange man with a high-beam flashlight walking around my front yard.

I never got up to check, nor did I scream for my husband, because I totally assumed that he must be one of Fred the Cat’s dozen or more common-law owners, and he was out looking for Fred to put him inside before the cold snap.

So if I get chopped to pieces by an ax murderer because I was trusting an overly friendly cat, would Alanis Morissette write that into a song about Irony?

(Because it’s not really ironic. And that’s exactly what she likes to write about.)

I inadvertently forgot about a high-ranking item on last week’s list of Things That Make a Parent Crazy, so of course they would throw themselves upon me two days later.

I prefer funky but understated, fun but not too crazy, and NEVER lights.

He prefers (and will buy if I let him) all manner of bling and cheesiness, lit with flood lights, search beams, strobe lights, lighthouse beams, and disco balls.

Yet, it was I who bought Ali these shoes last week. 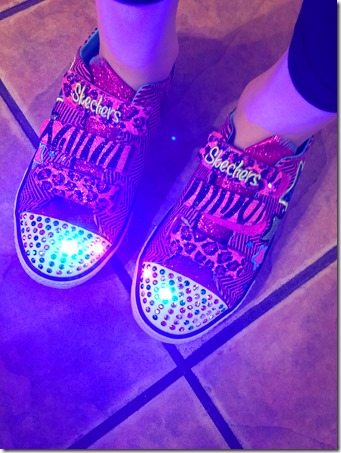 Yes, they’re so bright that they illuminate an entire room with an eerie aura, and I have to cover my eyes every step she takes.

It was the lady at Nordstrom Rack’s fault.

I was returning some blue jeans and sent Ali to the shoe department (her favorite shoes had a hole in the toe and no matter how much she tried to convince me that it made them even more comfortable, I insisted they be thrown away), and she came back with these, lights dancing in her eyes (and blinding me).

My reaction was one of uncontained bemusement, naturally.

The clerk returning my jeans looked at me as only a grandmother could and said,

“Now. She will remember those shoes for THE REST OF HER LIFE. They will mean so much to her! And I’m not telling you the batteries will die because they will not. But come on, now. Make her day!”

Ali blinked her eyes innocently, but I was sure I saw her quickly pass $20 to the clerk.

They were on clearance….

And she did love them…

So I bought them. And she’s been frantically jumping up and down ever since. 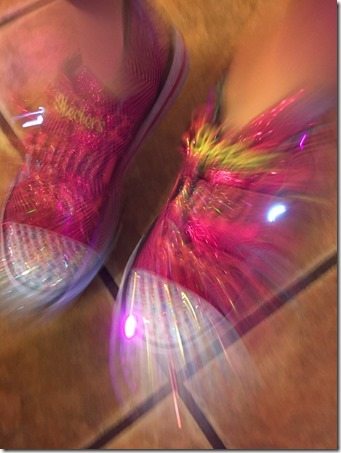 Well yes, her brother obviously, but also her father.

Fathers. They’re to blame for the existence of Light-Up Shoes. I’m sure of it.

I haven’t felt bloated lately. It struck me as odd how long it had been…

Until I did laundry.

(Because apparently, I was quite a bit behind.)

And then I had an EARTH-SHATTERING REALIZATION.

What if all the times us ladies think we’re bloated, it’s really just that our blue jeans recently came out of the dryer?

What if the monthly rotation of feeling “bloated” and “skinny” perfectly lines up with our respective laundry schedules, rather than other types of schedules we had previously suspected?

What if it’s not actually us at all???

EARTH-SHATTERING, I tell you.

The following is a transcription of a Pillow Talk conversation between Chris and I. I don’t know why we were talking about Tube Tops. Who knows how any Pillow Talk starts. But it went something like this, starting with Chris…

“I know. But it just sounds stupid.”

“There are way worse names in women’s fashion than the Tube Top.”

“And then there’s The Bootie.”

“Yup. That’s how it’s always referred to in fashion articles. THE bootie.”

“They should just be called short boots.”

“So you’re saying that I could walk into a shoe department and say, ‘Excuse me, I’d like to look at a large selection of Lady’s Booties!’, and I wouldn’t get kicked out?”

“I’m most definitely saying that. The clerk probably wouldn’t blink twice, and she’d answer you with, ‘Certainly, sir. Would you like to see our black booties, our brown booties, or perhaps these beige booties with the spikes?’”

“And then I’d say, ‘No, these are all too pointy-toed. Do you happen to have any big, round booties?’”

“I’m sure she’d find you some round booties.”

“I am SO going to do this next time we go to the mall.”

2 thoughts on “Diary of a Tired Mom: If the Shoe Fits.”