Ali has been running with me since last summer, and she’s shown a surprising amount of proficiency at it, along with enjoying it most of the time (that may be due to the fact that we usually run to the candy store, but no matter. We all run for chocolate, am I right?)

A couple of months ago I got the idea that it would be fun to run a race with her. Maybe she’d like the Color Run – what kid doesn’t want to throw paint everywhere?

“I don’t mind running with you, Mommy, but I don’t really want to get all messy.”

So the next logical conclusion was to run in the Superhero 5K – it’s part of the Mercedes Marathon Weekend, so we would get to run the day before Chris ran his first marathon. It seemed right – nay, familyish – to all run in the same weekend.

(Except Noah. Who made it quite clear that he had no interest in running with anyone for any reason.)

So we signed up and, since it was a Superhero race, began modifying our Lego Movie Halloween costumes into running clothes.

(Because I did not wear leggings as pants to my Church’s trunk and treat. Nobody wants to see that much trunk to get their treat.)

I also felt a little weird putting makeup on for a race, but WyldStyle is not the type of girl that would leave her hot pink lipstick behind just because she might do a little running.

Plus, those freckles weren’t going to paint themselves. 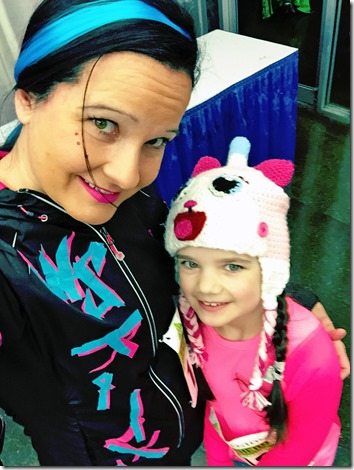 The whole family got up early for the race (seriously – we had to wake Ali and Noah up at around seven A.M. – they had no idea people woke up at that time of day), and then Chris and a sleepy Noah dropped us off a block away in the very windy, cold, and flirting-with-rain morning. 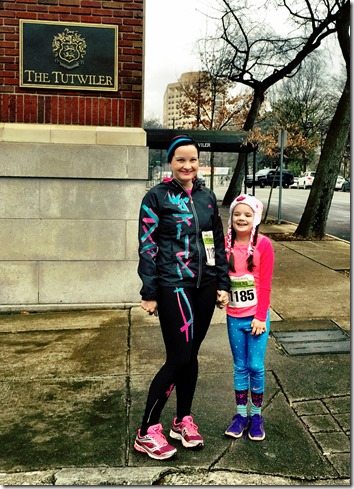 (It was 42 degrees, for those Northerners who would like to mock us.)

We hurried to the Boutwell Auditorium to warm up before the race, where a photographer found us and told us to pose like superheroes 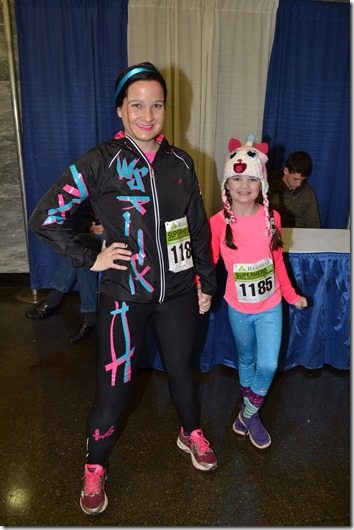 Apparently Ali’s superhero needs to pee. Or is a superhero ballerina. Or both.

Within minutes, we heard the call to the starting line. We headed outside and were once again met with the wind. As we jumped in place to stay warm, it began to rain.

Ali looked at me with her giant, frightened eyes and said, “Why is it RAINING, Mommy??”

As if there’s a good answer to that question.

Being that I am not enough of a homeschool Mom to go into The Water Cycle three minutes before a race begins, I promised her it would quit soon, prayed that I was right, and got back to my jumping in place.

It turned out that I was indeed right, and the droplets ended soon after. It was still the coldest Ali had ever run in, so there were occasional complaints about breathing in the cold air.

And the frigid breeze.

And the wet roads.

She also wanted to hold my hand while running as much as possible.

But yet, somehow, every time she saw a photographer, she smiled, looked straight at them, and quit holding my hand or looking like she was being tortured with frigidity. 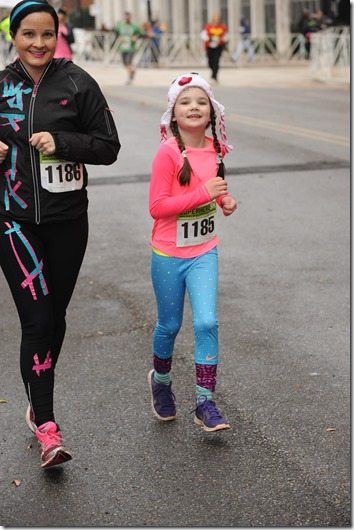 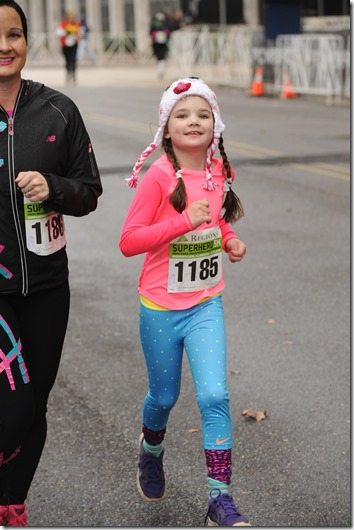 Or at least a perfect poser. 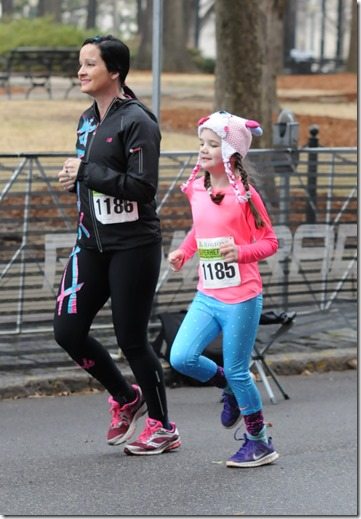 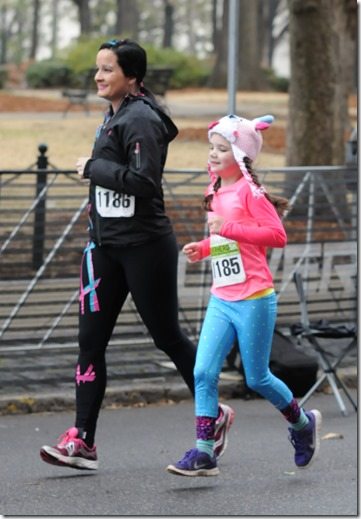 Chris and Noah situated themselves strategically at Railroad Park, where they would see us pass by twice. My Mom met them there to cheer Ali on in her first race.

Although Chris did not go to the trouble of rekindling his role as Lord Business, Noah was absolutely Emmet. 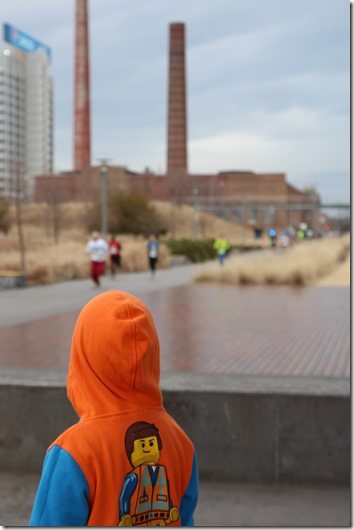 They finally spotted us, and Ali continued her trend of looking like the happiest person on the race course. 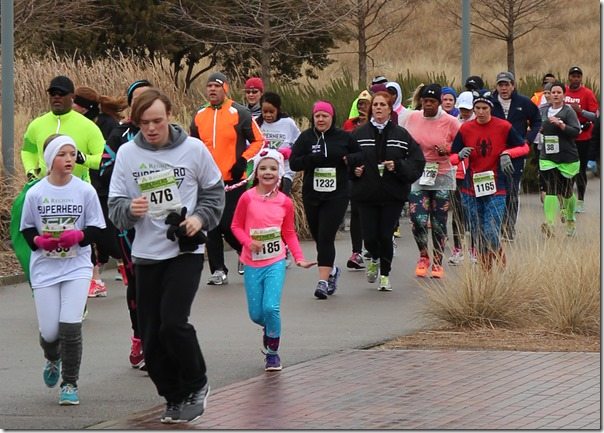 Like seriously – you can hardly tell that she’s begging me to let her walk right at that moment. 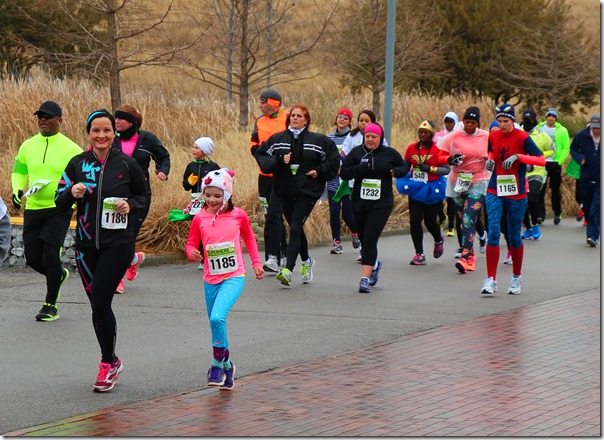 Noah cheered for us coming and going, 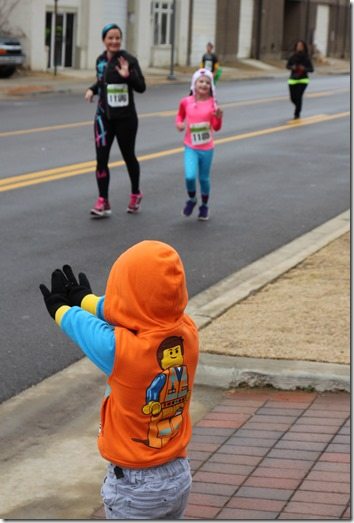 then immediately left the scene to go slide down his favorite hills. 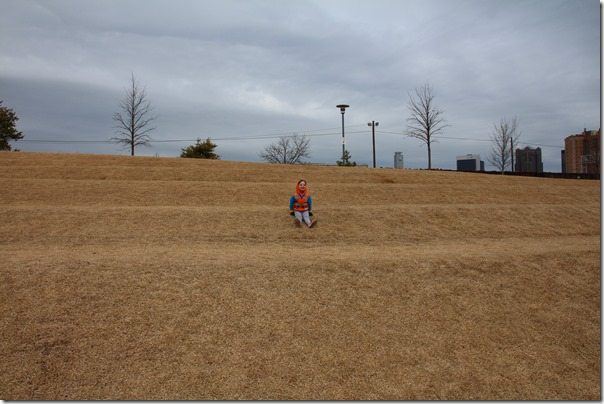 Ali and I proceeded onward, walking some and running most, her asking me to count down the hundredths of the miles until the end of the race.

But the last stretch made it all worth it for her – they were watching for bib numbers and called her name from the loudspeaker, then we received our medals and they made a huge deal over her doing so well, and THEN we even got free blue Powerade. 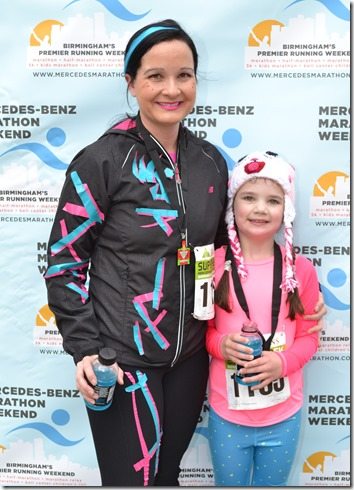 I’m pretty sure the blue Powerade was the tide turner, and maybe the fact that we were done running. 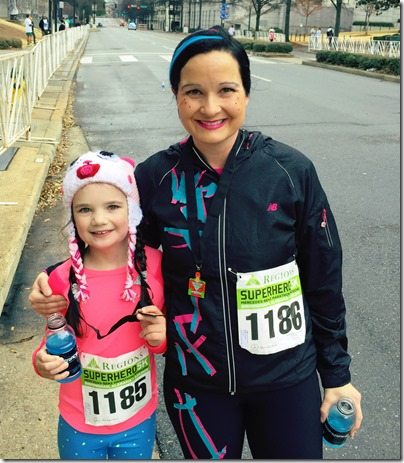 But whatever it was, she was thrilled, had forgotten all of her complaints, and informed me that she wanted to do another race in three weeks. 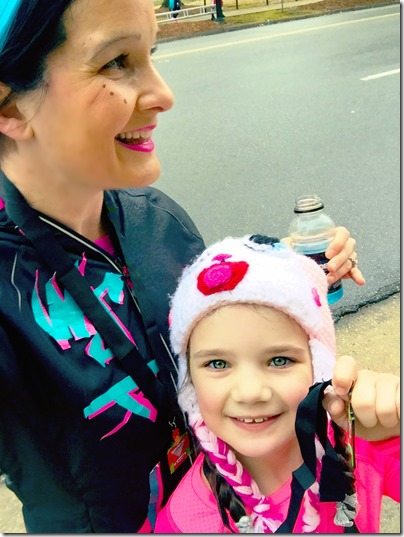 …and then we went to the coffee shop for Strawberry Cake. 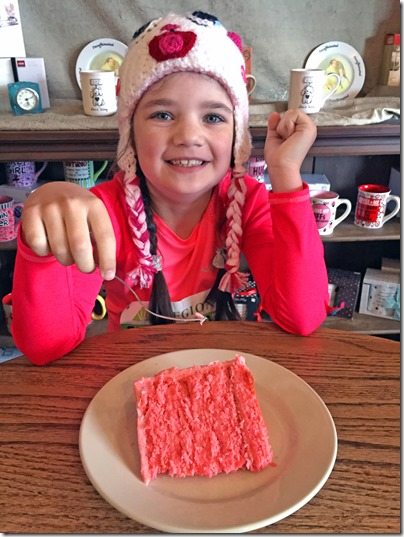 Because all Superheroes need to be recharged, whether they ran or not. 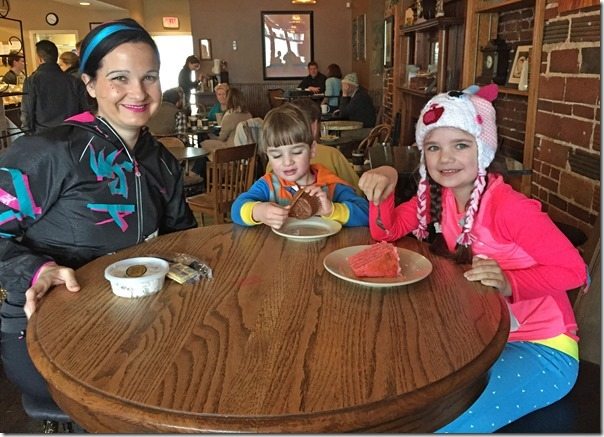 That afternoon, I had a mini-parent-panic attack when I realized that we left twelve minutes before the awards ceremony, that Ali’s time would have qualified her to place second in her age group in last year’s race times, and that they did not mail trophies.

If my personal racing newbie status disqualified my daughter from getting a trophy AND hearing her name called out at an awards ceremony, the Parent Guilt would never leave me.

I refreshed the race times page like a stalker as I heaped shame upon myself for not fully reading the race material.

And it was with a huge amount of relief that I saw my daughter was one place away from getting a trophy.

I heaped huge congratulations onto Ali for her fourth place finish, and onto myself for not robbing my daughter of a trophy.

And all was right in the world. 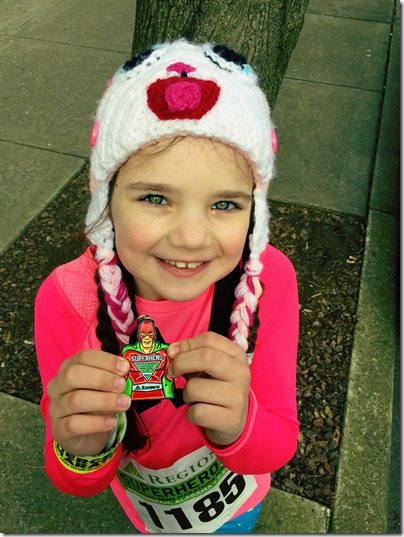 6 thoughts on “Superheroes on the Run.”