On Sunday night, Chris and I watched the next to last episode of Once Upon a Time’s Season Three

It featured a lot of Captain Hook (Also known as the beautiful and charming Killian Jones), along with a good deal of time travel. 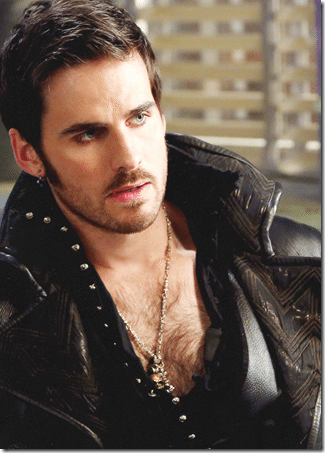 My subconscious was greatly impacted by these things.

The first time I noticed it was when I stumbled to the bathroom around 1am – stupid water intake.

When I headed back to bed, I ran into the door.

Chris sleepily answered, “Are you okay?”

…except that I heard his response in Captain Hook’s indeterminately British/Irish accent.

Perhaps Chris was also dreaming about Once Upon a Time. Or perhaps I’m just psychotic in my sleep. Most likely the latter.

Again in the sexy accent, “I’m sorry you’ve been hurtin’ your hands and feet so much t’night, Love.”

I got in bed, confused about so many things. My mind began churning at all of the questions.

Was my husband talking in a Pirate’s accent?

Am I awake or asleep?

I feel it necessary to say that I distinctly remember having ALL of the above thoughts. Then I drifted off to sleep again, confused but cozy.

When there was a Pirate on the end of our bed.

On the end of our BED, people!!

I lept out of my sleeping position and pushed him off the bed, where he presumably tumbled two feet to his death.

I heard a loud crash, then I felt an agonizing and stabbing pain in my arm.

That Pirate just slashed off my arm. My LEFT arm?! Seriously, dude? Have some respect for the left-handed woman.

Then the pain grew worse, and woke me up enough to realize that there was probably….not a Pirate lying in our floor, wounded by my heroic save of our Marriage Bed.

Then why was my arm hurting so badly??

I had no idea but considering that I’ve broken my nose and gone to the emergency room from sleepwalking incidents (and yes, those were two separate nights), I had no doubt that I was to blame.

For the second time that night, I stumbled to the bathroom. The pain was getting worse. My entire arm felt like it was being yanked, twisted, and set on fire in some sort of Sadistic Willy Wonka’s Torture Chamber.

I turned on the light and looked at my arm – no blood this time. An improvement!

….Were it not for THE UNENDURABLE PAIN.

I managed somehow to open an ibuprofen bottle and count out the maximum dosage (four pills. But I wanted more.)

Back to bed, where my water was on my bedside table.

But it was dark. And I’m left-handed. I reached out with my left hand and shrieked in pain at the movement. I had my pills in my right hand so there was no logical way to reach with my right hand. OBVIOUSLY.

Chris finally roused. I have no idea how that man can sleep through me fighting a Pirate off the end of our bed and getting mortally wounded in the process. Maybe because he’s had nearly fourteen years of practice.

He had noticeably lost his Captain Hook lilt.

I started crying. The pain was so piercing that I was sure I had decapitated my arm nerve.

“I can’t even reach my waaaaaaater!! And I need to take these pilllllls!! It hurts so baaaaaaaad!”

He handed me my water and started pacing.

“What are you talking about? This just happened!”

“Oh wait. You’re not talking about your infection from last week?”

“NO! Didn’t you see? I hurt my arm sleepwalking because there was a Pirate on the end of our bed! IT HURTS SO BAD.”

By this time, my fingers were curling up against their will and shot fireballs down my arm if moved. I was nearly certain that I had caused significant and irreversible nerve damage – I’d never be able to type again, to hold a pen again, to text again, to gently stroke my children’s faces again, to drive again, and I’d certainly never be able to unload the dishwasher or vacuum out the car again.

I began crying. Hard. Mourning the loss of my independence.

“I will take you if you need me to. You have a very high tolerance for pain. This has to be bad.”

I began reminiscing on our last middle-of-the-night emergency room visit – one that required many stiches in the center of my hand. Every doctor and nurse in that hospital popped into my room to hear me say it.

“I was sleepwalking and dove at our dresser to save my baby from falling down the stairs. The dresser has very sharp drawer-pulls.”

A few minutes later, presumably driven by the last visitor patting them on the shoulder and saying “Go ask Room 130 what she did to her hand. You’ve GOTTA hear this one.”, another doctor would peek in on me, feigning care and empathy.

I wasn’t ready for that again.

So that Chris could get some sleep, and because there was NO WAY I could sleep or even quit whimpering from the ever-growing pain, I went downstairs and laid on the couch, where I began trying to remember my Human Anatomy education.

Is there some sort of small arm bone that could be fractured?

This feels just like that time in 7th grade that I broke my wrist. My fingers are definitely doing the same thing.

Maybe I never sleptwalked and really I have bone cancer and I just dreamed that I injured myself to explain the pain. Maybe I’m about to die! Or worse – my arm is going to fall off!

I guess I’ll have to get X-Rays tomorrow. And maybe an MRI. And a PET and a CAT. A full-body scan would be most efficient. But I can’t drive! And Chris has a deadline. I’ll get my parents to take me. NO – I’ll get one parent to stay with the kids and one parent to take me. I DO NOT NEED my kids jostling me right now.

Then I began thinking about the more serious repercussions of my injury.

This means that I have already broken my first New Year’s Resolution!

“I resolve to run into less objects, which leave mysterious bruises on my upper thighs [and arms] that I then spend days trying to remember what exactly I ran into.”

But I always blog about my sleepwalking injuries, so that will count as my second resolution.

“If that resolution doesn’t stick, I resolve to keep a bruise diary.”

Because it’s going to be a good one. Unless I’m dying of cancer.

Once I had everything planned out, the pain subsided enough so that I could sink into sleep.

I woke up Monday morning with nearly-fully functional fingers, no bruise yet, and just an extremely sore forearm, which led me to presume that I’d most likely live after all.

And I did look – and there was not a Pirate to be found in the entire house.

…But I do think my husband can see the future in his sleep.

12 thoughts on “That Time I Fought Captain Hook and Won (Sorta).”