My husband is Clark Griswold. I’ve mentioned this a few times – in his house lighting projects, in his pining and chasing the perfect holiday moments, and definitely in his reaction when those holiday moments are ruined.

I have come to realize this, and so I prep him before Christmas morning.

“Honey, someone is probably going to whine. Brunch might get burned. A kid is going to fall down and hit their head and cry. Let’s agree to not react about it just because it’s Christmas and everything is supposed to be perfect. Let’s stay calm, let’s be ready for it, and let’s just let it go.”

But this year, it started too early for me to be prepared to prepare him.

At the end of November, we were setting out to see the Festival of Lights. There is nothing my husband appreciates more than a good Christmas lights show, and this was the first year of the first drive-through lights in Birmingham – an event indeed.

We all bundled up (for we heard there were fun activities afterward), and we began to head down the stairs to the car.

As we descended the stairs to the garage, we all sang a rousing family chorus.

The kids and I arrived to the garage first, and I began putting my camera and various accessories in the front seat. I half listened to the children as I worked.

It took me one second to realize what happened, and two seconds to open the car door in order to be able to REMOVE MY SON’S THUMB FROM IT.

Yes. It was his first finger slam, and it was actually lodged in the door.

In moments of panic, I somehow become completely calm. I picked him up and hugged him, going outside into the dark to allow his screams more air for reverberation.

I tried to calm the situation before Chris-Clark came down and realized that his Christmas Moment had been smashed in the car door, because then he’d need a Santa to kick across the lawn and we just didn’t have one available at that moment.

…but it didn’t take long.

So now I had Noah freaking out, Chris freaking out, Ali crying because she felt terrible (she is, after all, an eternally cautious child), and all I wanted to do was STOP ALL THE NOISE.

I walked Noah inside so I could sit down, which is when I realized it was worse than I thought: his entire thumbnail was filled with blood and seeping slowly outward.

(You’re welcome for not sharing a photo here.)

I sent Chris upstairs for paper towels and a band-aid, trying to get rid of him for a moment.

Which is when I heard a loud crash above my head.

Way too many minutes later, he came back down with a band-aid.

“There were no paper towels. Now I need to go back upstairs and clean up the garbage. And by the way, was that chocolate syrup in the trash can??”

“No. Really watery finger paints all mixed together. So you kicked over the trash can because there were no paper towels?”

I tried to think of another errand to send him to afterward – Tylenol! We need Tylenol.

Finally, everyone was moderately calmed down, and we set off on our journey. But Noah’s screams of pain every two minutes mingling in with the Christmas music that I kept turning up louder and louder was later described by Chris as adding dog poo to brownies, so I guess the music might have not been the best idea.

We arrived at the light show and it was exactly the distraction that our family needed.

Noah adored every minute of it and nearly forgot about his thumb, especially as the synchronized snowman frantically lit up to “Let it Go.”

But it didn’t take him long to remember.

“It feels like something’s bonkin’ my fumb over and over.”

“What your thumb’s doing.”

After the light show, we went to the kid area, where we were greeted by Olaf, Mickey, and many more characters.

To each one, Noah stuck his throbbing thumb in their face and said, “Ali smashed my fumb in the door. See?” 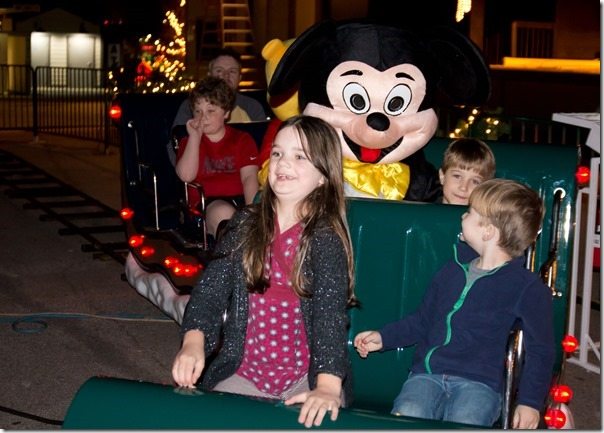 (Don’t miss Chris/Clark behind the nose-picking kid. Obviously still attempting to recover his shorn Christmas Magic. I bet it really helped to occasionally get holiday boogers flicked in his face.)

Noah was far too grumpy to actually get his picture taken with these creatures, but he sure wasn’t going to pass up the opportunity to let his injured hand photobomb his sister’s shining moment. 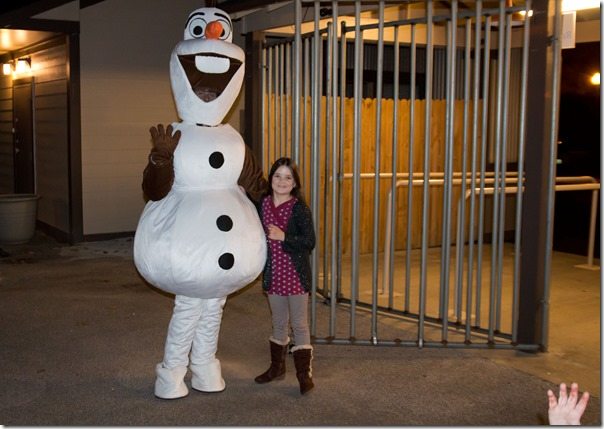 We loaded back in the car and Noah casually stated,

“Ali, you don’t like me anymore cause look.”, then stuck his thumb in her face.

A few minutes later, “Why did you slam my fumb in the door, Ali?”

Several weeks later, the thumbnail has let go, although Noah has yet to do so himself.

He still shows his now naked thumb to everyone he meets, explaining, “Ali slammed my fumb in the car door.”

And, he often adds a fashion statement – or perhaps a layer of protection – for the rest of his digits. 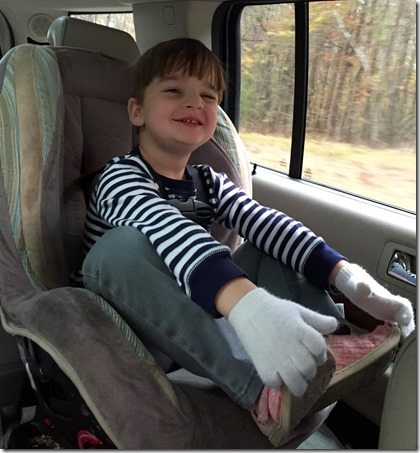 And Chris? Chris is manically finding other holiday activities for us to do, trying desperately to wash the memories of Christmas Ground Zero from his mind.

And every time we head down to get in the car, he reminds us all.

“Don’t slam anyone in the door!”

7 thoughts on “The Thumb of Christmas Present.”