If you ask Ali what she’s going to be when she grows up, she’ll tell you that she’s going to own a bakery (and that she’s an artist). The bakery is a big deal to her, and we have many urgent conversations as to the particulars of running the business, as she’s deeply consumed with the looming responsibilities.

They happen randomly, in a moment of silence in the car, right before bed, or during dinner.

“Mom, how do I know how much to pay my employees?”

“I think I definitely want to pay people more.”

“Hey Mom, when are we going to Gramamma and Pop’s house?”

“Well, I need to talk to Pop about building some of the things I’ll need for my bakery. Like the cases for the cakes and the tables and chairs.”

She’s lucky to have an accountant for a mother, as she’s started discussions about profit and loss, variable and fixed expenses, whether or not she’ll need her Fireman-Aspiring-Brother’s services (hopefully not), what we should name the restaurant (She wanted to go with “Ali’s”, but there’s a bar downtown that we pass regularly that is called “Al’s”, and with the apostrophe it looks a lot like “Alis” and she doesn’t want to copycat so she might go with “Alana’s” instead), how she can incorporate her role as an artist into her bakery, and the fact that she definitely wants to work the cash register and hire people to do the actual baking.

Chris is all in on the bakery plans. We were running down Morris Avenue a couple of weeks ago and he pointed out a beautiful vintage two-story building for sale.

“We could go ahead and buy this for Ali, live in the upstairs, and rent out the downstairs until she’s ready to open her bakery. Morris Avenue is going to be THE place to be in Birmingham in 15 years. Mark my words.”

He’s also trying to convince me that if she keeps on this path, we should sign the kid up for some college business classes in high school (the perks of homeschooling) and then use her college fund to launch her bakery career.

That’s all good and wonderful but I think they’ve both got it wrong.

Greatly inspired by reading the series Diary of a Wimpy Kid, her own personal diary, stuffed with illustrations and great emotion, is truly a work of art. I adore getting caught up on it to see how she decided to portray the events of our lives. 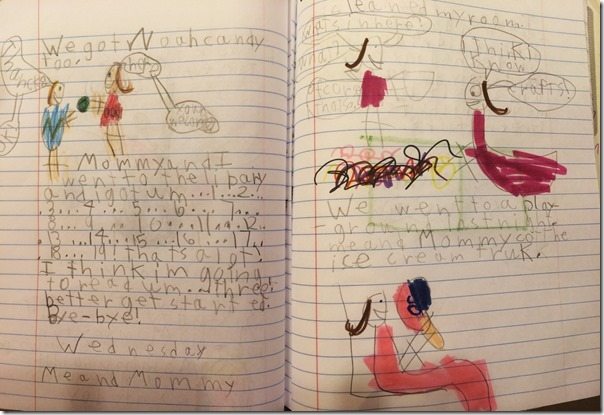 (That scribbly pile of crap is definitely an accurate portrayal of “before” in her room.)

Also, she gets really excited when our English book gives tips on story creation, such as when we learned how to make a word web, she insisted on me giving her a new notebook just so she could create word webs every day before composing her version of family happenings in her beloved diary.

Writing is a lovely and flexible thing, though, and can often be done alongside or even about one’s main career. Ask me how I know. So maybe she will own that bakery and maybe she’ll write the stories of interactions with the public, since she’ll be running the cash register. But I am confident that somehow, she’s going to be writing voluminously.

Which is why, when we got to the section in her English book about the process of writing, I told her that I used this very process every day. Then I, for the first time ever, read aloud a blog post to my daughter.

It was so strange since the post was partially about her, and she wasn’t portrayed completely innocently (it was The Runaway Incident, and I didn’t sugarcoat nor did she deny her tattle-taleing tendencies.)

She was, for the first time in a while, really excited by something I had done. She forgot that she was supposed to have an air of unimpressedness when it came to her mother’s ideas, and begged me to start reading her more stories that I’ve written about her.

I agreed – as soon as we finish reading The Last Battle, our next read-aloud “book” will be…my blog.

And now I find myself, as if I’m about to read to The Queen of England, under a lot of pressure.

I mean, I knew she would eventually read my blog – I always have. But I unreasonably assumed that it would be after she had kids of her own and therefore could read through the context of motherhood. Instead, I guess she’s going to get a crash-course in motherhood-reality from me.

Then there were other issues.

How many stories should I skip? What am I going to read to her that I don’t even remember writing? Will I have to censor myself to read myself to my daughter? Is there anything I’ve written that she’s going to get mad or embarrassed about the fact that I published it? Will she understand my sarcastic style or hear it as complaining about motherhood?

Should I start in 2008, when my writing was crappy and my stories were poorly thought-out and edited, but I had adorable toddler-Ali stories that she will love? My orderly brain really wants to start at the beginning, but this is an exercise in teaching Ali how to write well.

But the most pressing question is: will she like how I’ve portrayed her childhood? 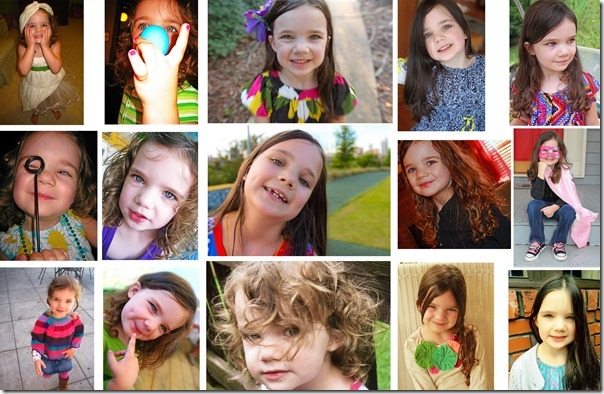 One positive, though, is that I’m really excited about the opportunity to read my blog aloud with the inflections and tone in which I wrote it. Because who knows what tone you guys are reading it in – maybe you think I’m a motherhood-whiner. And who knows what tone Ali would read it in if I left her to discover it on her own in her angsty tween years when she’s already convinced that I’m the enemy.

It will be an experiment. And it will be interesting to see how long it takes her to get bored with me…and therefore, herself.

One way or the other, we’re going to learn a lot about each other…and ourselves.

18 thoughts on “The Tearing of the Veil.”