It was bath night.

We had been to the playground, we had eaten popsicles and let them drip down our entire being, we had handled with our bare hands an opossum jawbone found in the wild (another story for another time), and, most compellingly, it was technically our twice a week appointed bath night. 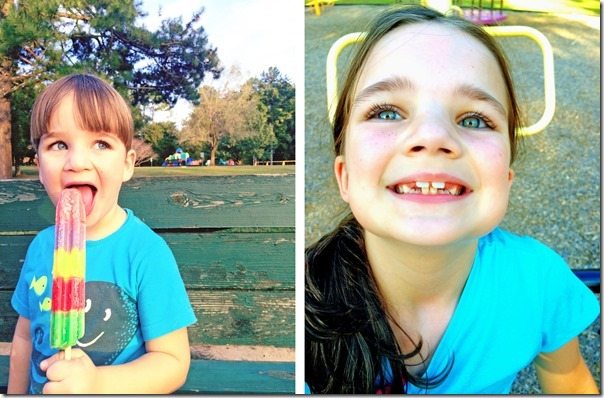 There was no escaping it. There was only pushing through it as quickly as possible.

I threw Noah in the tub and started scrubbing his head before he even had a chance to sit down. He wasn’t exactly joyful about my aggressive approach, but complied with my wishes anyway.

Ali came in to prepare for her own bath, when she gave a tiny shriek and said, “A roach!”

There are certain triggers in life to which I cannot be responsible for my feedback. Cockroaches are chief among them. As I’ve mentioned before, Chris knows that if he ever hears me scream like I’m being murdered slowly by butter knife, he simply comes running with a cup.

It didn’t help that the roach was running quite actively down the wall right next to the bathtub, of which my son was in and I was directly on the other side. I jumped out of the way as I let out my sound of fright.

And that’s what did it.

You see, roaches usually like coming out late at night, so Noah rarely hears my war cry, which meant that he didn’t remember ever seeing me truly frightened since roaches are my only nightmare.

Apparently, being three and a half and seeing your mother scared is quite the traumatic experience.

And so, he responded in a completely new-to-him way.

Seriously. I had no idea he had that note in him. I don’t know what it was but I’m positive it was actually higher than the beginning of any Mariah Carey song and louder than the monthly tornado siren test. And he didn’t stop at just one shriek – he gave five in a row – long, loud, sharp, and exquisitely painful.

My ears. They bled. They rang. They ached. The windows quivered in fear. The judges from America’s Got Talent heard him from their respective corners of the earth and all called at once to beg him to audition.

Then Noah started crying. From overexertion, I’m sure.

Meanwhile, the roach had scampered off of the wall and was on the floor out of eyesight, right behind the Bath Stuff Basket.

Chris heard all the commotion from downstairs and, since I was joined by two other screamers this time, he wasn’t positive of the cause. He came loudly sprinting to see who was throwing us out the window one by one. I pushed through the ringing of my ears to greet him with, “It’s a roach!”, the main purpose in being him not freaking out over us freaking out over nothing.

He told Noah to calm down, told me to move, and then he pushed the basket out of the way.

And there he was.

The villain that had upset the entire balance of our family.

Dead as a doorknob dead.

Flipped over on his back dead.

Just twenty seconds ago, that very same roach had been defying gravity, running up and down the wall at Roadrunner speeds, clearly ready and able to participate in a Couch to 5k. And now he was as dead as dead could get.

There was only one explanation, only one possibility as to the cause of death.

My son had killed him with his screech.

And now he’s my favorite forever.

19 thoughts on “When Death Is Stranger than Fiction.”