The kids were playing outside while I was lounging flat on my back on the porch swing.

(That happens more than it should. But Motherhood as an introvert is exhausting.)

(And I’m exceptionally good at lazy when I want to be.)

Noah needed to go to the bathroom, so he headed over for me to unbutton and unzip his pants, then shuffled inside.

But it’s fall, y’all. And the kid had on blue jeans.

So he couldn’t get them off.

He came back outside and I wrestled him out of his jeans – because toddler jeans are nearly as hard to manage as women’s skinny jeans.

He sprinted back inside, naked from the waist down this time.

I continued my lounging in peace, scrolling on my phone, reading my tweets, doing all the things that one does when laying flat on their back in a gently gliding swing on a beautiful fall day.

After about fifteen minutes, I realized that Noah probably should have returned by then to collect his pants.

And then I remembered that he was especially gaseous as we were wrestling him out of his jeans. At the time I assumed it was from all the straining, but fifteen minutes later, I recognized the more likely cause.

He had to poop.

And he doesn’t wipe his own butt.

(I have been exiled to nearly eight years of constant butt-wiping. The day that I don’t have to wipe anyone’s butt ever again is going to be one with much rejoicing.)

So Noah. He was probably still sitting on the toilet, waiting for me to come clean his hinder, no way to reach me since he, unlike the rest of the first world, cannot text while pooping.

I went inside and was greeted with an aroma that confirmed my suspicions.

I walked in and he was still calmly sitting on the toilet, most likely straining his vagal nerve and germinating toddler hemorrhoids due to my negligence.

“I’m so sorry, buddy. <wipe, wipe> So…what exactly was your plan? Were you going to sit here all day until I came?”

“Well, I yelled and I yelled for you, but that just made me poop more. Did you see all those poops in there?!?”

“Well then, I guess it worked out nicely!”

I got him cleaned up and washing his hands and thanked him for waiting patiently for me. Which is when he looked at me with love and adoration in his eyes and said,

And that’s how a boy melts his Mom’s heart…with feces. 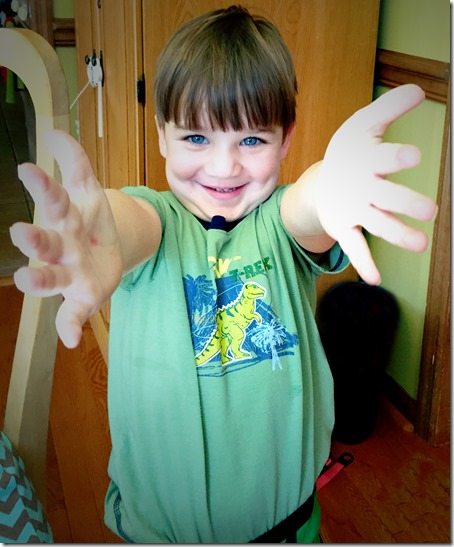 On yet another round of “Mommy lays in the porch swing while you kids play nicely together,” Ali and Noah were drawing with chalk in the driveway.

They seemed happy and especially giggly, so I let them alone until it was absolutely time to call them inside.

That night, we were all riding in the car together when Chris mentioned,

“So either Ali’s handwriting has gotten really good all of a sudden, or she convinced you to write ‘poop’ on the driveway.”

“Whaaaa?! I didn’t write poop on the driveway!”

“Are you sure? Because it was really, really well-written. I stared at it for a minute, then said to myself, ‘well, I guess Ali asked Rachel to write it and she did for some reason.’”

“I did NOT write poop on the driveway. I do remember them talking about a toilet, though…”

“Oh! I saw that too and thought it was a giant white finger pointing to where she had written poop.”

Ali was listening intently and finally chimed in.

“I was the one who wrote poop on the driveway. And underneath that, I drew a brown, lumpy…”

When we got home, Chris let me out of the car and he shined the headlights on the artwork du jour so I could experience it for myself.

And I must say, she really does deserve an A+ for those letters. 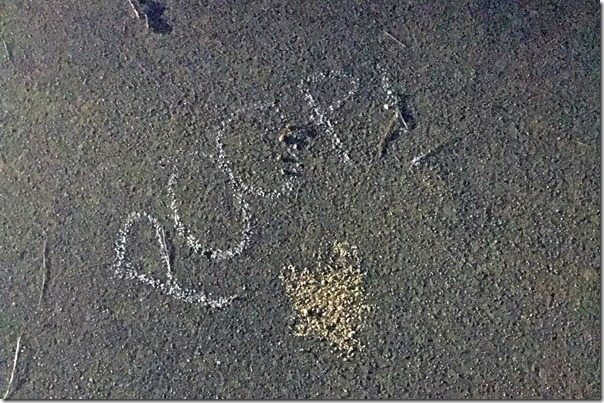 As well as marks in thoroughness for making the inside of the toilet bowl yellow. 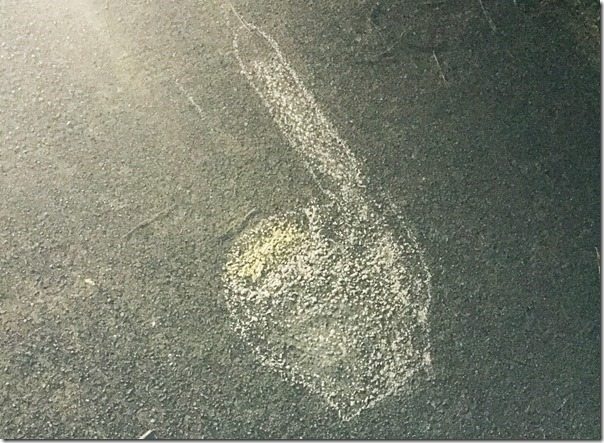 I got back in the car.

“And did you know that it’s not supposed to rain for over a week?”

The next day, my Mom stopped by. Noah dragged her to the driveway to show her the new facilities, as well as to demonstrate how very talented he was at squatting over the potty and pretending to use it.

And I’m going to have to start baking daily Apology Cookies for my neighbors.

16 thoughts on “Tales from the Porch Swing.”