I survived my first two-day art show for Picture Birmingham. Here were the moments I won’t (or, in some cases, can’t no matter how hard I try) forget. 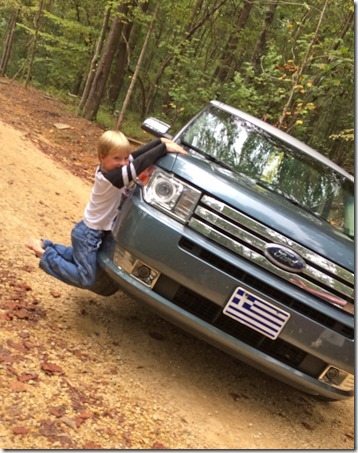 That’s my friend Radford, illustrating exactly how stuck I was. And no, I do not have four-wheel drive. And yes, it did make me late for my setup appointment.

I dropped the kids off at a friend’s house, and as I was backing out of their driveway, using my trusty backup camera as always, I discovered that they had a perilous and quite invisible trap awaiting any and all visitors who attempted to use the Evil Weapon of Reverse on their property. 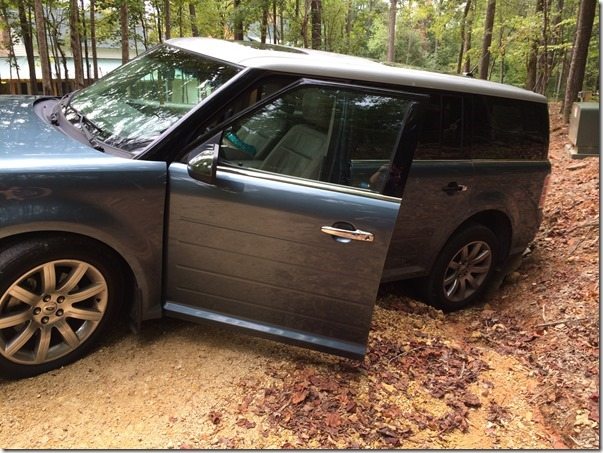 Radford was able to find an assistant who pulled me out of the ditch in five seconds, clearly demonstrating that they’ve done this before. Because people with traps utilize them often. 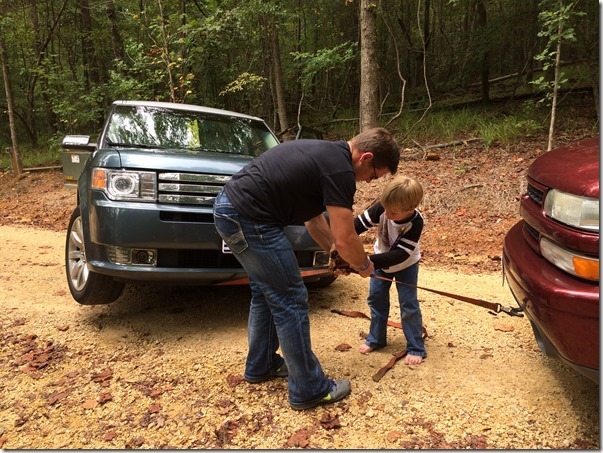 People watching is supreme at art shows. I spotted a girl in a t-shirt and panties (okay I suppose they were technically hot shorts but they were bright shiny spandex (with stars) and created a dreadful case of underbutt, side butt, and just butt butt.) Later, I saw another girl in huge baggy blue jeans and a bra.

Between the two of them, they had one quite wearable outfit.

I saw a dude in a Grumpy Old Men winter hunter’s hat and another dude in a full length leather jacket. Between the two of them, they had the ability to cause death by overheating. 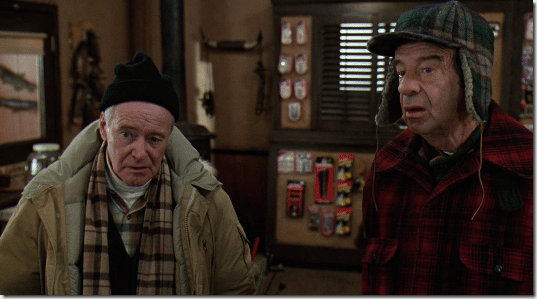 Meanwhile, I melted in my sleeveless shirt and shorts. Because that’s how I roll – fully dressed minus suffocation.

4. I will do anything for love…but I won’t do that.

One browser asked me, “Do you have this picture in black and white?”

…Later, Chris said, “But the customer is always right! You could have special ordered it in black and white…” 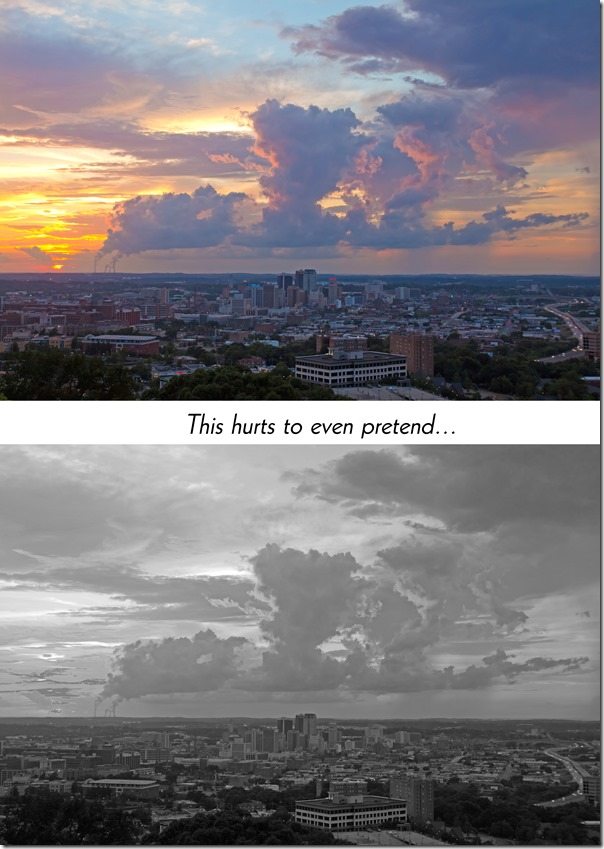 A sunset in black and white is worse than a scented résumé in Comic Sans with a Curlz header.

On Saturday morning, another artist came over to my booth.

“Hi! I thought I’d walk around and see the other booths before things got started. But of course I’m not going to BUY anything from you. I LIVE in Birmingham. Ha! WHY would I ever want a picture of it?”

She then went on to curse me. Literally.

“I’m putting the Artist’s Curse on your booth. Do you know what that is?”

Well okay then. Everyone loves a good solid curse to start the day.

6. Finally finding the pot of gold.

I NEVER see rainbows. I’ve even gone out on rainbow chases, and let me tell you – they’re much harder than sunset chases.

But then, at the beginning of Artwalk, a beautiful, bold, double rainbow came right to me. 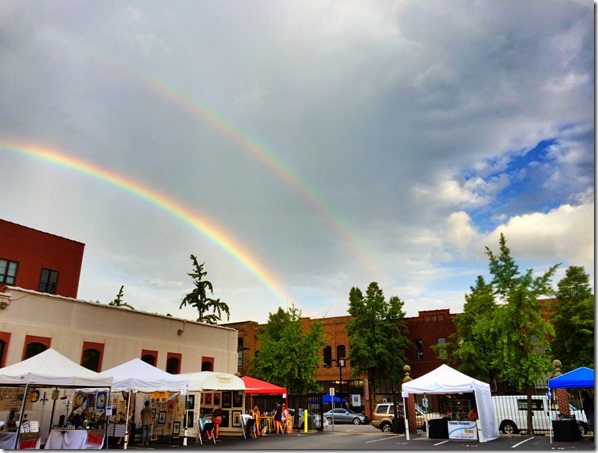 …and only brought twenty drops of rain with it. Totally worth it.

So, so SO many of you came to see me. I really should have kept a list because I lost count of everyone who came by. AND I had so many Instagram notifications that they all rolled off before I got back to everyone to thank them, so please know I meant to but…it was kind of a hectic two days. I never left my booth for the entire eleven hours of Artwalk. But I enjoyed meeting every single one of you and I was so honored that you’d come visit me. Thank you all! 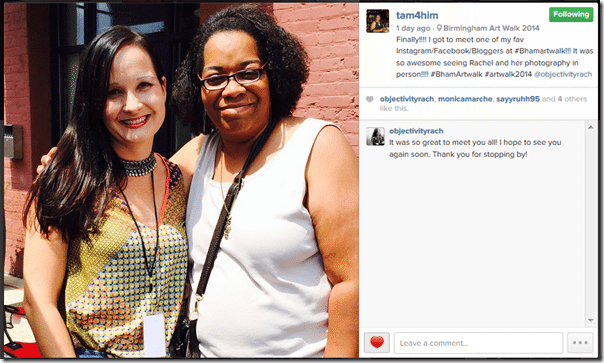 7. Freaking out someone else’s kid for a change.

Although I adore meeting blog readers, Ali and Noah are not always as excited. They’ve been known to be completely weirded out when a stranger references what they did last week.

I spotted my blog friend Katy and her family coming toward us, and greeted them by name.

Her oldest son looked at me, looked at his mom, and said suspiciously, “Uhhhhh….how does she know our last name?”

It was a beautiful moment.

My kids had just returned from the football game, so they were able to dispel any amount of creepishness that I had given off, and even crossed the Alabama/Auburn borders to do so. 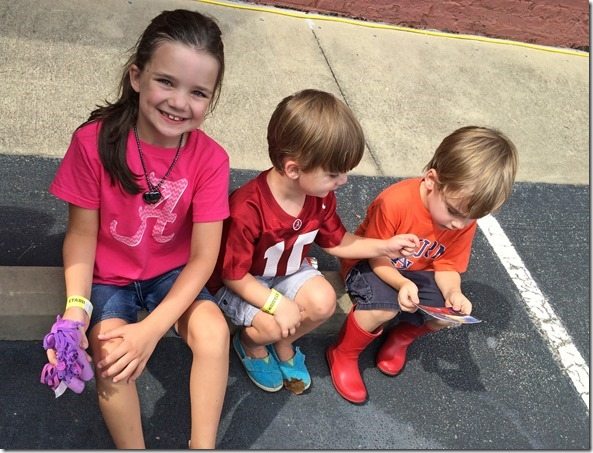 The cousins came by to visit with their craft that they made at the Artwalk kids area. Fans that they decorated with…glue and glitter.

I’ve never seen my brother and sister-in-law so sparkly.

It was the end of the second day, and Chris left to go get my car to start packing everything up. My very last visitors walked up – two women and a younger man. The ladies were thumbing through some prints, and I watched as the gentleman walked straight to one print, picked it up, looked at it closely, then showed it to the others.

They were all exclaiming their wows at some detail in the print, so I went over to see which picture it was.

It was my bamboo picture. 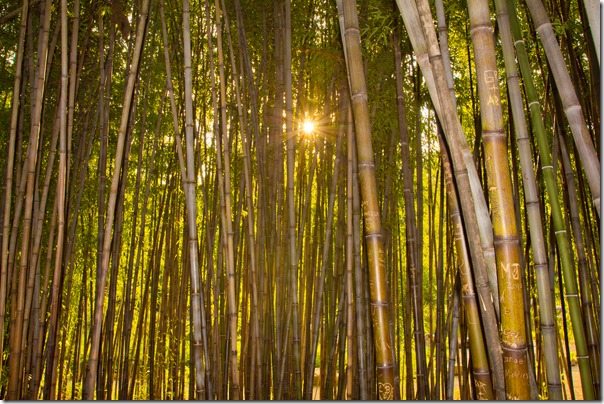 “What’s so interesting about the photo?”

”It’s my name. Right here. I carved it last year.” 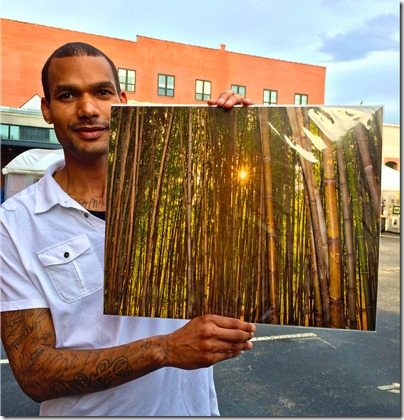 Just one day before, I had told another visitor that I harbored a secret hope that one day one of the name-carvers would find my picture. (After all, I had worked hard to get those names and the sun in the same picture, as I can appreciate a name being left behind.) Then I quickly explained that I knew that was silly and it would never happen.

And my day was made.

It was a great weekend and I was able to raise a very good amount for The WellHouse. Thank you to all of you who came out to say hello!

15 thoughts on “The Moments of Artwalk.”