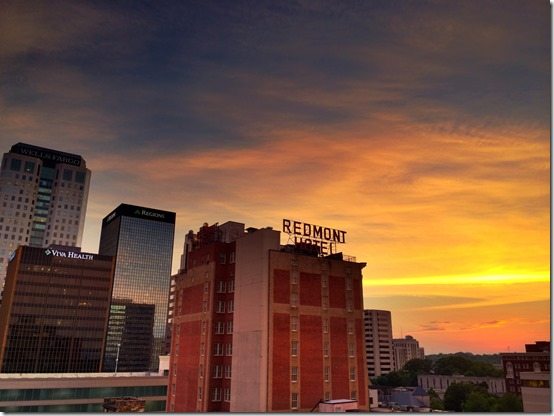 “Hey…did you know The Redmont Hotel is still open? I mean, who knew, right?”

I groggily recounted this extraordinarily urgent information to Chris at 6:15am Saturday morning. I had not slept all night, and was entrapped in a heavy delirium that later made it impossible to walk in a straight line.

“I mean, I figured that place had been closed for years. Decades even. You never hear anyone say they stayed there! I mean, have you? But Jamie and I Googled it at lunch a couple of weeks ago and it’s still open!! Isn’t that fascinating?”

“We should really go there sometime. I mean, we should know what it’s like, right? It’s like…a historical marker or something.”

“Umm….What all did you take to try and help you sleep? And at what time?”

I recounted the list of things I took, all within legal and somewhat recommended limits.

“Are you going to be okay today?”

“I hope so! I should get up and run since I can’t sleep!”

As Chris was leaving for the football game, I tried to set his mind at ease.

“I think I figured it out around 3am. There’s this part of my brain – like a real, physical lobe or something – that I have to use to talk to lots of people. But if it gets activated, it can’t shut down. Like…ever. Or at least for a lot of hours.”

Despite my lack of mental clarity at the time, I actually think I was right.

However, when I need to, I can Transformer-Style morph into an extrovert. If I find myself in an extended situation of extreme extroversion, as I was at ArtWalk where I talked to hundreds of people for six hours straight two days in a row, my brain is able to compensate and allow me to become a temporary extrovert.

However. Once that switch is flipped, I become immediately and intensely aware that I can forget about sleeping. Because my brain will refuse to shut off, no matter how many magically delicious melatonin gummies I chew.

It’s not even that I’m thinking – it’s almost as if I can feel my entire brain buzzing. It plays songs on repeat. It has imaginary conversations that make no sense. It will play iPhone games – all in my head. I cannot escape from my brain, and it holds me hostage with no excuse.

The ability to switch back and forth, according to the aforementioned friend Jamie (who is an Extrovertedness Evangelist), is called being an Ambivert. An Ambivert is someone who has both an introvert and an extrovert side, like having a multiple personality disorder without the loss of memory.

And apparently Extrovert Me is an acute insomniac.

I believe this is because I don’t let her wake up very often, and so when I do tiptoe up to her bedroom door and knock softly, asking her to come out and take over for a while so that Introvert Me doesn’t curl up in the fetal position at the thought of talking to hundreds of strangers, she is like “HECK YEAAAASSSS!!! Do you KNOW how long I’ve been locked in this room? It’s been like two years!! PAAAAAAARTYYYYYY!!!”

(For those of you properly educated in the subject of My Little Pony, imagine Pinkie Pie after having found herself locked in a dungeon for twenty-four months. Now picture her delighted, screaming face pointed at the sky. That’s Extrovert Me.)

And then it takes ten bouncers in my head to shove her back into her cell and lock the door.

There’s only one thing worse than not sleeping because of Extrovert Me bouncing off the sides of my brain.

It’s if Introvert Me returns too quickly.

Because then she keeps me up all night also…but in complete and utter horror…recounting every conversation Extrovert Me had with every single person I saw, conjuring up ways that I probably offended half of them, confused half of them, and looked like an idiot to all of them.

Because that’s what introverts do.

Partying all night like an extrovert is always preferred.

So. How does your brain work?

Editor’s Note: That very Saturday, Jamie came to see me at Artwalk and said, “By the way – did you hear that The Redmont closed?” My efforts to confirm this rumor have been unsolidified, but seem to point in that direction. So I sure am relieved that I was able to convey that timely information to Chris at 6:15 that morning.
Updated: The Redmont is undergoing a renovation and will be reopened as a Hay Creek Hotel. Thanks to Katherine for the tip.

33 thoughts on “The Cost of Extroversion.”