In a huge announcement of unprecedented importance, Jell-O proclaimed that they were releasing University of Alabama Jell-O Molds

(Along with molds for 22 other Universities

, but I’m positive none of them took it nearly as seriously as Alabama fans.)

Because I love my husband and I’m a sucker for a good Jell-O mold, I immediately went to my personal shopper (named Amazon) and bought a set for my family. 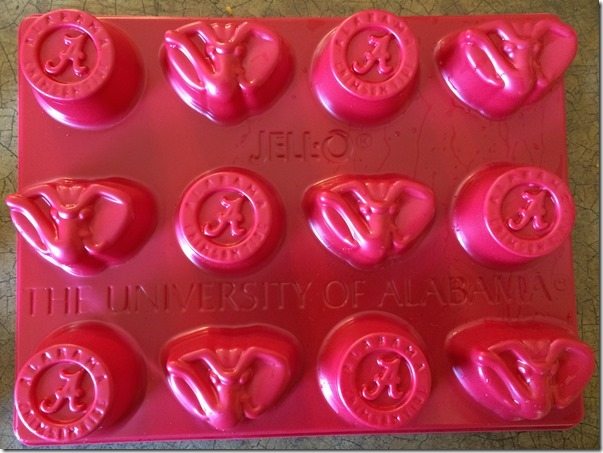 However, my purchase was made amidst great state controversy.

Not only was this exciting news for football fans, it was also exciting news for the Alabama political machine. Because, you see, at least one lobbyist immediately condemned these Jell-O molds for fear that they would encourage underage drinking.

I would like to say a few things to this lobbyist.

2. “I wasn’t going to drink while underage, but now that there are Jell-O molds for my University, well, that changes everything!”, said no college student ever.

3. Silly Lobbyist, Jell-O Molds are for Kids. Err, kids too young for underage drinking, that is.

To prove it, I present to you, my children.

There’s nothing my kids enjoy more than preparing for a Football Party, so I gave them the beautiful new Jell-O molds. Because football is upon us, y’all.

I wanted to delve into all the ways these molds could be used, so I bought chocolate, my favorite candy melts, and had the Jell-O that came with the molds. I also figured we could use the molds to create ice cubes.

There were two molds, which were apparently quite stuck together. 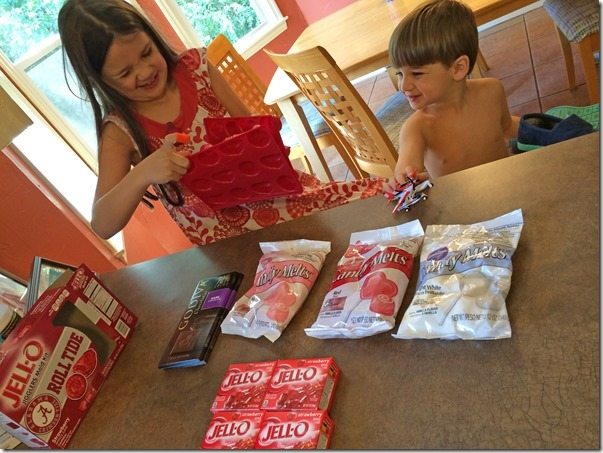 But that did not deter the palpable excitement in my home. 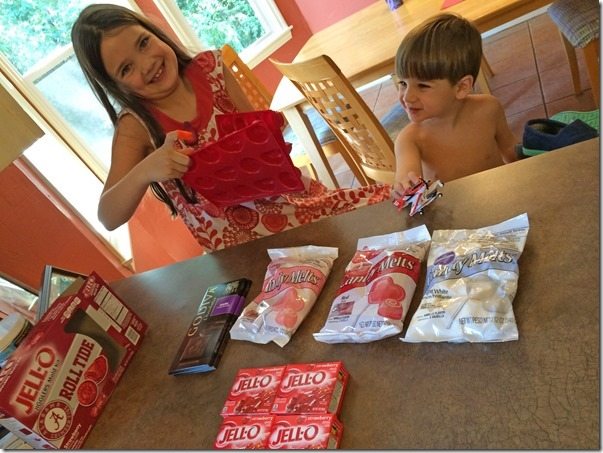 Okay no really. Were they superglued?? 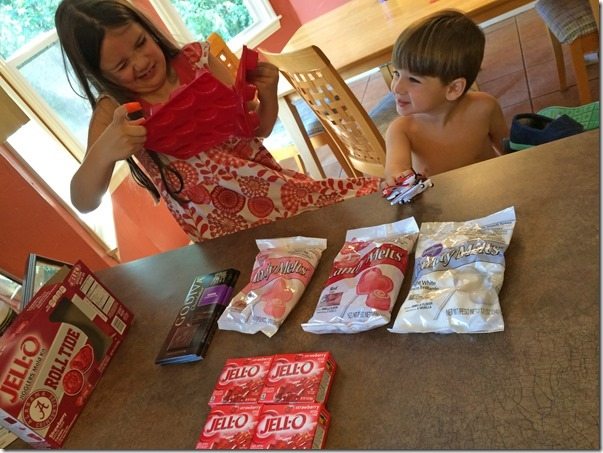 Noah even got in on the action. At least in moral support. 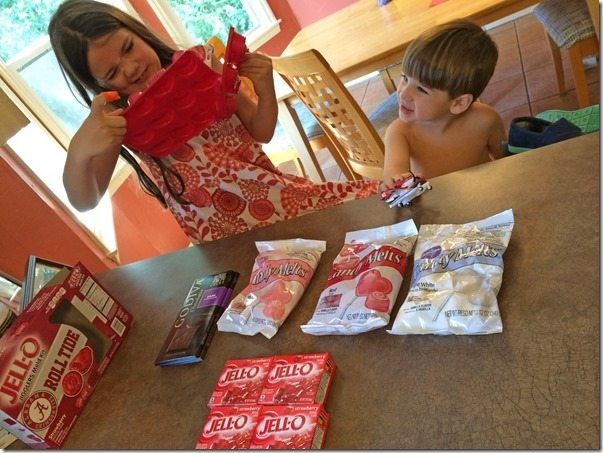 Finally, my daughter found the strength within herself to pull them apart. 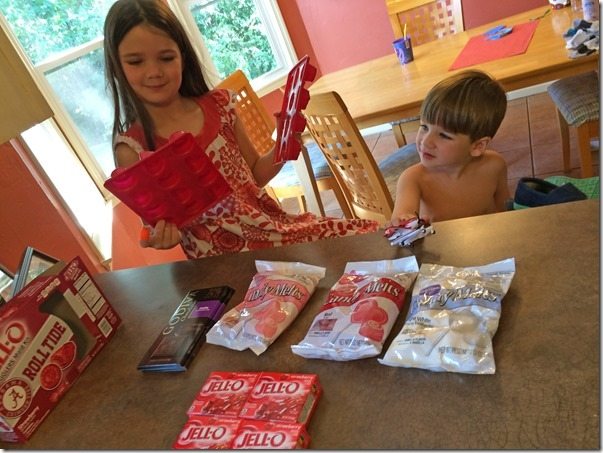 They wanted to start with candy melts, and I didn’t blame them – it’s the purest form of sugar, and it seems to travel straight to the blood stream. 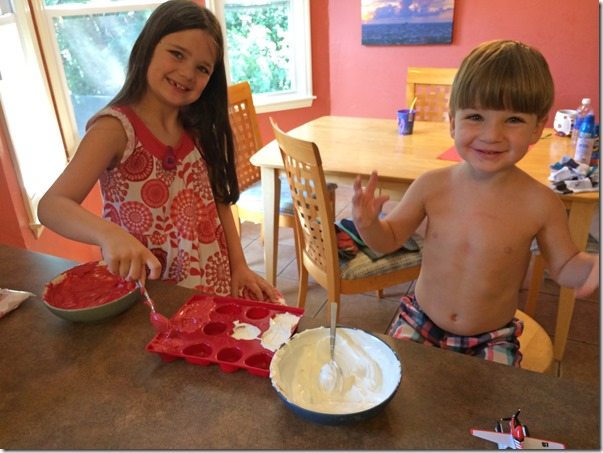 It can even be absorbed straight through fingers! 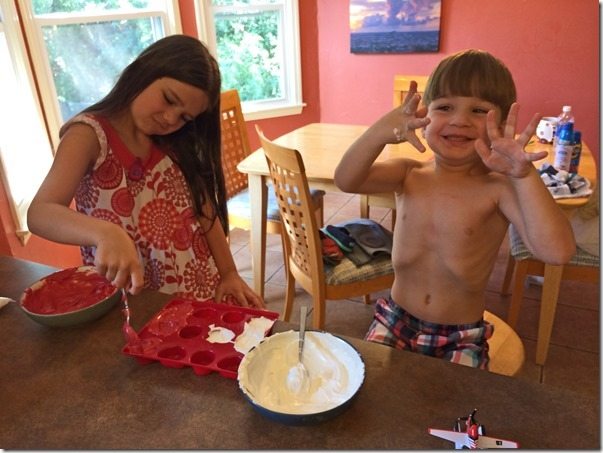 We melted and poured, then dropped the mold on the countertop a few dozen times to beat out the bubbles. 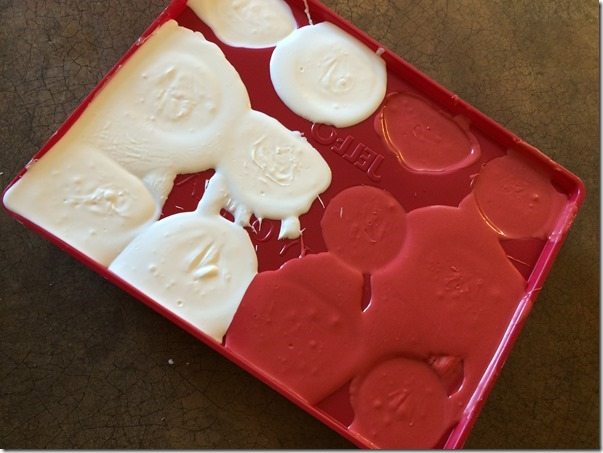 After refrigeration, they came out beautifully, although next time I will fill the molds halfway to prevent the messy bottoms and make the serving size of straight sugar a little less coma-inducing. 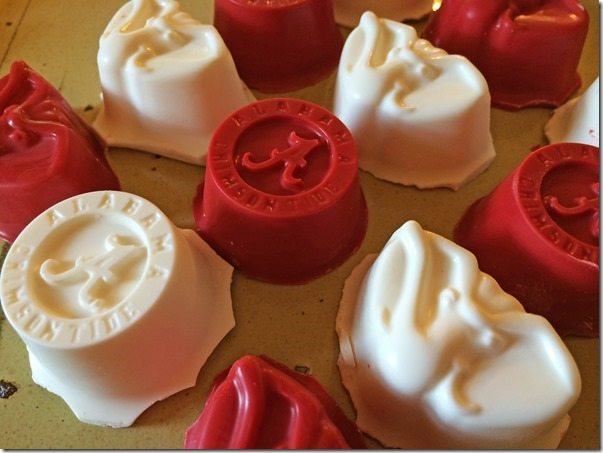 I’m always amazed at how quickly Jell-O cooks, as opposed to my childhood when it seemed to take five lifetimes.

Noah, however, did not agree. 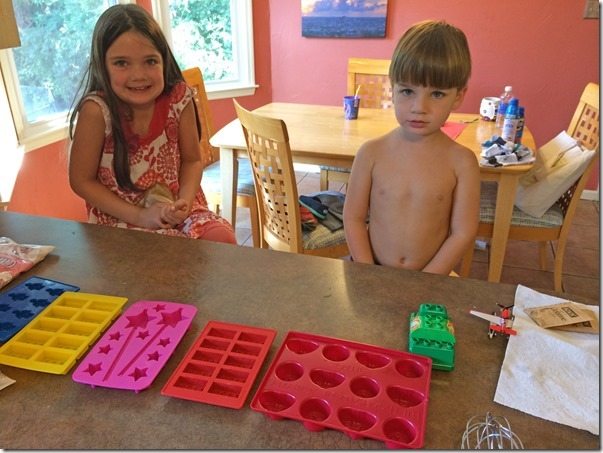 He aged fifteen years in that two minutes. 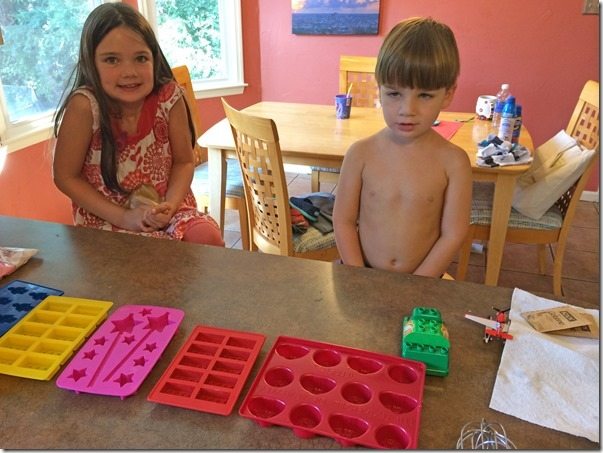 While we’re waiting for a boiling point, let’s talk about the background of my picture, also known as Random Clutter on Rachel’s Kitchen Table (RCoRKT). 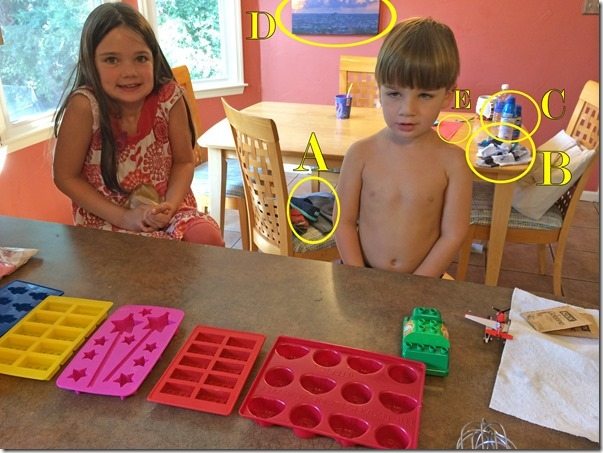 A: Two pairs of Noah’s Toms (my hypocrisy grows daily) and my running knee braces. Because that’s what belongs on chairs.
B: Running Socks. Hopefully just washed and laid out to dry, but there’s no guarantee that they hadn’t been sweat in.
C: Sunblock. Which is puzzling since I nearly never sunblock my children. Because hey – skin grows back, right?
D: A really unique sunset canvas. There’s this site where you can get one of your own…or use it as an excuse to come see me in person!
E: An Underwear Chart. Need I say more?

The water finally boiled, and Ali immediately volunteered to stir in the Jell-O. Noah, meanwhile, had moved onto other pursuits. 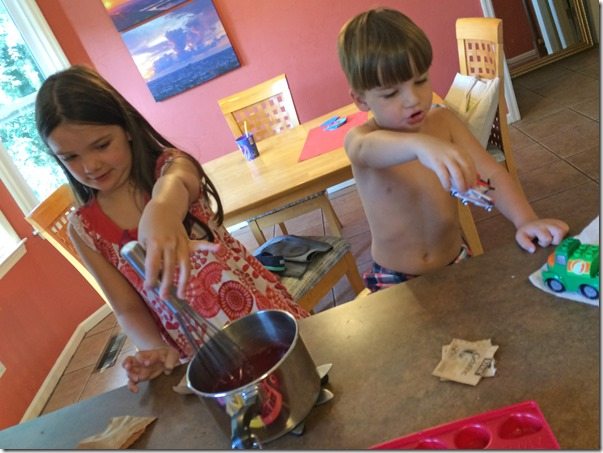 But he’s never one to turn down a chance to splash and spill hot liquid, so he did take his turn. 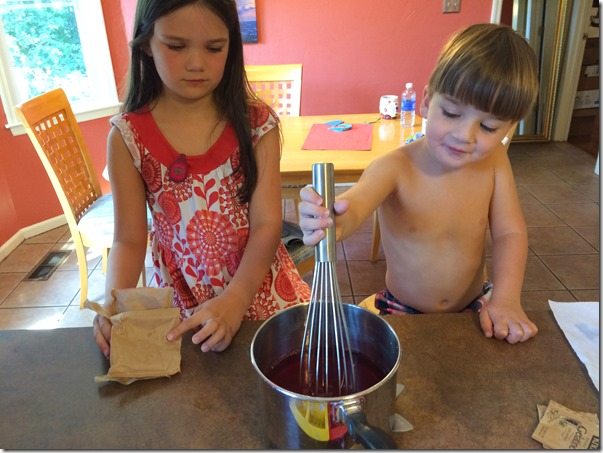 We pulled out our Lego and Magic Wand molds and filled nearly everything we had. 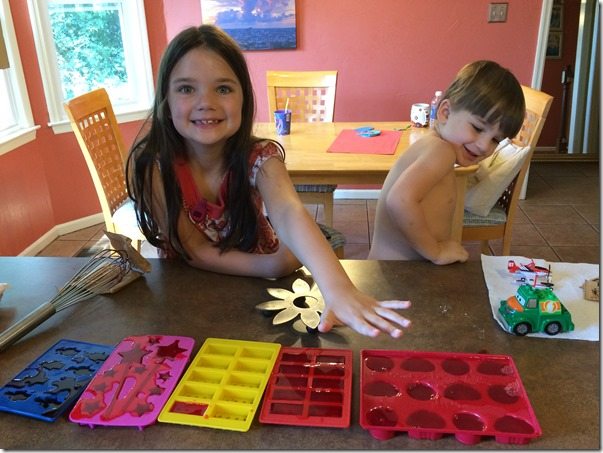 The Jell-O came out just as beautifully as the candy, albeit harder to photograph. 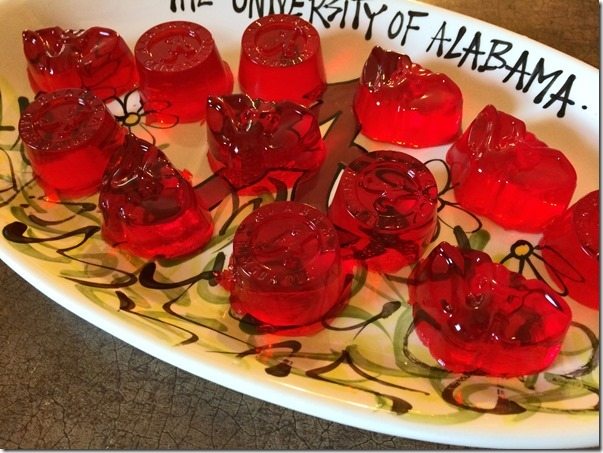 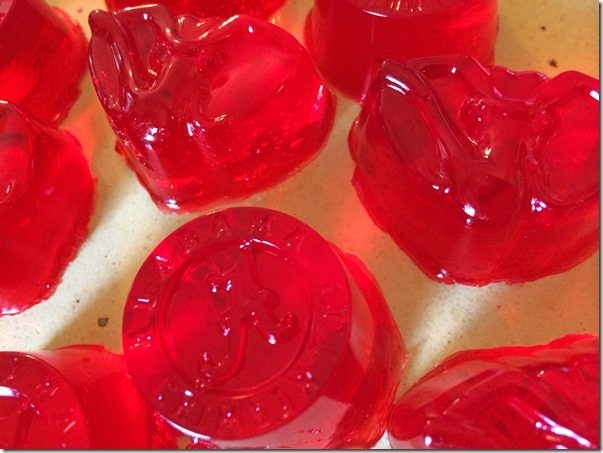 And, although we haven’t melted our chocolate yet or made our ice cubes, we’re ready for tomorrow. 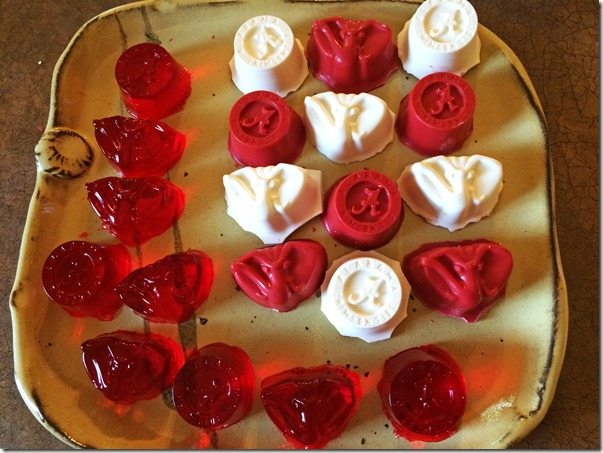 To some of us.

Disclosure: Jell-O did not sponsor me or this post. Nor did lobbyists, Alabama Football, or children. Okay – maybe the kids did. They did get a lot of sugar out of it, after all.

14 thoughts on “How to Properly Use Alabama Jell-O Molds.”