I’d rather dance through a hunting reserve in a deer costume than go to Wal-Mart. Ever.

There’s just something about the atmosphere there that immediately stresses me out – I’m pretty sure God removed His presence from all Wal-Marts many years ago after one too many scary human sightings.

No matter how little I appreciate Target’s underwhelming sales events, they are Miley Cyrus in Hannah Montana and Wal-Mart is Miley Cyrus on stage with Robin Thicke.

Target is Anthony Bourdain and Wal-Mart is Adam Richman with Guy Fieri’s hair.

But it was my husband’s birthday. 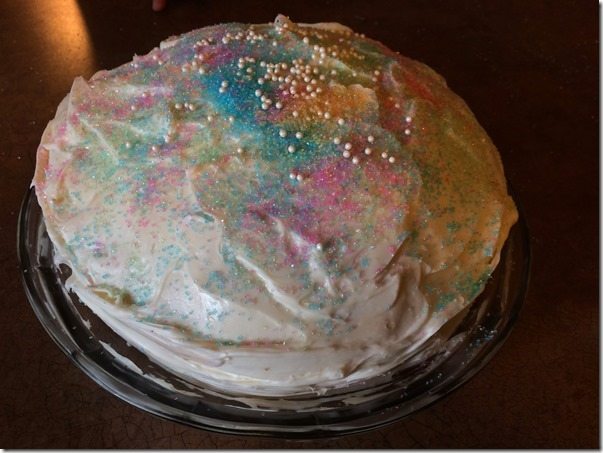 (And let the kids decorate it to death.)

I love my husband so much that I was willing to go the one and only place that still carries his favorite cake mix, Butter Pecan.

Yes. That place is Miley/Lohan/Reddit/Richman/Fieri-Mart.

I steeled my resolve, prayed blessings over my children, and managed to not have a wreck in the parking lot that is eternally a scene out of Independence Day right after the Aliens start shooting up the world.

I forced Noah to sit in the cart like an infant because I needed to minimize my distractions to make it through the American Ninja Warrior challenge to come. I could hear the commentators in my head.

Let’s see if Rachel can turn sideways quickly enough to avoid the lady in the electric shopping cart who can clearly walk but chooses not to do so. She did it – without even glaring when the Scooter tried to cut her off at the last minute!

Oh! She needs to duck! There are cans falling off the shelf due to an over-forceful stock boy.

Can she keep her three year old properly contained in the cart? No she cannot. But then again, who could?

It’s time for Rachel to scour every tub of frosting looking for cream cheese – You can see her wheels turning, wondering WHAT CRAZY PERSON CAME IN HERE AND BOUGHT EVERY SINGLE TUB OF EVERY SINGLE BRAND OF CREAM CHEESE FROSTING?!?!

We got our cake mix, found the last elusive tubs of Cream Cheese Frosting, I allowed the children to shop for birthday presents to give their Daddy (Legos – obviously), and we made it up to the row of registers with minimal point deductions.

The second round of competition began at picking the register least likely to turn on their blinky light for a price check…or worse.

We picked the last one in the row. Only one lady in line, and she only had four items.

What could go wrong??

That’s when I noticed that she was more blinding than The Star in the East.

I looked up to find the source of her light.

She was wearing a silver-sequined fedora – the kind you’d buy at Party City for a Tacky New Year’s Eve get-together. Her fishnet hose had such giant spaces between the fish nets that a school of Tuna could escape without breaking a scale. She was wearing peep toe shimmering heels, a cock-eyed black skirt with a separate silver sequined skirt hanging out from underneath, and a black business suit jacket…with more silver sequins poking out around the collar.

At first I thought she was also wearing a parole ankle monitor over her fishnets, but then I realized she just had the two biggest anklets ever created, but both still slightly smaller than ten out of twelve of the rings she was somehow managing to keep steady around her fingers.

When I got close enough to see what was going on, I realized she was singing. Softly at first, swaying back and forth minimally. The song swelled and her hips began gyrating.

The cashier just watched, with a level, bored, I’ve-seen-this-type-of-routine-every-day-I’ve-worked-here expression on her face.

I looked down and saw the item in question: a box of Candy Crush Gummy Snacks.

The song resumed, this time on the second verse.

You will need to adjust that price down to a dollar.

There was other bartering going on as well, one item in question being a neon pink sequined headband that had a clearance tag for fifty cents. Apparently the disappointment in the gummy snack price made her decide that this, too, was an outrage, so she threw the fuchsia headband onto the back of the conveyor belt.

I felt it was best, as she clearly had a silver sequin theme working for her.

“I need to talk to a manager or something. These gummies should be a dollar – they’ve always been a dollar and in the name of JESUS you ain’t gonna take my money!”

“I can’t adjust a price. Why don’t you pay for everything else you want, then you can go talk to a manager.”

She pulled from her pocket a large medicine bottle with the label ripped off. Through the amber plastic, I could see wadded up money and what looked like a couple of fake fingernails that had worked their way loose.

She sang under her breath as she pulled out the bills.

Apparently, Miss Sequins was also a magician, because as the clerk was bagging up her purchases, she found the pink headband in the bag.

Out came the pill box again, where she pulled out a single bill from betwixt the fingernails.

(At this point I was just glad I didn’t spot any actual fingers in that bottle.)

She danced off with her bag in one hand and the gummies in the other. I assumed those gummies would magically move to the bag and she’d be walking out in no time.

The cashier and I made eye contact. She shrugged her shoulders and said “The characters you get in here…”

I laughed sympathetically and prayed that my children wouldn’t do anything to send this poor soul over the edge.

While she rung up my purchases, my eyes wandered down a few registers where Sequins had found herself a manager. Her dance was even more animated and her song had the passion of Adele after being stood up for a date.

As I finished checking out, Sequins was stomping away, shimmering in the florescent Wal-Mart bulbs. She had her money and the manager was holding the gummies, watching her leave with fearful fascination.

So in the end, her song worked.

26 thoughts on “People of Wal-Mart: The Live Show.”