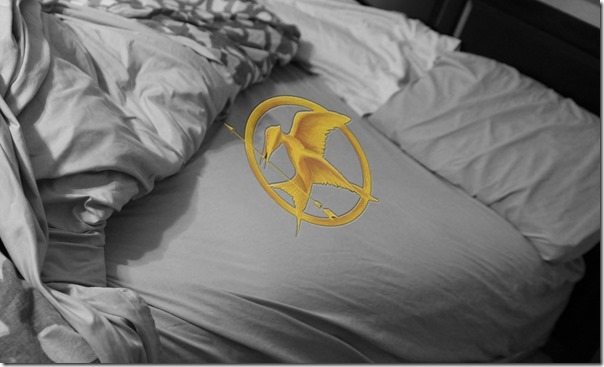 District 4: Male, four years old. Tactics include wetting the bed, loud footsteps, and the desire to play with other tributes at ungodly hours of the morning.

District 3: Female, three years old. Susceptible to bad dreams. Deep attachment to blanket. Thumb sucker (this is to your advantage for self-soothing, but against you in the event of a stuffy nose. Also, orthodontics will be a long term consequence.)

District 1: Female, one year old. Weapons of choice include six razor sharp teeth and pinching claws of death. Also equipped with howling shriek of doom. Uses dimples and adorableness to lure in her victims before attack.

Objective: Survival…or at least a minimal amount of sleep.

The games begin when the last light is off.

It’s go time. Roll over and turn out the light after falling asleep reading. As soon as you get comfortable, get ready for your first attack. Screaming three year old, middle bedroom. Nightmare. Run in before she wakes the baby in the room. Assure her that there are no bees (or bats) in her room. No, you will not read a story. No, she may not have a cookie. Counterattack with blanket and back-rubbing. Success. Tiptoe past the crib and climb back into bed. Roll over, get comfortable, and close your eyes.

12:30am: Four year old, running through the halls, needs to go potty. Kick male tribute and shove him out of bed. Warn him to avert his eyes downward lest he be blinded by the bathroom light. Whisper death threats to the four year old to keep him from waking his sisters in his proclamation of urination. Begrudgingly move back to your side of the bed when male tribute returns.

2:00: The scream of a Ring wraith pierces the night air (over the two sound machines, that is). Weaning baby, hungry and mad at her discovery that she’s in her crib, alone. Run. Snatch baby from crib and tiptoe back to full size bed. Rock screaming baby. Snuggle screaming baby. Pat the baby’s bottom. Whatever you do, do NOT nurse the screaming, weaning baby.

2:30-4:30: Undergo a series of co-sleeping attacks in various positions. (Her personal favorite is the “snow angels.”)

5:45: Four year old is up, demanding to watch TV. Engage immediately or he will recruit three year old for backup. DO NOT LET THIS HAPPEN. The games are over once they join forces. Keep them isolated at all costs. Kick male tribute. Kick him again. Remind him that this is his male heir and pull out the “I’ve been nursing all night” card. Male tribute joins four year old in twin bed and fends off several jumping attacks and endless questions.

6:30 Three year old climbs into bed to snuggle. Baby wakes up. Male tribute plops the squiggling fury of teeth and claws into bed with you. Your defeat is imminent. Try to tame rivals with kisses and lullabies.

7:15 The games are over. Get up and face the day with as much kindness as you can muster. With minimal sleep and lots of coffee. And no naps.

May the odds be ever in your favor.

8 thoughts on “The Slumber Games.”