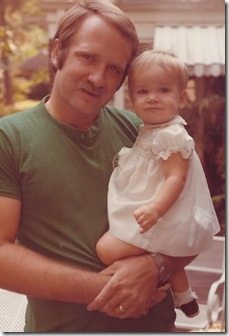 I’m not one to write a post for a particular day such as Easter, Thanksgiving, or Christmas, and especially not Father’s or Mother’s Day. I don’t even acknowledge it on Facebook or change my profile picture to include the appropriate parent.

I get my cynical anti-bandwagon genetic makeup from my father. He and I are very much alike – we don’t express our deep sentiments too freely and especially not in public.

So the fact that I’m about to actually write a Father’s Day post should be noted as monumental. And also should not be expected to have a sequel. Ever. But I was overcome this morning with the urge to tell one story.

I got engaged at 18, and we set our wedding date for six months later when I would be the seasoned age of 19.

Chris had not only asked my Dad’s permission to marry me (and endured two weeks of complete silence before he received an answer), but had also asked his permission to date me a year earlier. Or, as he worded to my dad, “May I date your daughter with the intention of marrying her?”

Upon that first questioning, after spending an afternoon mulling over his own opinion (we’re also both mullers), Dad came to me and said “I’m fine with it, but do you want to date him? Because if you don’t I’ll tell him no and then you won’t have to do it.”

I had known I was going to marry Chris for at least three months (way before Chris realized it), so I was agreeable to date the guy. But I was fairly surprised that my Dad was skippy about the whole thing – after all, he’d spent seventeen years frightening away any potential suitors with his intimidating silence and vague illusions to loaded weapons. I’d never dated anyone, and Chris, although fantastic in every way, was twenty-three years old. A freaking adult.

But this story happened after the second permission granted by my Dad, and after Chris and I got engaged.

Within a month, I started battling crippling anxiety. The kind that would make me have to leave work because I couldn’t quit crying. I realized that this anxiety was centralized around my upcoming wedding when I couldn’t sleep one night until I hid my veil in the closet.

Being an analytical person, I had to understand why, because I certainly wanted to marry Chris with all my heart. I began to realize that I was terrified of making this decision. Nineteen-year-old me loved Chris and desperately wanted to be with him. However, this was a decision – the decision above all decisions – that would affect the rest of my life. What made me qualified to make this decision for every other iteration of me that there would ever be? And most crucially, was I absolutely positive that this was God’s will for my life? Because above everything, that was what I needed to know – the assurance that I was entering into this because God wanted me to, and not just because I selfishly desired it. If I had that, then I knew the future would be okay.

It was October, my wedding was in March, and during the next two months my anxiety steadily increased. I went from being a nearly unemotional person to a constant mess. And when I wasn’t anxious, I was anxious about becoming anxious. I told my parents and Chris about my inner struggle. I prayed. I cried. I searched the scriptures for reassurance. But God was silent.

Chris, meanwhile, was terrified, although he didn’t tell me this for several years. On the outside he was supportive and steady, but he thought I was working toward breaking up with him.

My anxiety ruined the holidays for me, and nearly halted my wedding planning because thinking about it filled me with an unbearable fear. (Maybe that’s why I was still arranging my cake plan forty days beforehand.)

Finally, on the evening of New Year’s Day, I broke down with my parents. In between ugly, hiccuping sobs, I told them, “I just need to KNOW. I need to know that this is the right decision! I can’t keep going on like this.”

And my Dad, who had always been reserved with his words and certainly had never shown any glee about giving his only daughter to another man, said,

“Look at me. You know how long I’ve prayed about this and that I spent two weeks agonizing over it before I gave Chris permission to ask you. Do you really think that I would have said yes if I wasn’t absolutely convinced that it was God’s will for you?”

The burden disintegrated and I knew with my entire heart that he was right. This was the word that I had been looking for, assurance that I wasn’t even sure was possible, and now I was completely confident in my decision.

Although I still struggled with chemical anxiety until after the wedding, it had nothing to do with the upcoming marriage. My assurance never faltered again, and I was able to enter into marriage with an undoubting heart that was full of anticipation and joy. And my Dad seemed pretty happy, too. 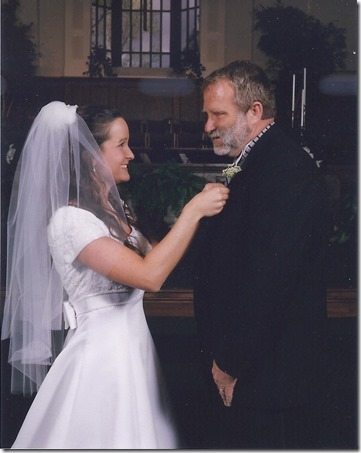 In the thirteen years that have followed, I have never, ever questioned my decision.

Because of the gravity my Dad took in helping me make that crucial choice, I now have a magnificent father for my own children – a father who takes on their upbringing with just as much passion and responsibility. 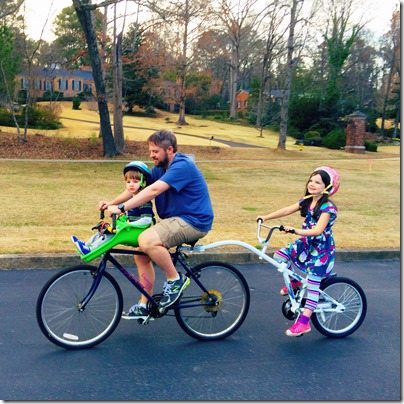 (And a good bit of whimsy.)

So for all of the times that my Dad scared the crap out of me about associating with unsavory men (geez – I got grounded one time just because I was with my older brother and he didn’t call before we went somewhere else, so there was no way I was going to hang out with anyone worse than a not-call-homer), I am eternally thankful.

It was never many words, but the ones he did say shaped the rest of my life.

19 thoughts on “The Gravity of Granting Permission.”