Sometimes a dose of lunacy is the best prescription.

At least that’s the principle upon which I’m basing this week’s decision-making.

I started feeling well on Saturday. Like, well well. More well than I’ve felt since November, when I began a string of bugs that included but was not limited to Laryngitis, a sinus infection, various other infections of a less savory nature, strep, a seven day stomach virus, and then ending the last two weeks with laryngitis again, which turned into a determined throat infection that kept me awake for the majority of four nights in a row with inexorable coughing. This was all while I was getting a colonoscopy and endoscopy, discovering that my immune system was compromised (duh), and still learning to live with dysautonomia.

All of that set the stage for an extreme intoxication of euphoria starting three days ago when I suddenly felt well, energetic, and even vivacious, and this magic is still coursing through my veins now.

It was a life-altering experience.

Around the same time, there began talks about Tuesday. Of amazing snowfalls in South Alabama, even more stunning snow in the Carolinas, but just sub-freezing, dry air in Birmingham.

My feelings of jubilation coupled with the possibility of yet again missing out on snow altered my brain chemistry and made me believe that a road trip was the only logical conclusion.

My first destination was Greenville, Alabama (the real Greenbow Alabama, for you Forrest Gump fans.)

Then the maps changed. Next destination: Orange Beach, Alabama. Yes, for a tiny second, the models were showing a FOOT OF SNOW on the beach.

Then the models realized how idiotic they looked and changed again.

I continued changing my plans with each new map, and on Monday morning, I decided the predictions were getting close enough to ask our weatherman, @Spann, for advice.

But I worded my question carefully, because during approaching southern snow events he gets fifty questions per minute from people wanting to know the exact amount of snowfall in their step-brother’s backyard at 4:35pm on Tuesday afternoon because they have a cookout planned that they’d really rather not postpone and from teenagers threatening his life and limb if they don’t get snowed out of school. 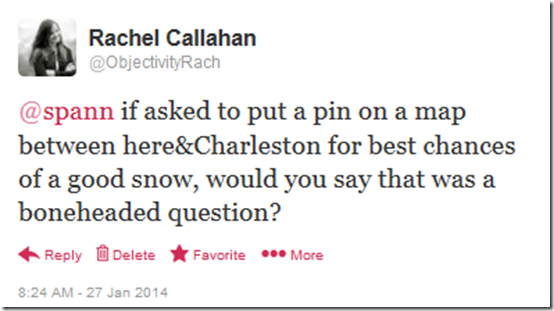 Thankfully, he kept his opinion of my obnoxious question to himself and presented me with a treasure map – one single map, which was a beautiful thing after my study of dozens of vastly varying maps in the past 48 hours. 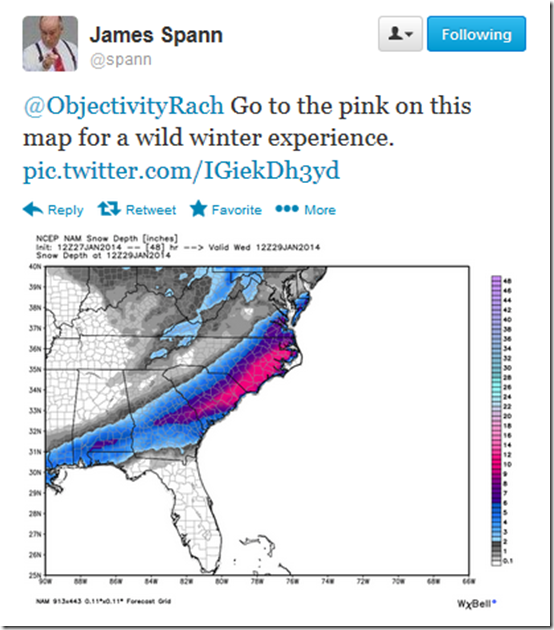 “Go to the pink on this map for a wild winter experience” was as mysterious and wondrous a clue as “The secret lies with Charlotte.”

Clearly I had to go.

For the children’s sake.

For the educational experience.

It’d be the best field trip all year long. And count for, like, 20 days worth of first grade science.

All for the children. Ahem.

But I knew Chris couldn’t go with me – after all, he has a busy job. But he was fully supportive of my dreams, and oddly unconcerned about hazards that could befall us. It’s like he knew it was my destiny.

So I was on my own. With my kids. Unconditionally COMPELLED to find this snowstorm and make it mine.

I went through a frenzy of plans – searching for hotels, rental houses, resorts, hostels, the location continuing to change with each new snow model – Charleston, then Columbia, then Eastern Georgia, then Santee, SC, then Eastern Georgia again. I followed that NAM model pink streak around like I was a starving dog on a Sarah McLachlan commercial and it was the most juicy bone ever concocted.

I finally had to find some logic within myself and therefore gave up the ultimate chase of the hot pink wild winter experience, because the predictions of ice first and widespread power outages were getting too intense, and that pink herring kept moving north on me.

(I even had one rental house owner agree to rent me their house, then call me back and say they couldn’t with a good conscience because they just knew it would lose power.)

So finally, my plans landed back in South Alabama near where I started. I rented an adorable little cottage on a lake for the kids and I, and we will have our snowy utopia.

But I must go.

And I must adventure.

There is no other choice.

To Lunacy – and beyond.