So the children and I set out early Tuesday morning to seek snow adventures.

We ran into some slightly dicey weather about halfway there, which is when I learned for the first time that you could actually use defrost to de-FROST your windshield.

I seriously had no idea.

And it wasn’t a quick realization, either. It was after my window was covered with sleet, and after I tried to use my wiper fluid which only furthered the ice smear. I decided I was going to have to find a gas station to buy an ice scraper (because of course I don’t own one,) then I had The Epiphany.

It IS called deFROST. I wonder if it could…surely not…well, it’s worth a try…

And miraculously, it worked!

But what we didn’t realize until we arrived and settled in is that we had actually run away from the snow, and what turned into one of our state’s most massive snow catastrophes.

Our destination, Eufaula Alabama, had been predicted to get a the brunt of the snow. We did get snow, but not until much later. What actually happened is that the snow band very suddenly shifted 100+ miles north, quite unexpectedly dousing Birmingham with snow and ice, causing schools to shut down and everyone to leave work at once to get their children and/or get home. And thousands (yes, thousands) of people ended up stranded in a massive, city-wide gridlock of wrecks and impassable roads.

Over four thousand children were stranded at their schools overnight – some still there now, with dedicated teachers who may or may not have had any sleep.

There were hundreds of wrecks. Hundreds of abandoned cars when people realized they couldn’t move – it was so desperate that they resorted to walking miles home in the still-falling snow.

It was horrifying and heartbreaking to see unfolding over Twitter and Facebook. And then, the exact same thing happened in Atlanta.

It’s complicated to explain why this happens to the south, but this article does a pretty good job. Basically, we have zero infrastructure to handle it, because it doesn’t happen enough to warrant it. James Spann, the weatherman I mentioned yesterday whom we all rely on, issued a humble and heart-wrenching apology. But I know how seriously he takes his service to our community (he literally saved thousands of our lives in 2011,) and am 100% confident that he got it as right as he could have considering the complete lack of historical data about predicted South Alabama snowfalls.

All day Tuesday I had a constant stream of texts from my friends that were separated from their kids, stranded on the roads, and/or trying to get home from work. Chris was stuck overnight in his office (and is still stuck tonight as well.)

Yet we were in South Alabama, where it was supposed to snow, but we were alternating between watching movies and playing in the rain. 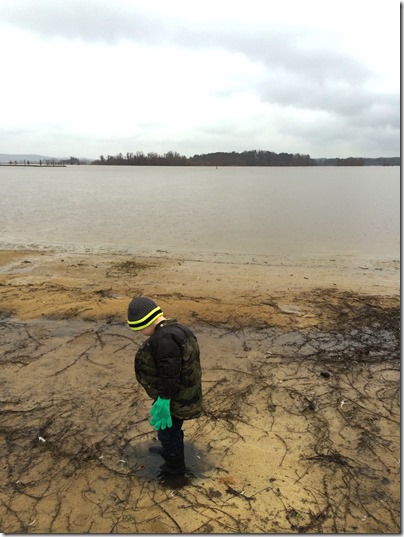 It was bizarre. It felt wrong. And all we could do was pray for our friends and neighbors – which we did a good bit.

After the kid’s bedtime, it started to snow here – giant, fat flakes, leaving us with the same amount of snow that Birmingham got, but with warmer temperatures and no mass hysteria.

I went to bed knowing that my friends were safe, my husband was safe, but that thousands were not.

I woke up just before sunrise to the snowy Utopia I’d so fervently sought for me and the kids, but it was bittersweet. 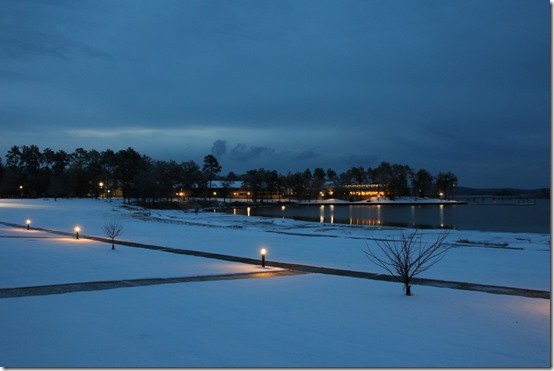 However, there was nothing we could do but pray for the people back home – we were quite firmly iced in three hours south, after all, so we set our hearts to enjoy the place that we were. 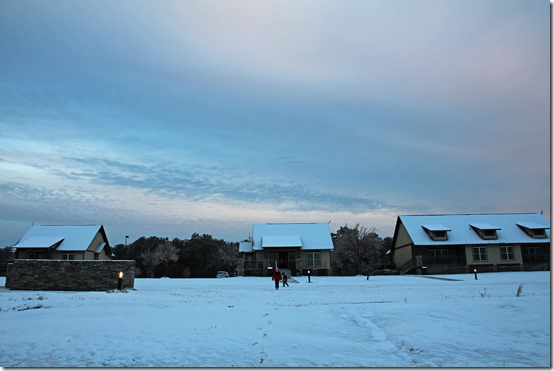 The sunrise was magical, 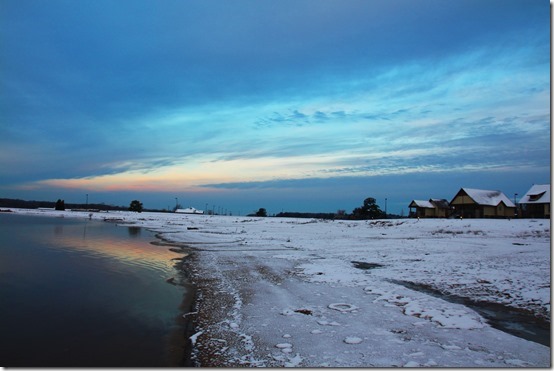 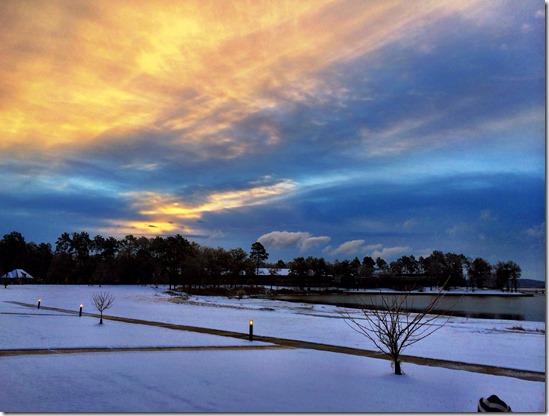 The kids were thrilled (I know the amount is laughable to Northern readers but it was enough to make us happy,) 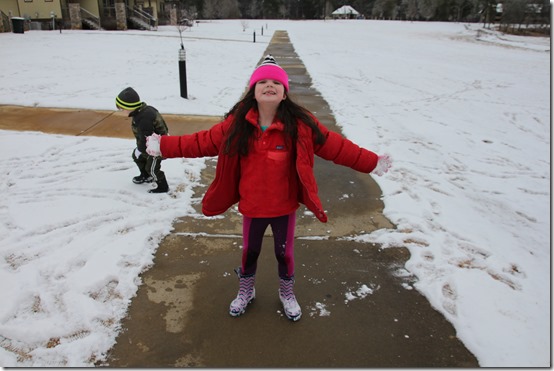 And the lake made things all the more entertaining. 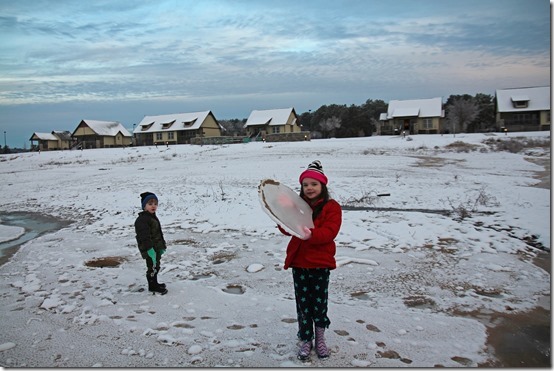 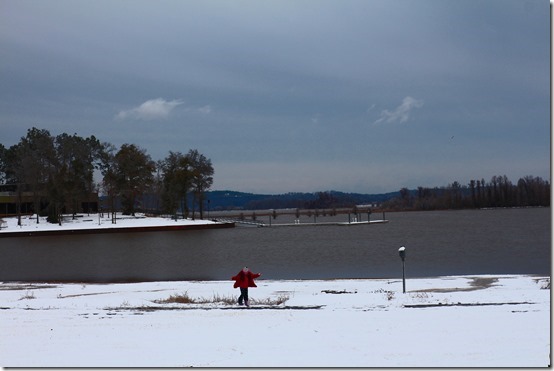 I forgot that I was three hours SOUTH of Birmingham several times until the Seagulls reminded me. 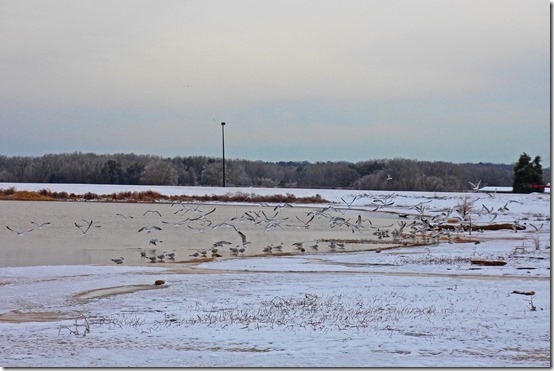 And of course these signs. 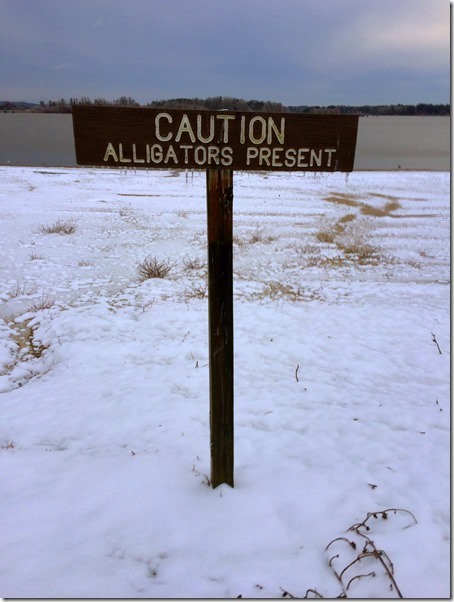 Noah enjoyed the snow until he decided he’d pick some up (in the terribly sub-par gloves I’d provided him.)

Apparently the stuff is cold. Who knew? 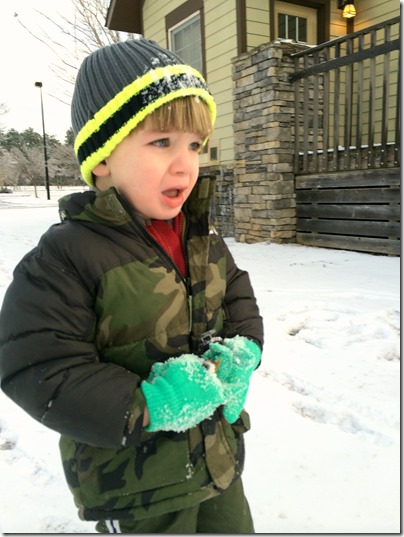 Ali was fortunate to make friends with the three kids staying two cottages over – they came up from Florida seeking snow. 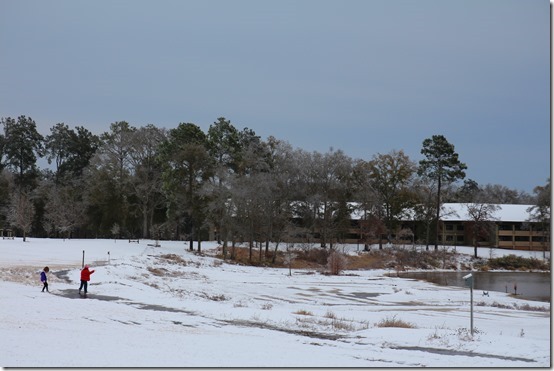 Ali even ventured into the lake. 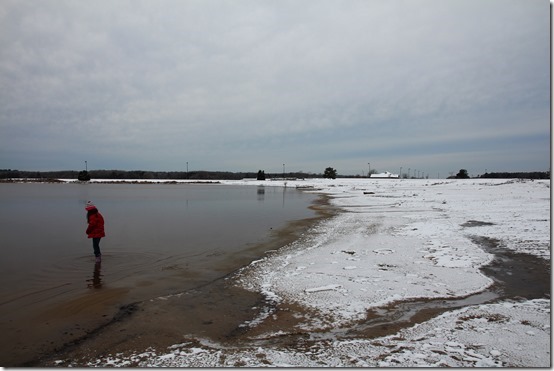 Noah preferred the driest snow he could find, after he watched an entire movie to recover from above snow panic. 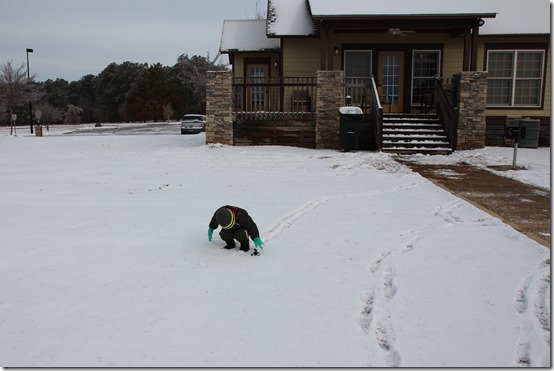 And, as is customary in southern snow, we frantically did everything that must be done.

We ate snow cream and made snow angels, 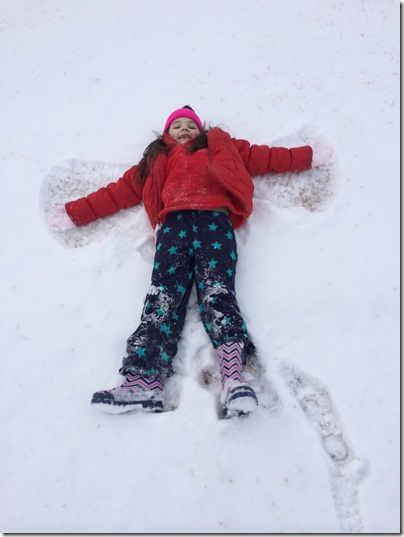 Attempted a snowman but found the snow to be too powdery, made snowballs, 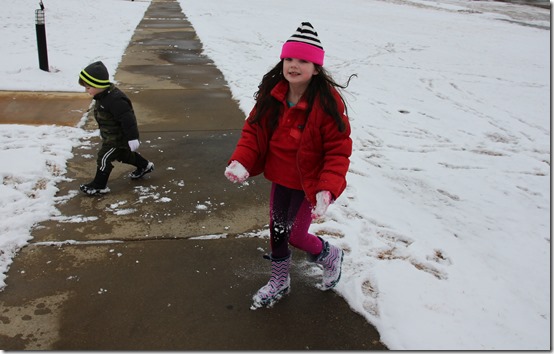 (Which is when I realized my daughter definitely throws like a girl,) 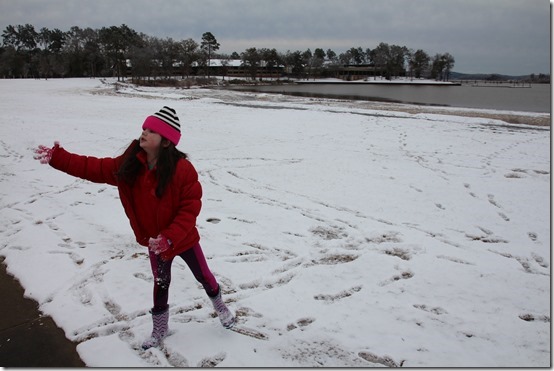 And wrote our names in the snow – with our feet, of course. 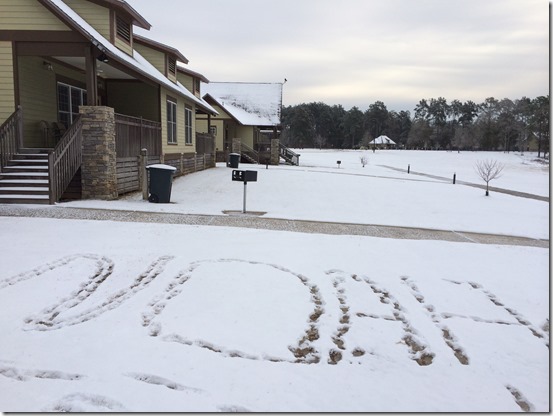 In short, our adventure has been successful. We have all three gotten everything we wanted out of our trip – beautiful views, 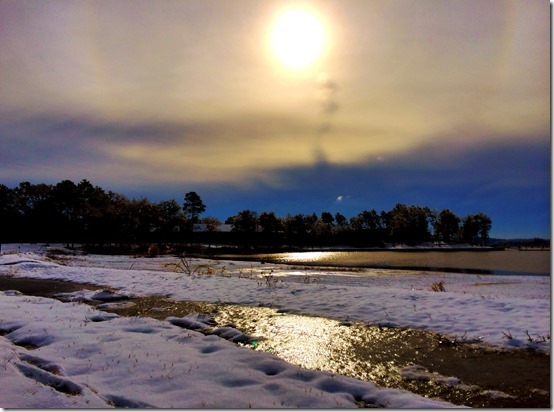 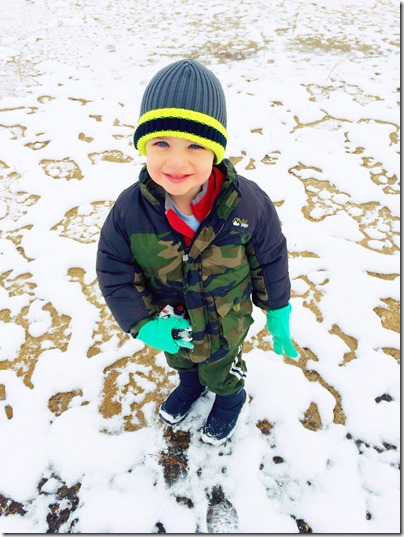 and plenty of playtime. 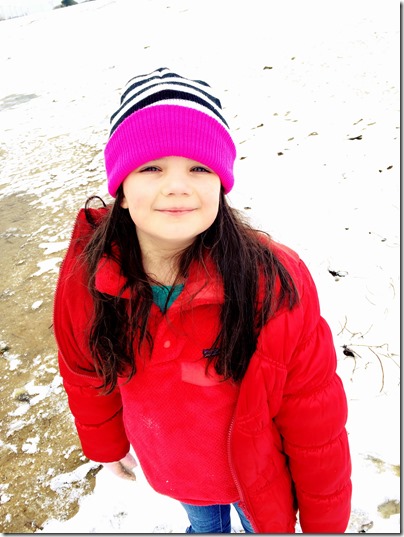 And some day when three hour’s worth of roads thaw (hopefully tomorrow), we’ll go home.

Please be praying for those still in transit or stranded in Birmingham and Atlanta.

14 thoughts on “The Snow Chasing Us.”