That’s what it takes to achieve the mailing out of Christmas Cards.

I am convinced that the twenty-nine step process of Christmas Card Creation is the single most trying test of adulthood.

(At least this week.)

And, being that I have a severe aversion to being late to any function, the fact that I cannot seem to ever finish Christmas cards in a timely fashion eats away at my soul like maggots on abandoned chocolate.

(No really. This one time, when I still worked in an office for a living, we had a bowl of small wrapped chocolates, and one day, I needed it really badly, and I retrieved a piece, and right before I bit into it, I saw that there were MAGGOTS IN IT. I investigated further, and yes. The whole bowl of chocolates was being consumed by creatures from the Nether Regions of Earth.)

(And then, there was this other time at work, when a beloved vendor brought us a gigantic box of intricately decorated cookies. And one of my co-workers was so excited to get into them that she knocked the entire box into my lap while the vendors were still on the other side of my cubicle glass talking to someone else. We feverishly attempted to clean them up and make them look like we hadn’t just soiled their gift before they glanced through the window in horror at our ungratefulness.)

(That story has nothing to do with Christmas cards but I felt I needed to document it because it is a shame that I didn’t blog back then.)

(Because if I did, you would have ADORED the story of the Infamous Warehouse/Accounting Oreo Battle of 2005.)

Let’s move on before I get fired from a job I haven’t had in seven years.

After much agony and planning and twenty-nine steps and staying up until 2am last night to get my Christmas Cards ordered only to realize this morning that I ordered the wrong size, then ordering supplemental envelopes so that they’d get here quicker so I could address them and be ready to go as soon as the cards came in only to find out that they’d take longer to ship than the cards themselves, I am nearly positive that I will be able to send Christmas Cards out before the 25th.

(That is, if I stay up until 2am every night hereafter addressing the envelopes which will, I’m sure, make for some creative mistakes and more blog posts crafted entirely out of run-on sentences.)

And, as I did last year, I ordered enough cards to exchange actual, IRL, physical mail with you. It was a delight to receive all of your cards and letters and get to see your families for a change, and I would be honored to have that privilege again. So, if we didn’t exchange addresses last year or if you’ve moved since then, please email me your address at graspingforobjectivity@gmail.com, and we’ll trade.

And in the meantime, while I’m anxiously waiting by the door for my Christmas Cards to deliver, here are a few of our family photos, shot by the legendary Brian T. Murphy, who took time off from his fantastically glamorous life of playing piano for The Lone Bellow in Carnegie Hall and on The Tonight Show to snap a few pictures of us.

We met at one of my favorite city vistas, but it was coated in a thick layer of fog, making it both great and challenging lighting for photos.

Somehow, despite the fact that he is completely camera-adverse, I managed to prep Noah appropriately to actually look at the camera and smile. 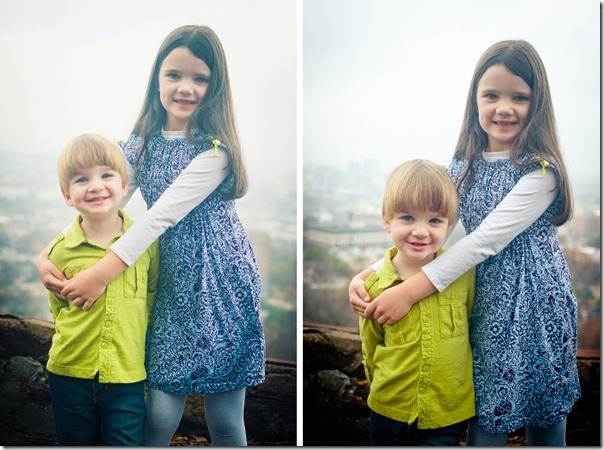 This might also have to do with a bribery offer of Sour Patch Kids, but I’m not ashamed of it. At all. 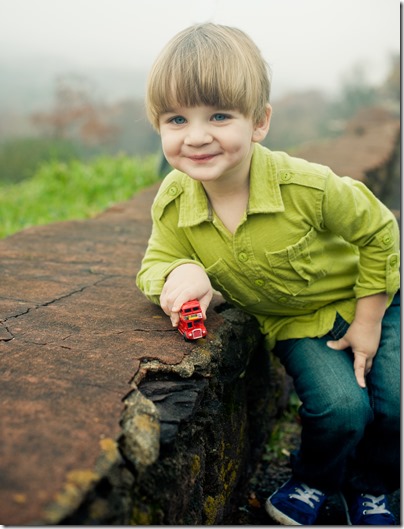 It was mushy out from an earlier rain, so Ali managed to muddy her knees before the first photo was snapped, the humidity made my carefully curled hair straighten instantaneously, and Noah seriously enjoyed pulling on my dress the entire time. So we’ll chalk all of that up to “real life photos.” 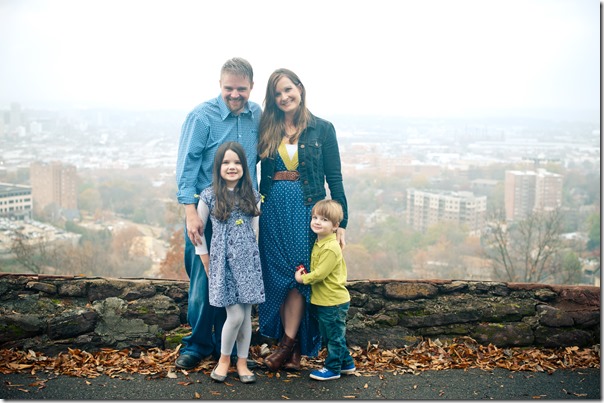 We let Noah bring only one car along (he usually has at least four in his hands at all times), and he chose “London Bus” (which formerly answered to the name “Duggle Decker Bus”) that an overseas blog reader sent him. So see? My kids love y’all as much as I do. 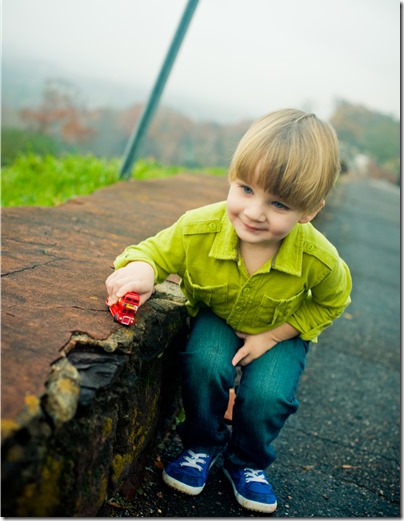 The wind miraculously left Ali’s hair alone, but turned Noah’s into a Boy Band swoop (which, if you’re from around here, is called “Bama Bangs.” So apparently he has a future in a University of Alabama Fraternity (let’s hope not.)) 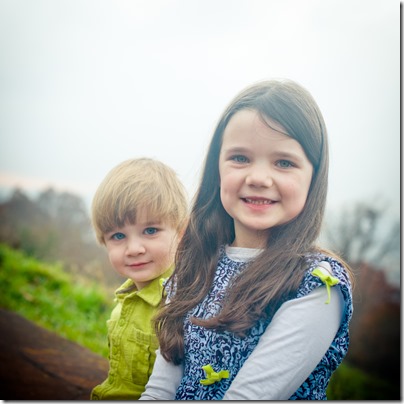 But he definitely has a future in charming behavior. 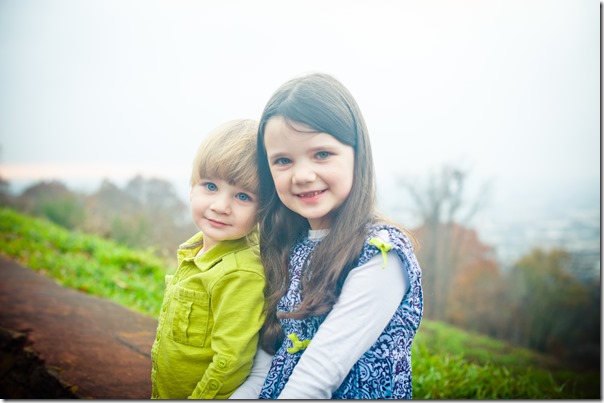 Ali and I got our picture taken together just to silence all of the people who say she looks just like me. What are they thinking?? 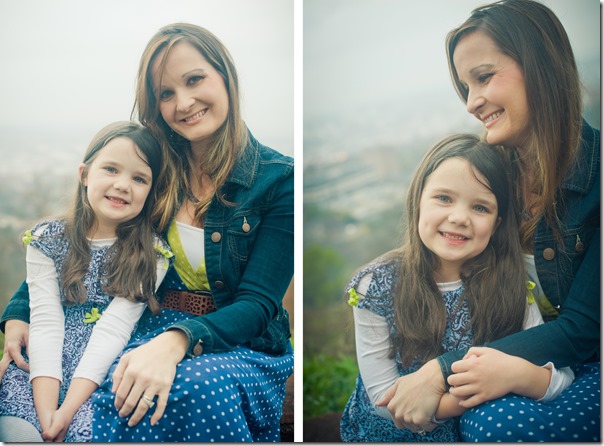 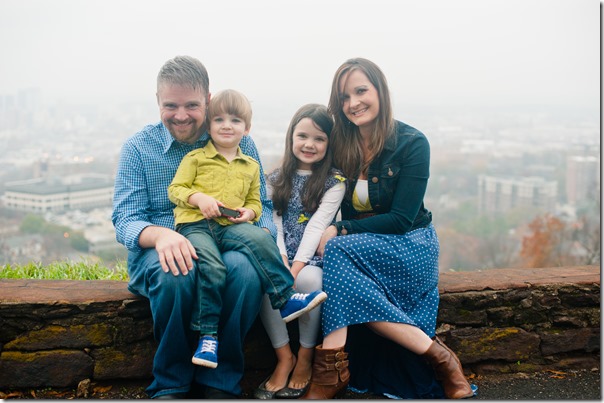 And even though we know that all our friends and family really only care about pictures of the children, Chris and I seized the opportunity to get a few photos of just us. 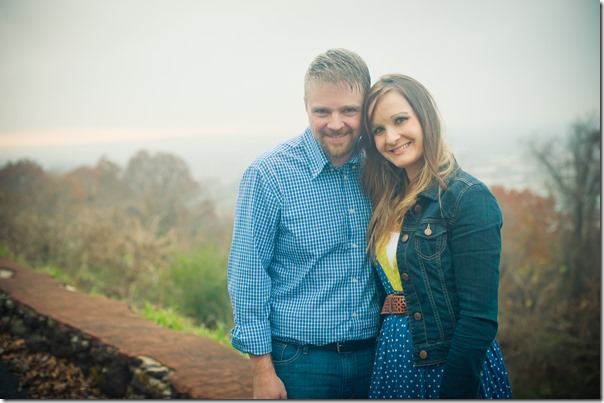 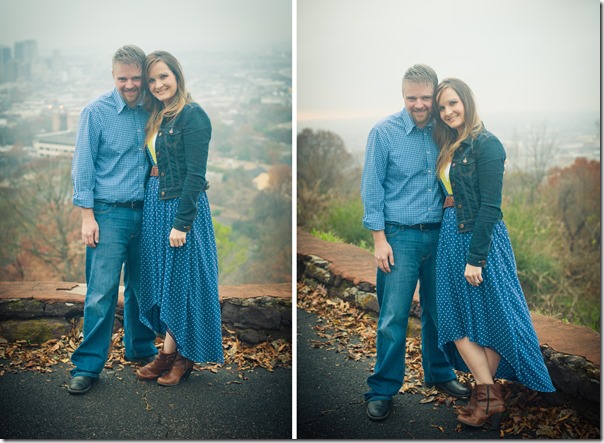 And better yet, no children fell off the side of a cliff during the capturing of the above photos. 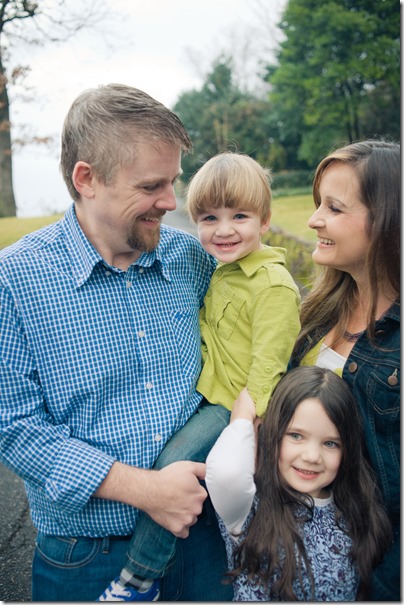 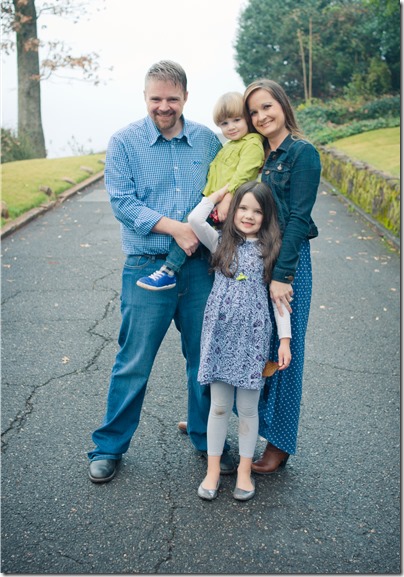 So. If I haven’t bored you enough with family photos and you’d still like to exchange actual Christmas cards, email me. It may be the very last card you get this year (especially if you’re not in the US), but it WILL get done.