Noah was lazily waking up from his nap, I was finishing a couple of blog posts, Ali was having quiet time, and Chris was out running.

It was a calm, lovely day.

Noah started moaning, so I went to retrieve him. He was crying by the time I arrived, which led to cuddling.

He explained between hiccups that his eye got poked. Upon further discussion, he told me that he poked his eye with his finger.

He calmed down fairly easily and we were snuggling happily. Ali heard us, so she walked across the hall. She stood, chatting in the doorway of his still-dark room, then looked up to the ceiling and said, “Oh – look!”

I looked up and saw the shadow of a flutter.

At first I feared my arch-nemesis, a flying roach. But that’s only because the object moved too quickly out of my peripheral vision for me to realize its size or shape.

I adjusted my vision, looked again, and wished it were a flying roach.

It had at least a twelve-inch wingspan.

His swoop descended and circled, ever closer to the level of my head.

I shoved Noah into my chest and let out sounds that had previously only been uttered by a hyena immediately before being eaten by a lion. I ducked and ran-fell out of the room, bashing Noah into the footboard as we careened into the hallway.

Both Noah and Ali began crying as I slammed his door, flung open the linen closet, and stuffed an undeserving beach towel under the door.

I uncalmly tried to explain between hyperventilating.

Wheezing and shaking, I somehow managed to transfer myself and my family down the stairs without passing out, falling, or throwing up, thanks in full to the fact that I am on pulse-regulating heart medication.

We all silently walked to the kitchen and stood at the top of the basement stairs, waiting for Chris to get home.

After a few minutes, he rounded the corner, beaming and energetic from a beautiful Autumn run.

I studied Chris’ face as he processed this revelation and mentally changed gears from the evening he thought existed.

I’m not sure I said anything, perhaps muted forever by the traumatization.

“Well, okay then. Give me a few minutes.”

He descended back into the basement where he Googled “how to catch a bat” and collected his supplies: an ice chest, old towel, and work gloves, then came upstairs to select the tallest piece of Rubbermaid from my kitchen.

He went upstairs and peeked stealthily into Noah’s room. Then came back and said,

“Okay. He’s asleep, hanging from the ceiling. Is that where he was when y’all saw him?”

I nearly choked at the thought.

How nice THAT would have been.

“Uh, NO. He was circling the room, swarmed our heads, and barely let us escape.”

Then he went to the bathroom. It’s always best to thoroughly empty oneself before facing a flying rodent, he later explained. I can’t say that I blamed him, and wished I’d been afforded the same opportunity.

I tried to calm myself, sitting on the couch with the Starbucks Chris had brought me from his run, telling myself that everything was okay. SURELY the bat hadn’t been present for Noah’s entire nap. And if he had, then CERTAINLY he hadn’t touched Noah.

Which is the exact moment that Noah decided to offhandedly mention,

Stupid heart pills. Try as I might they wouldn’t let me die.

I took a Grand-Canyon-deep breath and said,

“But you said it was your finger?”

“Baby. Don’t lie to Mommy. Tell me the truth. How did your eye get poked?”

I swallowed a liter of bile and nearly tore a hole in the couch with my nails, willing my brain to forget what it had just heard.

Chris finally returned, seemingly fully in tact, cooler in hand, and perhaps a bit more testosteroney than when he left.

“I have been successful in my mission. I have saved the family. Want to see it?”

He led us all into the bathroom and shut the door.

With much pride, he sat down his cage and removed his manly gloves. 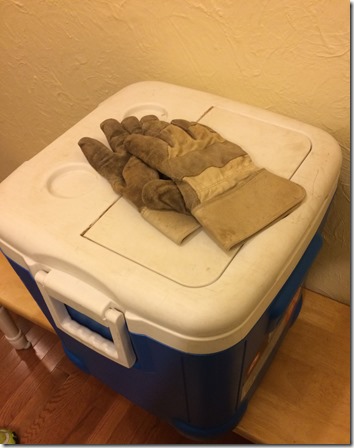 He then opened the cage. 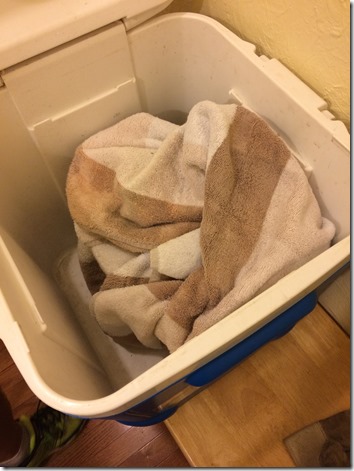 And removed the covering. 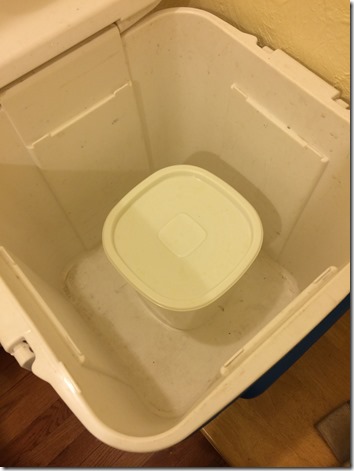 He checked the lid’s seal twice, then exhumed the container from the cage, and set it on the bathroom counter. 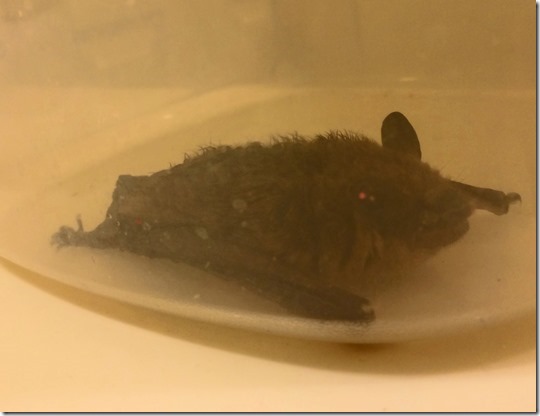 The depraved villain straight from the warmest Port-A-Potty of Hell bared his yellowed fangs straight at me. The claws on the tips of his wings were more disgusting than a toddler’s fingernails after playing in his own feces, and his back fur was wet, as if he’d recently peed himself. 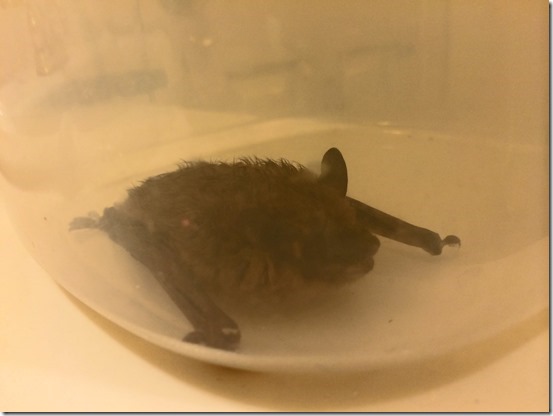 And my eyes had not deceived me. He was larger than God should allow any bat to be. 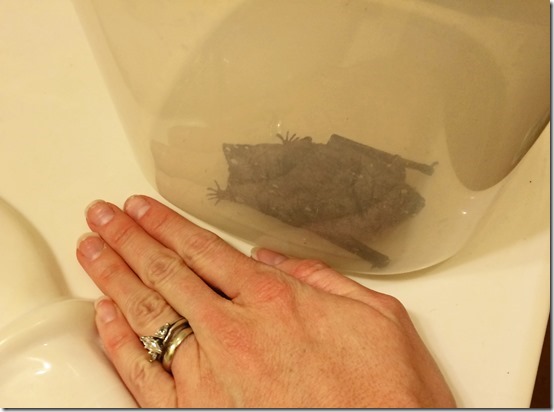 Chris, not yet having heard Noah’s story change, was insanely proud of himself. He went in search of the appropriate prop for his instagrammed victory over the nefarious villain that had entered his domain and threatened his family. 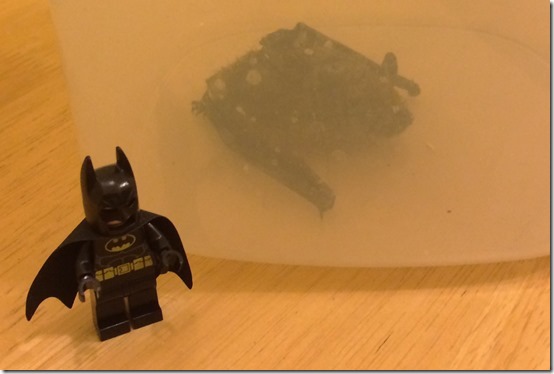 I would have been more impressed if he’d had to face the bat mid-flight like myself, rather than just covering him with the bowl and plucking him off the ceiling. But if that had transpired, I seriously doubt we would have had our prisoner.

And after all, Chris was fantastic.

He took control of all the things my trauma still disallowed me to do, such as sticking the children in front of a movie, giving them leftovers for dinner, and eventually putting them both to bed in Ali’s room (there was no way anyone would be sleeping in Noah’s room that night) while I frantically left a message for Rid-A-Critter to come check for more, and went through Noah’s story with Chris and all of the what ifs that had been ping-ponging in my mind.

I reassured myself with a thorough inspection of Noah’s face and head, and found nothing.

Then I deassured myself by reading on the CDC website that bat bites are undetectable.

It was at that point that I lost at least two more years off the backside of my life.

I emailed my Pediatrician to see what she thought I should do.

I went to the Jefferson County Department of Health’s website, trying to find out who would test a bat for rabies. The first sentence on the page read,

“Years ago, Jefferson County, Alabama was unofficially know as the ‘rabies capital of the world’…”

I mean. Could they not have said “Rabies Capital of America”? Surely there was more Rabies in The Congo than in central Alabama. Right??

They had a phone number listed, but it was Sunday night and our county isn’t exactly known for its efficiencies.

But I called it anyway.

“If you have a public health emergency, press three.”

What the heck. I’ll try it.

I told my story to the person on call. She took it very seriously and said she’d have someone call me.

I told my story to a nurse at Children’s Hospital. She sounded grave and said she’d have someone call me.

I told my story to Rabies Control. They told me to refrigerate the bat (not freeze, please), and bring him to the Jefferson County Department of Health at 7:45 in the morning where we were to ask for J.C. Andrews. They would overnight the bat to the lab and we would find out the results on Tuesday or Wednesday.

These are the moments that one can truly appreciate having a basement refrigerator that houses nothing but canned drinks and the occasional possibly rabid bat. 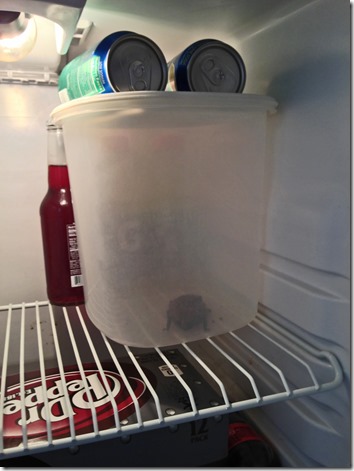 Not that I’ll ever drink Sprite again. But at least I don’t have to burn my Greek Dressing and cheese spread.

Clearly, sleep did not come for me that night. Or if it did, my dreams were identical to my waking thoughts – sounds of bat wings fluttering, asphyxiating on guano, giant fangs tearing into my children…

I was not in my best mood the next day.

Chris and the bat set off early to go find the elusive J.C. Andrews. On the way, my parents called him and said that they wanted to drive the bat to Montgomery and hand-deliver it to the lab to skip the shipping time to make sure Noah didn’t have to start the rabies vaccine unless absolutely necessary.

(They lived through those days of Jefferson County being the Rabies Capital of the World and can tell horror stories of 50 rounds of rabies shots in the stomach and people that were never quite right after receiving them.)

After receiving the requisite paperwork with multiple colored carbons from the DoH that is required to deliver a freshly chilled, potentially diseased flying monster to a secret laboratory, Chris met up with my parents at an undisclosed location to transfer the dangerous biohazard.

Around nine that morning, I got a call from an extremely accusatory and suspiciously voiced woman at the Jefferson County Department of Health.

“Ma’am. Have you taken your son in to the doctor yet?”

“No – I’ve emailed with my Pediatrician, and we are going to wait on the results of the test before we start treatment.”

“You – you haven’t taken him IN yet? I’m gonna need your address.”

I dutifully surrendered my rights and my address.

“Now. Ma’am. WHY AGAIN haven’t you seen a doctor?”

“I EMAILED my doctor. We HAVE talked. I WILL take him in tomorrow depending on the bat’s test results. We do NOT want to vaccinate him UNLESS it is necessary.”

“Oh. Yes. Of course. We don’t want to put him through that unless he needs it.”

We stumbled through the school day, waiting desperately for the lab to call us and Rid-A-Critter to dispatch.

When the Batman did arrive, he climbed into the attic, and the first thing I heard was an impressed whistle.

Two minutes and he was back down the stairs.

He laid out the plan of cleaning up the guano and sealing up the holes and giving the bats a one-way exit (did you know bats are a protected species? Because they are) – so that they would have to find a new neighbor to tenantize.

A little while later the State Lab did call and after a ridiculously long introduction and buildup, confirmed that there was no evidence of rabies in our bat, God Rest His Soul.

The next morning, my Dad returned the ice chest (but thankfully not the Rubbermaid.) Noah ran up to tell him the whole story.

“Dere wus a bat in my woom! A BIIIIIIIG bat! And we all scweemed, and den wan away…”

My Dad asked, “Who all screamed?”

And that about sums it up.

94 thoughts on “The Home Invasion.”