Despite the fact that I would prefer for it to stay out of my house, I do love nature – especially in the fall.

And although it seemed to start later than usual, Autumn has been lovely here. The weather has been mild and sunny, and the extraordinarily bright leaf colors seem to have come in two distinct waves, offering a magical encore as soon as I thought they were falling.

As such, we’ve been trying to appreciate the outdoors as much as possible, including exploring some new places.

On my birthday, which was before the leaves changed, I walked at Red Mountain Park with my kids and a friend. Although I’ve taken countless hikes on many different RMP trails, there are still several I hadn’t checked out, including the trail to the SkyHy Treehouse.

On our journey, we found ruins, some of which looked more like Mexican ruins than mining leftovers in Birmingham, leading me to perhaps pretend that I was on an exotic birthday exploration rather than twenty minutes from home. 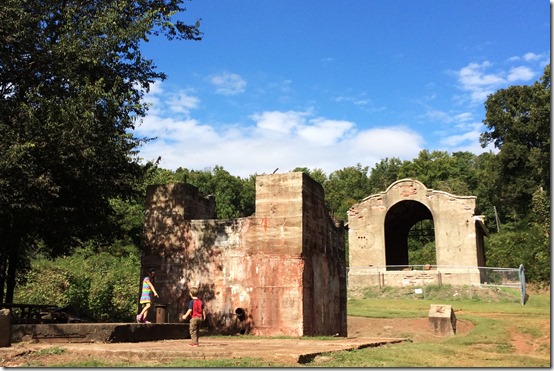 .
I had no idea what to expect when we found the Treehouse, but upon first seeing it, I just knew that Ali would NOT be going over that bridge. 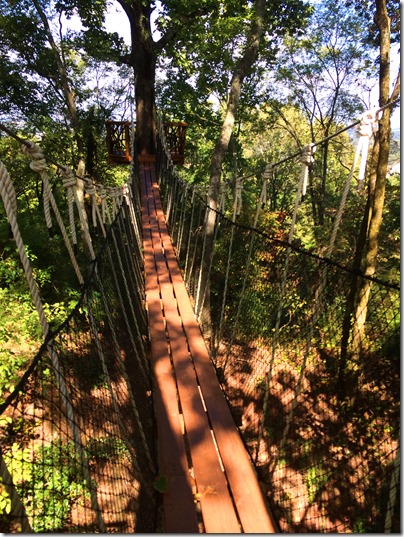 It was much higher up than it appears, wiggled a good deal, and was extraordinarily narrow.

But she was miraculously brave, and with the help of my friend Ashley, excitedly made it to the other side. 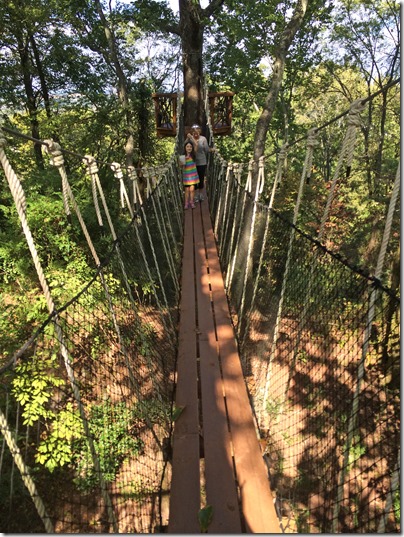 …Where she promptly had to sit down and document her journey thus far. The girl is nothing if not a journalist. 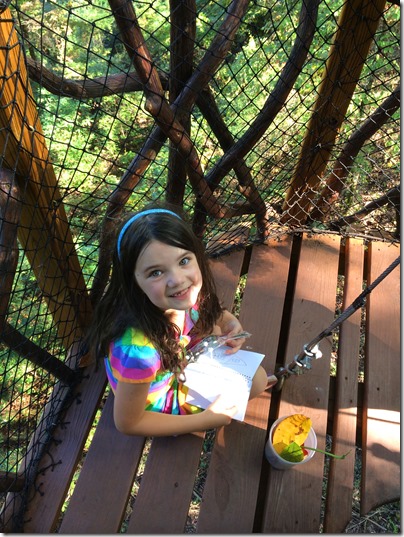 While she made notes, I tried to ferociously hold onto Noah while taking photos of the exciting new view. 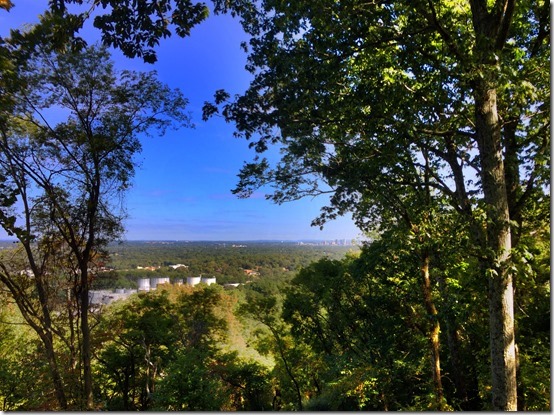 And yes – that is Birmingham – seemingly in the middle of a forest. Viewing from above can certainly offer a new perspective. 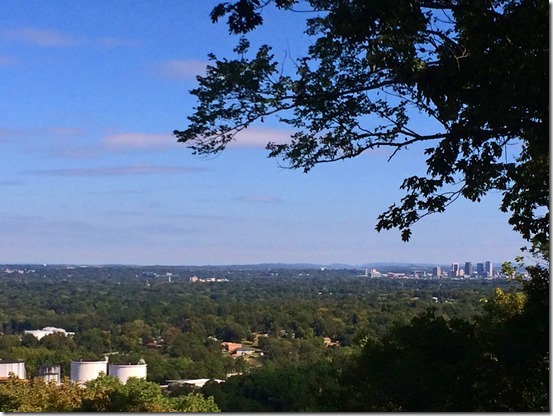 For our next walk, we visited the little known Irondale Furnace Trail. It’s actually in Mountain Brook (On Stone River Road, for those who want to find it), and about 1 1/3 miles long. It’s fairly flat, which is something that’s hard to come by around here, and is also an important feature to cut down on the Toddler Whine Factor.

(The TWF was extremely high for the above Red Mountain Hike, but still worth it.)

The Irondale Furnace Trail runs by a creek on one side and a forested hill on the other. And right now, it’s stunning. 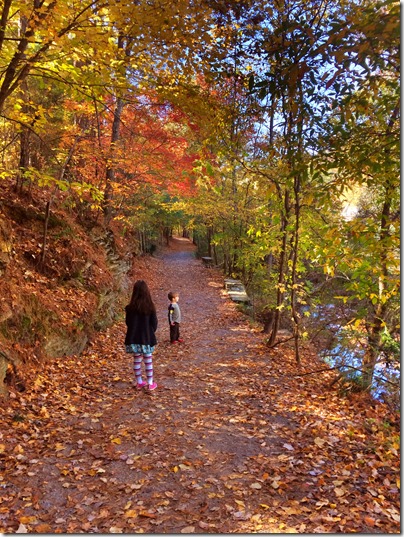 About halfway down the trail, you’ll find the ruins of the Irondale Furnace, which increases the educational value of this walk from P.E. (exercise) and Science (leaves) to PE, Science, and Alabama History. Homeschoolers everywhere should be flocking to this trail post-haste. 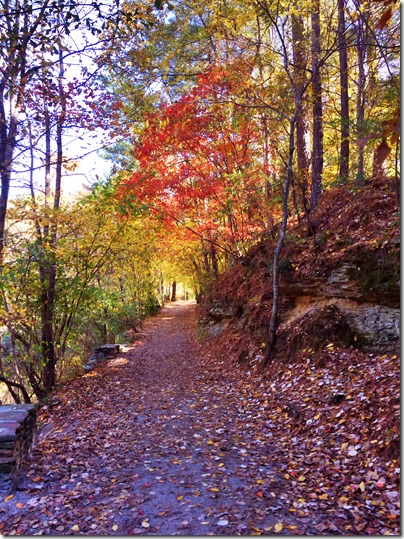 Across from the ruins (which, despite their educational value I did not photograph,) there’s a clearing where you can walk down to the creek, and perhaps throw sticks for someone else’s dog. Or your dog, if you’re a better person than I. 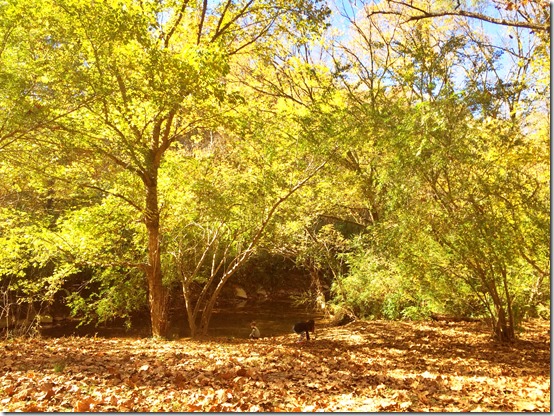 The trail empties out into someone’s driveway on Old Leeds Road, and has a final hoorah of having rocks on which to sit and contemplate one’s journey thus far. 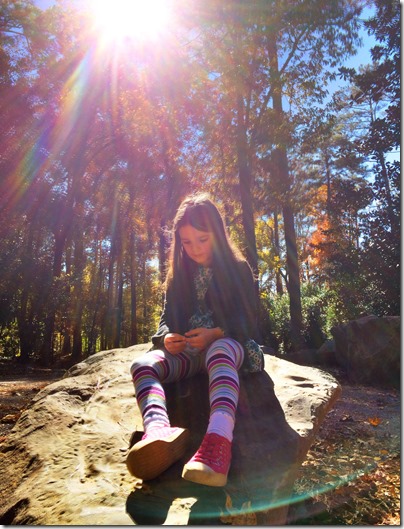 Good luck prying your kids off of those rocks for the walk back. 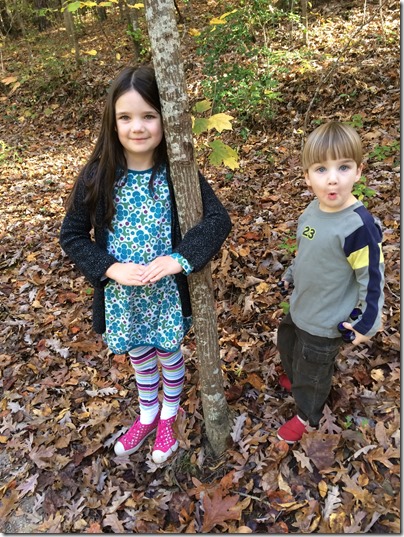 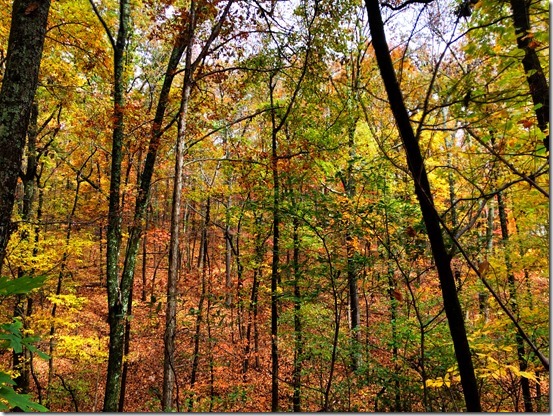 Ruffner Mountain is a shockingly big nature preserve in between Birmingham and Irondale – over 1,000 acres of beauty right in the middle of the city. 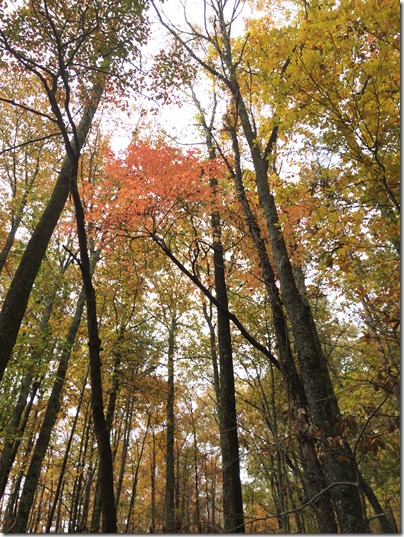 There are several overlooks of quarries and city, all fantastically stunning right now. 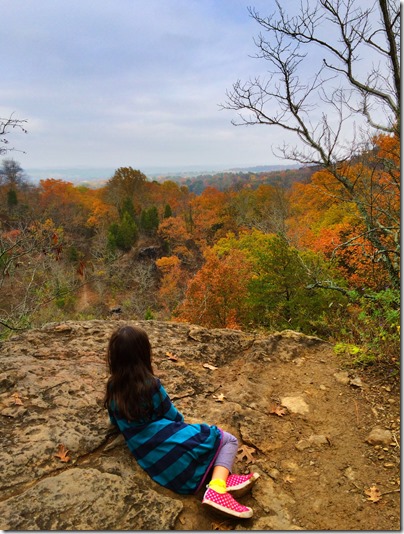 We took the 1.5 mile hike to the Birmingham Overlook, and since Chris was with us, he brought along the jogging stroller in case we had a high occurrence of Toddler Whine Factor.

I do not recommend this strategy.

The trails were narrow and winding, 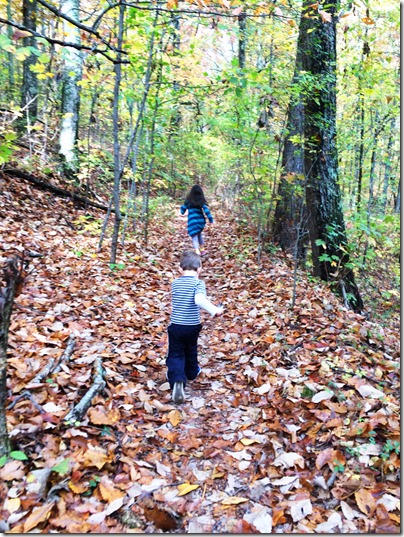 And had quite a number of natural and unnatural stairs involved, none of which were friendly to the jogging stroller. 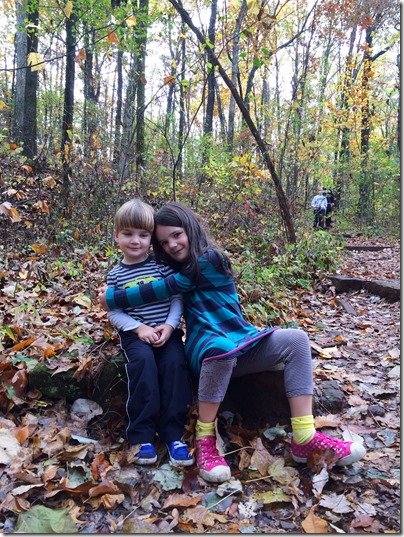 Not to say that the TWF didn’t crop up, but Noah refused to ride because the trail was too bumpy, so the stroller’s impact to our walk was a net 50% reduction to the parental ability to help, stop, and guide children.

(After passing the sixth person that said “Wow – a jogging stroller? Never seen that out here before”, Chris admitted to the error of his attemptingly-helpful ways.)

But we finally made it to the top overlook, which was thoroughly worth the uphill walk, despite the fog enshrouding Birmingham that day. 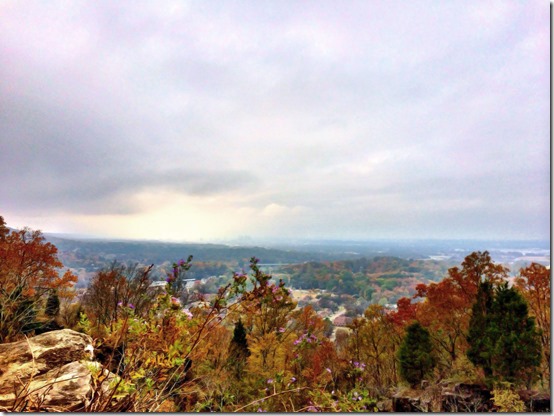 If it had been a clear day, the view would have been exactly opposite of the one from the SkyHy Treehouse at Red Mountain, looking at Birmingham’s East side instead of its West.

(As opposed to our normal sunset view, which looks at its South side. But Birmingham really doesn’t have a bad angle.) 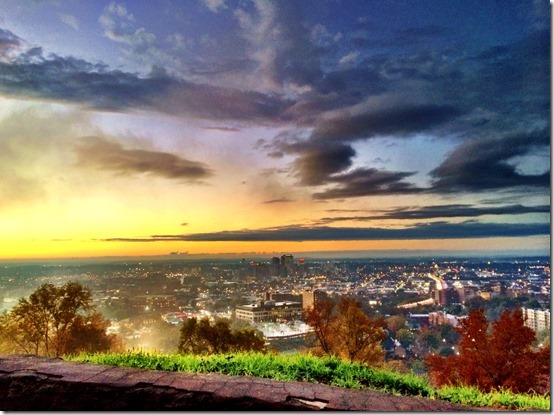 After our walk, we drove a few blocks over and ate at The Irondale Café, which was a great place for the children to watch trains, and for me to watch graffiti. 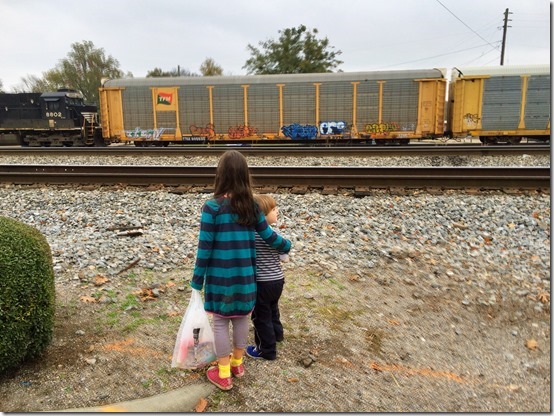 Also – who knew they had Chuggington Bushes?? You can’t find those every day. 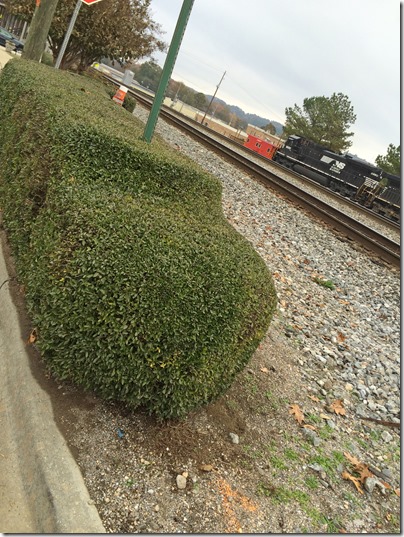 In the last couple of days I’ve noticed even more stunning colors than before – perhaps a third wave of color. So it’s not too late – at least around here. Get out there and explore, people. 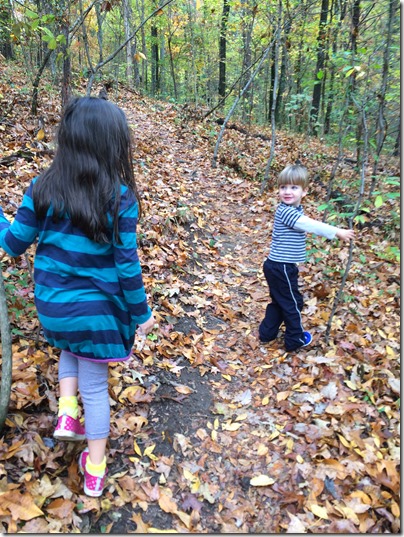 After all, it’s a kid-approved activity. Most of the time. 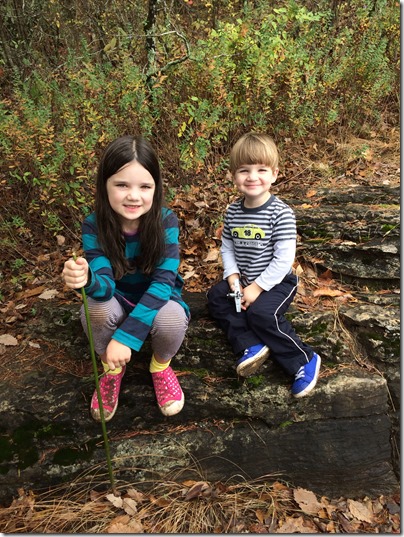