I got sideswiped by The Knight Bus yesterday.

And really, it had to happen to someone. Have you seen its ludicrous speeds and maneuvers?

No, I guess you haven’t, since it’s invisible to Muggles, and I’m pretty sure that Hermione and Harry aren’t regular blog readers.

(But Luna Lovegood totally is.)

So. I was coming around a blind curve in an exclusive, older neighborhood where I am positive that many witches (if not wizards) reside.

Yes, there was a brand new curb alongside the road, and yes, the sharp edge of that new curb even had a bright orange cone to help one not be able to miss it.

That brand new curb might have been exactly what caused The Knight Bus to swerve at just the wrong time and sideswipe my tires, causing a rather impressive explosion.

And if you look closely enough, you can see Knight Bus evidence. 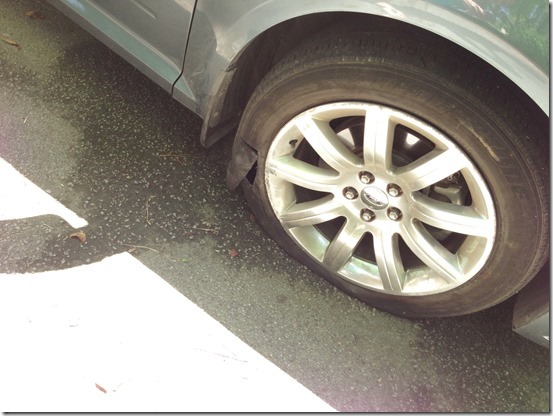 What? You can’t see it? Perhaps if I adjust the saturation a bit and compare it to the perpetrator… 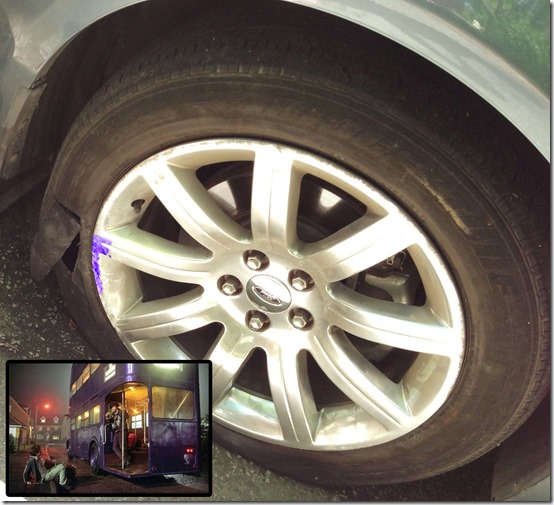 I’m assuming the only company that would insure The Knight Bus would be Lloyd’s of London, so I’m on hold with them now.

But while I listen to British hold music (Florence and the Machine is so bizarre), I’ll tell you the rest of the story.

It was mid-morning. The kids and I were in our swimsuits with clothes over the top (which takes approximately ten times as long as either clothes or swimsuits as standalones), lunches packed, library books gathered, and summer reading logs fully filled out – so basically the triple-trifecta of Motherhood Accomplishment.

I was driving along in the safest female manner imaginable when I went around a rather sharp curve on a road that was receiving fresh sidewalks. All of a sudden, we felt a huge bump and explosion, and the right side of the car shifted down several inches.

Of course this two-lane, blind-curved road didn’t have a nice shoulder for us to rest upon (just those rudely sharp curbs), so I pulled into the next multi-million dollar house’s driveway, thereby blocking their Maserati from descending into The World of Mundanes.

(Lucky for them, The Knight Bus was in the area if they needed a ride.)

I pulled out my insurance card and called State Farm, straining to hear the automated “helper” over the backseat’s repeated inquisitions as to why we weren’t at the library.

I finally got a human. I read her my 256-key encryption of a policy number.

“My system shows that you do not have Roadside Assistance.”

“My card clearly shows an ‘H’, and when I turn it over, ‘H’ notates ‘Emergency Roadside Assistance.’”

“Well I’m going to have to charge you, and you can call your local agent to get it refunded.”

I meticulously screamed my credit card number over the growing cacophony of the backseat.

“MOMMY I WANNA GET UNBUCKLED!!!” <raspberries hitting the back of my neck>

“I’M SOOOOOOO BORED!! WHEN ARE WE GOING TO THE LIBRARY?? AND ARE WE STILL GOING SWIMMING???”

“Okay ma’am, I will now need your complete billing address.”

I envisioned stabbing a call center clerk somewhere with a dull pencil as I slowly gave her the address that I am positive she already had on her screen.

…Then with a ballpoint pen when I had to re-spell my last name and repeat my phone number.

She thanked me, calling me by the wrong name, and said that there would be someone out to change my tire shortly.

(Yes, my father taught me how to change a tire when I was sixteen. No, I didn’t want to attempt it at thirty-one.)

While I waited, I decided to risk getting out of the car to check out the damage.

Which is when I realized that both of my tires were blown, and that State Farm sending out a spare-tire-putter-oner was not going to add value to my current state.

I returned to the Monkey House that was the inside of my car, waited until my spotty cell phone service returned, and called State Farm again, this time reaching Tristan. I explained my situation, and he agreed that I would need a tow truck.

“Okay. Since I cancelled the prior service call, the computer has automatically refunded the payment that you made earlier. But I need to charge you the exact same amount for the tow truck. So can you please tell me your credit card number and billing address?”

It was at this moment that I attained a steering wheel imprint on my forehead.

Chris left the office to come get us.

The tow truck was on the way.

I had made the unfortunate decision of unbuckling Noah so that he could see the flashing lights of the police car that stopped to check on us.

Fortunately, we had Library books, and before he strew them throughout the car, he spent a beautifully quiet thirty seconds reading what he informed me was “Don’t Let the Bus Ride the Pigeon.” 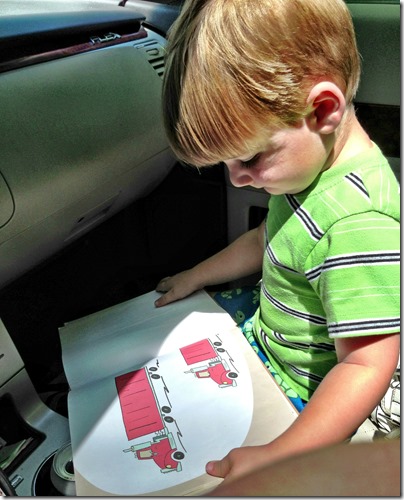 After an hour and fifteen minutes of car prison, the tow truck arrived, and in a way shorter timespan than I desired, had the victim ready to go. 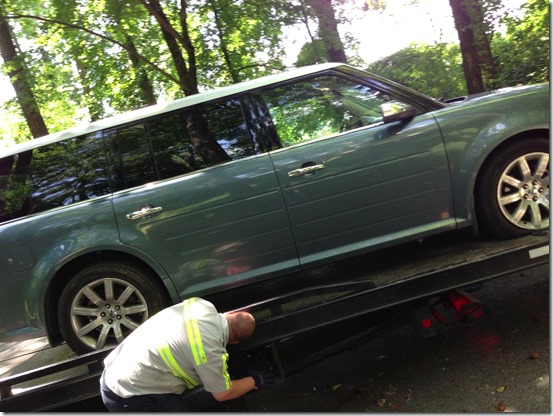 …as I stood on the sidewalk, holding my shoeless two-year-old (while wondering where he hid them), squeezing the hand of my six-year-old, fully aware that my phone said “no service”, and hoping my husband would arrive soon.

Mister Tow programmed the destination into his TomTom, and I knew he would be leaving.

But, like all superheroes, Chris arrived just in time.

(At which point Mister Tow hopped out and told me, “I wasn’t going to leave you here alone, ma’am.”)

(Would’ve been nice to know when I was waiting to be left alone, but hey, chivalry isn’t dead – just uncommunicative.)

Chris took us home and helped me settle down from my emotionally-harrowing adventures, then my Dad called. He answered with,

“Were you texting while driving?”

“No! My phone was in my purse on the other side of the car. I can run over a curb all by myself, thank you very much!”

(I would’ve told him the truth about The Knight Bus, but I was in no state of mind to explain all seven books.)

But if it wasn’t The Knight Bus, Ali’s theory is pretty solid, too. As we waited for our tow, she had investigated the driveway we were blocking.

“Hey Mom – do you think that mailbox could have anything to do with our tires exploding?” 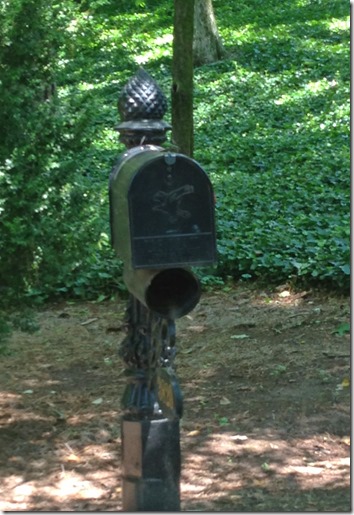 “Well look at it – it has a big shooter below the box.”

14 thoughts on “Theories Behind Tire Explosions.”