You remember those crafting support letters that Ali sent out?

Well, before I found out about them and had time to text everyone an apology and assure them that they didn’t need to send craft supplies to my beggar daughter, my Mom, who never sees any bad in anyone, had already interpreted the letter for herself.

When I texted her, she immediately called me (because texting is not her preferred method of communication, which is good, since she can’t figure out how to use punctuation, so her texts always leave me paranoid that she’s suffering from depression or worse, hates me.)

(There’s nothing like texting your Mom the best news in the world (“I’m in labor!”) and getting a

So anyway. She called me and said, “I thought she was asking for a crafting project, you know – like she’s helped me make crafts for Cubbies. I figured she was offering to help me, and I thought it was so sweet of her! So I was thinking about what I need for my bible lessons at VBS that she could make for me.”

Every year, my Mom comes up with elaborate scenes and props and such to help keep the kid’s attention at Vacation Bible School.

Elaborate should have stopped me.

But my Mother’s optimism always rubs off on me (for a moment) and I said, “She can certainly help you with your VBS needs. What were you thinking?”

“Well, I need some sheep masks, but I don’t know if Ali could do them. Do you think she could cut them out of felt and glue fur onto them?”

She brought me two bags of supplies and an example sheep. 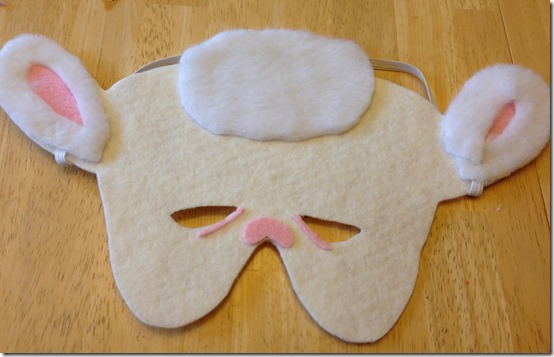 But I personally thought that her sheep looked like a cynical old man rabbit with some seriously loose jowls.

“I need twelve of these sheep.”

“Yes. Oh – and there’s only enough felt for ten white ones, so you’ll have to make two black sheep.”

“Yes. Because the bear costume scares the children too much, and I was thinking a mask might be less traumatic.”

“Do you have a template?”

Clearly, my Mother doesn’t remember raising me. Because if she did, she’d have no trouble recalling that I am the most un-artistic person to have ever lived. I cannot even draw a proper smiley face, let alone sculpt a bear face out of felt.

So I inventoried the supplies, and Ali and I decided to try and make a Sheep Mask during her craft time before bed.

We dumped all the stuff out on her craft table, stenciled a copy of Codger-Rabbit-Sheep, cut it out, then tried to style his ears with the felt and fur.

We left all of our supplies on her craft desk in a heap, and I promised to add the eyeholes the next day when I was in a better frame of mind.

The only problem was, Ali decided to Sharpie an outline of eye holes sometime during the night – at all the wrong places.

And really, I couldn’t blame her – because when I walked into her room the next morning, I became immediately high from the scent of E6000 glue left over from the night before. And she had slept in that drug den. It’s amazing she hadn’t crafted our sheep into Puff the Magic Dragon.

So on that first fateful mask, I had to add three tufts of extra fur – to cover up her stoned eyeholes.

It was the least sheep-like costume I’ve ever seen. 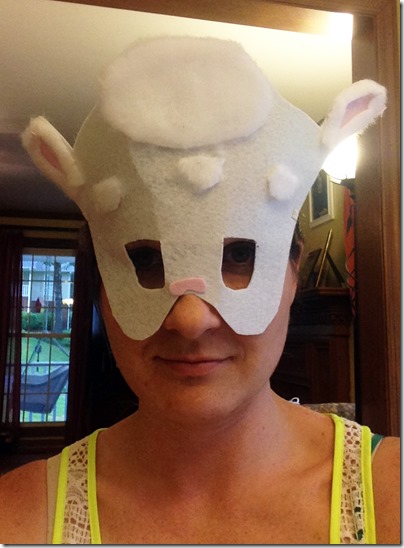 And we had to make eleven more.

In less than a week.

My Mom must have sensed my frustration from afar and called me.

“If it’s too much for you and Ali, I can get Mammaw to make them.”

“YOU CAN’T TAKE A CRAFT PROJECT AWAY FROM ME AND GIVE IT TO MY EIGHTY-FIVE YEAR OLD GRANDMOTHER. I’M NOT AN EMBECILE.”

To Mom, I simply said,

“Oh no!! It’s not a problem at all. We’ve got it all under control! You said…twelve sheep?”

I decided that the assembly line was the way to go.

Get Ali to attach ear felts and noses (since that was pretty much all that was on her level to do),

I made a few edits, including rounding the ears in hopes of detracting from their rabbit-like persona. And I gave up on the outlining of said ears with fur, because it might have made me cuss once.

(Just a slight suggestion of damnation.)

(But one should never allow themselves to become profane while creating VBS crafts.)

Also, the constant leaking of the E6000? Was nearly my tipping point. 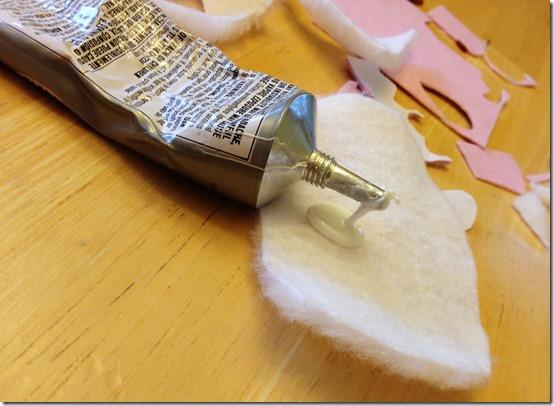 So I got our eleven masks to this level of success: 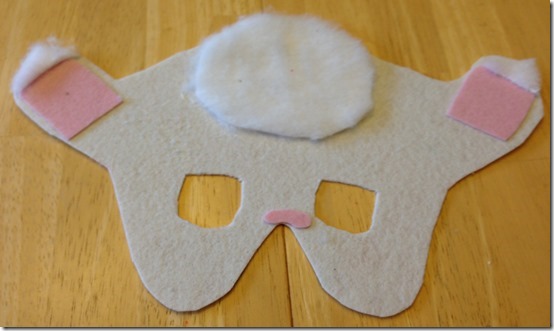 But what to do about the prescribed pink eye-markings stumped me. Mom’s template had eye-bags, and I didn’t want a flock of sheep with eye-bags.

So I experimented with eyebrows. But since I didn’t know the bible story in question, I didn’t know what sort of expressions the sheep needed.

Were they skeptical sheep? 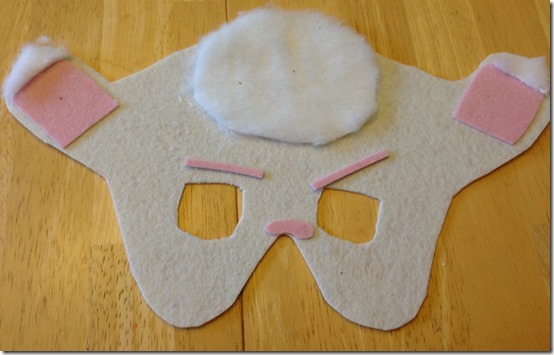 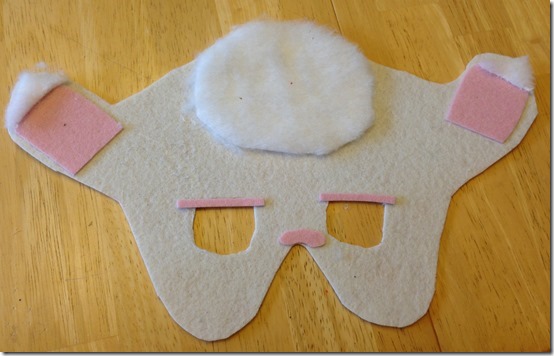 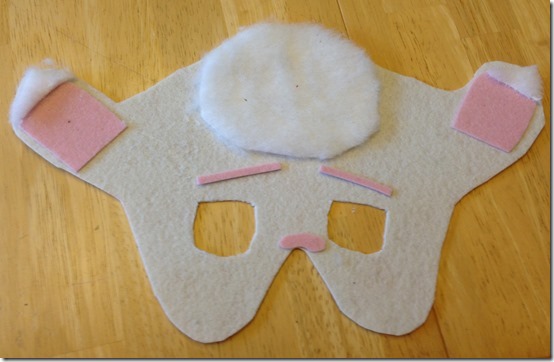 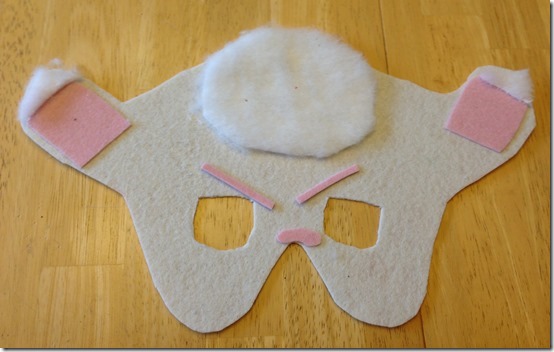 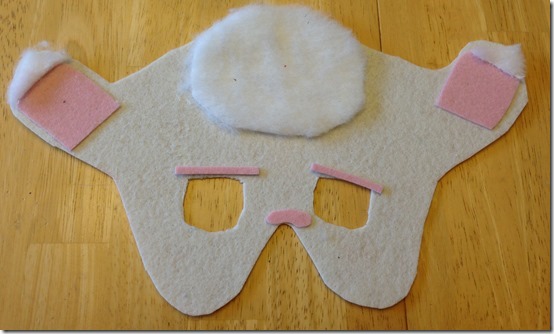 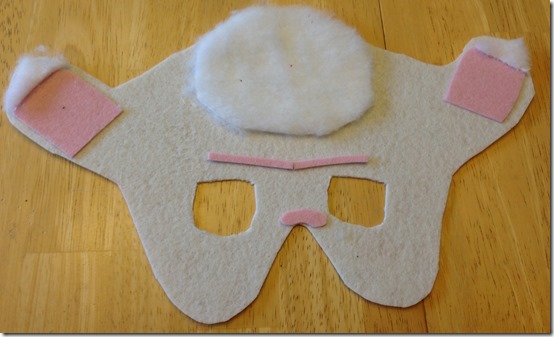 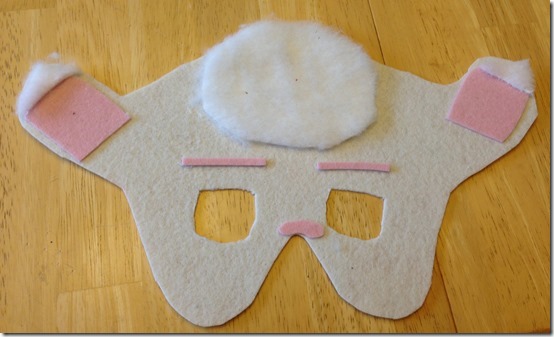 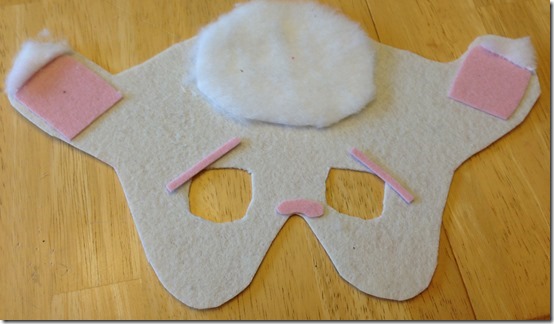 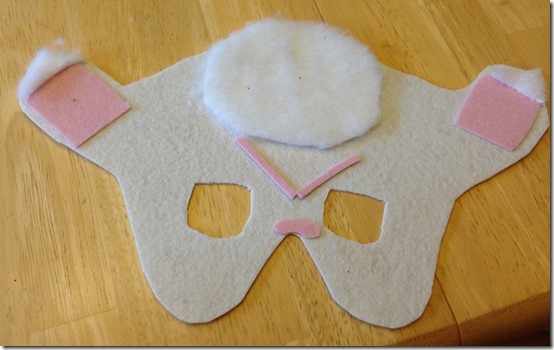 (The fumes from the dripping E6000 might have been to blame for the above exercise and uncontrollable giggles that accompanied it.)

Ultimately, I went with blank sheep. Because the whole analogy is that they’re stupid. Right? 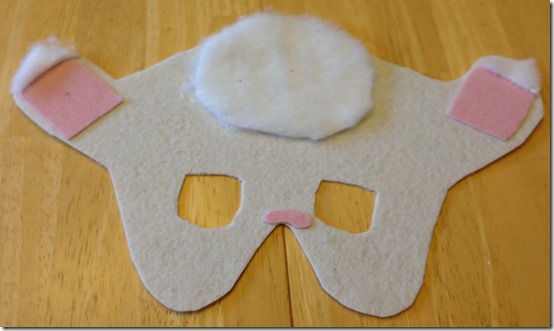 (Or perhaps I was just too lazy and/or flustered to cut out twelve pairs of eyebrows by then.) 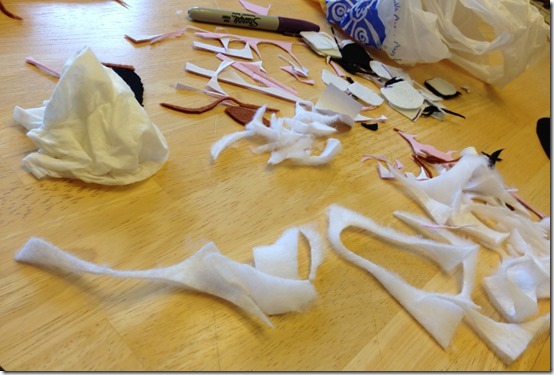 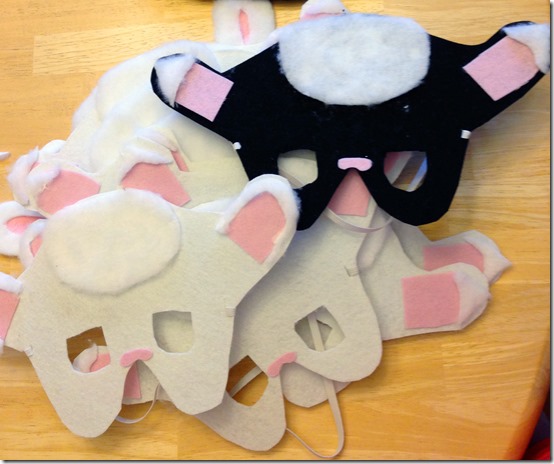 And mine did, in my opinion, look 10% more like sheep than my Mom’s, especially when shown on children. 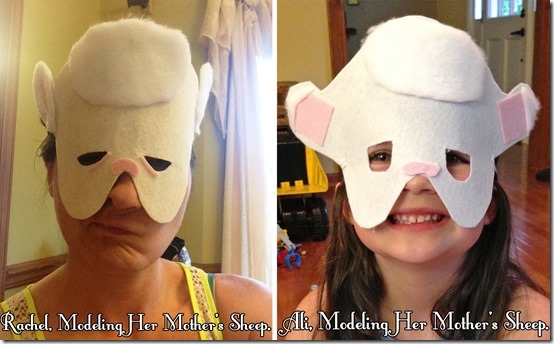 Then came the bear.

Despite my horrible ability with shapes, I just began cutting.

I was, after all, spent.

But God shone onto my crafting, and I actually cut out a bear-like creature. On my first try. And then figured out how to add bear-like accents. Without any help. 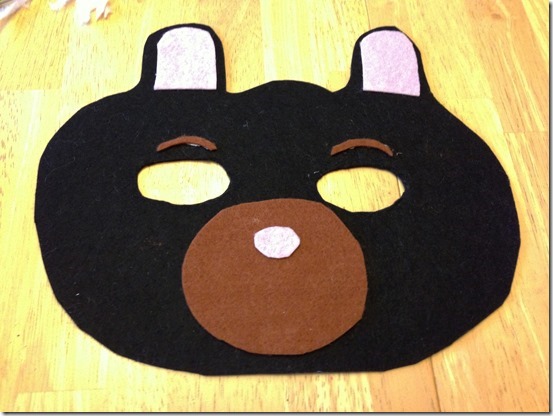 I WAS SO PROUD THAT ALL-CAPS DO NOT BEGIN TO EXPRESS MY SELF-ADMIRATION.

I squealed to Chris and held up my mask.

“You did that. Without googling?”

I texted my Mom, excited to get some positive affirmation without the skeptical dubiousness that my husband offered. 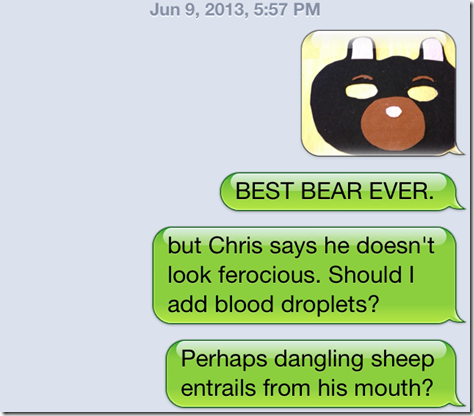 She gave me nothing.

(She did call later and remind me that she was attempting to not scare the children. She doesn’t realize that sarcasm can be conveyed via text.)

But I didn’t care. Because it was indeed THE BEST BEAR EVER. 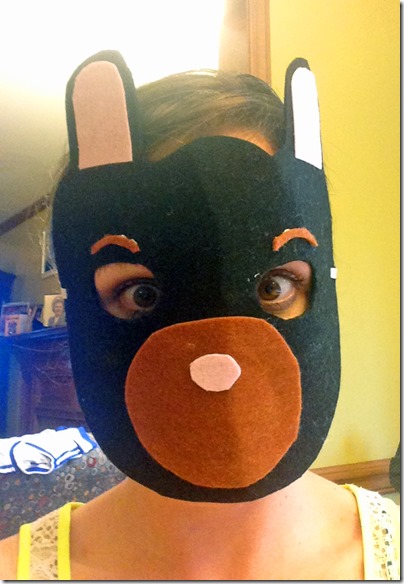 My mother was extremely gracious about my questionable sheep. The children, however, were not. When the sheep came onto the scene, Mom asked, “What are those?” And one of the children said in a confused voice, “Um…Mice?” 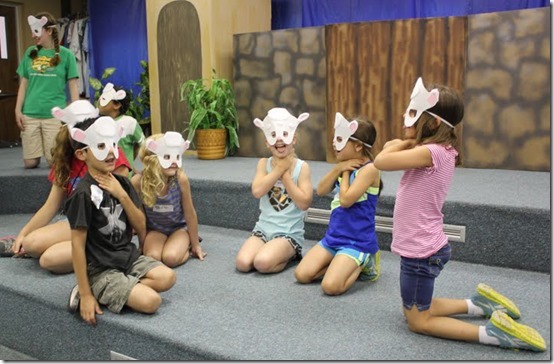 As for the bear, one of Mom’s teenage actresses decided to turn him upside down and become a Walrus. 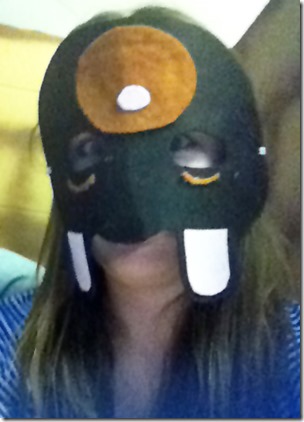 …which made me even more proud of my original creation – because I had crafted such a fantastically versatile animal.

50 thoughts on “We All, Like Sheep, Have Crafted Astray.”