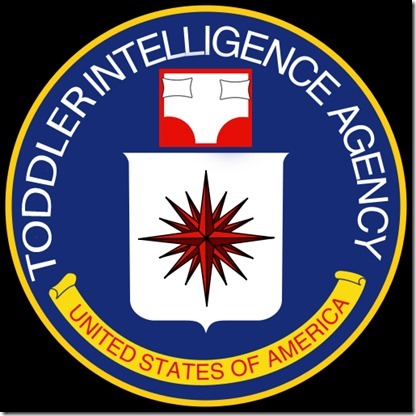 The Toddler Intelligence Agency (TIA) has determined that “Noah”, hereafter named “The Agent”, has allowed a serious breach in confidential agency terminology.

On the afternoon of May 15, The Agent did so use a Code Sleep Security Command (CSSC) in the presence of “Mommy”, hereafter known as “The Target”.

After running an impressive exercise battery of refusing sleep for more than two hours despite The Target’s every effort at exhausting him that morning, in a delirious stupor of half sleep, The Agent had the following conversation with The Target, which was recorded and transcribed by undercover field agents:

Prior to this conversation, The Target had no knowledge of the existence of CSSCs. It is apparent that she suspects there is power in the phrase, because she repeated the CSSC that evening at bedtime, and again the next day at naptime, both, of course, immediately successful.

The Target then proceeded to experiment with a more blasphemous use of the CSSC, stating it over the baby monitor.

She was even able to successfully use the CSSC during a Lunar Toddler Eclipse, which is that period of time when naptime and The Agent’s poop schedule cross orbit, creating the most effective sleep-ending action known to the TIA. The Target proceeded to get The Agent, change his diaper, and then lay him down and tell him to Take a Sleep.

The danger of this power in the hands of The Target can not be underscored enough.

Due to this grave security leak, The Agent must be called in immediately for a reprogramming. He may also need reformatting to prevent another similar informational leak.

All means necessary are authorized to contain this breach.

Breaking Update: The Agent has been successfully reprogrammed. The CSSC is no longer functional, and the new Sleep Key has triple encryption. Refusal to Nap Maneuvers are back in full operation.

8 thoughts on “When Intelligence Leaks.”