It was Monday afternoon. I was playing with the kids, as my job description dictates that I should. The house phone rang.

Actually that’s not quite accurate – the copy/fax machine rang – which has no handset to answer. I lost the last remaining house phone weeks ago.

So instead of getting up to answer the missing phone, I waited for the answering machine to pick up so that I could determine whether I needed to call them back, all while wondering to myself as to the possible reason that I even have a house line since the lost handset’s battery lasts all of 2.65 seconds and, as such, I never attempt to use it even when it isn’t lost.

A deep, serious voice began reverberating throughout the room.

“Hello, this is Henry from [Your] Bank. I need to speak to you about your accounts with us. Here is my direct number – please call me as soon as you have the chance.”

I despise calls like that, as I can feel anxiety over approximately 617.5 potential crises per minute.

Has someone hacked my account? Stolen all my money? Left my checks for dead?

Did I overdraft? Make a mistake?

Did they read my blog post about their teller love notes? Are they finally calling to get my input on whether they should dot their i’s with a heart or a flower?

Are they following up to make sure that my husband got that curly-cued lovey-dove postcard in the mail from the female teller last week? Because he did. What is UP with that??

Is this about me complaining about one of their policies on Twitter a couple months ago?

Has the IRS frozen my assets? Launched an investigation?

IS THAT THE FBI DRIVING UP THE STREET RIGHT NOW???

So I dropped my kids like last week’s sippy cup and ran to find my cell phone.

I listened to the chilling message again and hurriedly jotted down Henry’s number.

I called him back.

A kinder, perkier, female teller (who smelt of mailing postcards to other women’s husbands) answered the call – clearly Henry lied about this being his direct number.

She included the branch location in her greeting – not even a branch I visit, but it was the one my husband frequents.

I asked for Henry. She put me on hold. I sat waiting, feeling my heart jumping inside my ribcage as my toddler jumped in synchronization on the outside of the same poor ribs.

As I waited, I continued my rundown of every possible choose-your-own-adventure ending to this call.

This WAS the branch I complained about to their Twitter Person. I bet Henry is now calling to let me have it for tattling on his branch.

I hate confrontation. Maybe I should hang up now.

But it was too late. Henry picked up the line with his deep, rich, smoky voice.

“Uh hi, this is Rachel. You just called me?”

“Oh yes, Rachel. Thank you for calling me back. How are you today?”

“I called to find out if you have ever considered having a personal relationship with a banker.”

“I called to see if you wanted to have a personal relationship with me. As your banker.”

“Well, um, what exactly did you have in mind?”

”I just wanted to let you know that I am here for you and Christopher. If you ever need a line of credit, or a loan, or any money…”

“We have some great interest rates right now if you decide that you do.”

“Thank you Henry, have a nice afternoon.”

I hung up, leaving Henry free to solicit more married women. And I sat there, stunned.

Did he really just ask me that? With those words? In that order?

And then I did what any red-blooded American would do: I turned to Facebook and Twitter to make sure I wasn’t overreacting.

Twitter helped me nail down the important questions to answer, 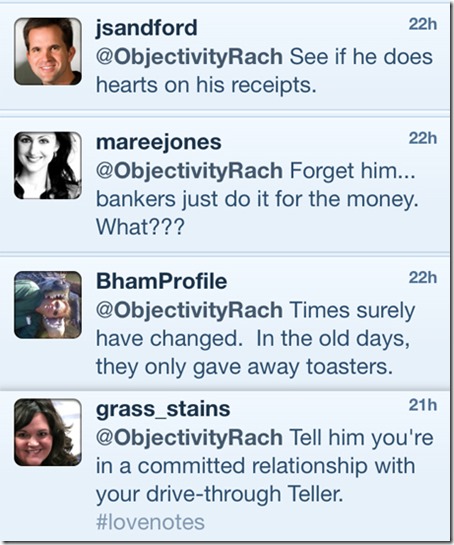 And Twitter gave me the opportunity to identify a potential Henry. 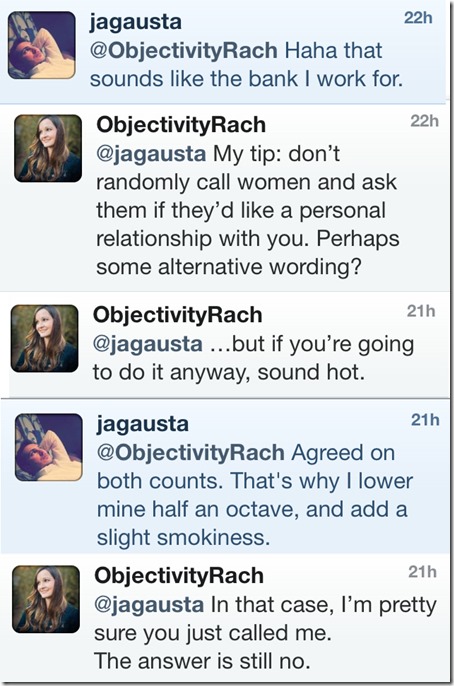 (If ever one needed to argue the importance – nay, the vitality of Social Media in the Modern World, awkward banking situations prove it every time.)

So I finally sat down to properly answer Henry. After all, I definitely left him without a clear answer, and I’d hate for him to be sitting by the phone, plucking petals off of a Tulip while whimpering to himself, “She loves me, she loves me not…”

So here’s my response, Henry. If you’re out there. 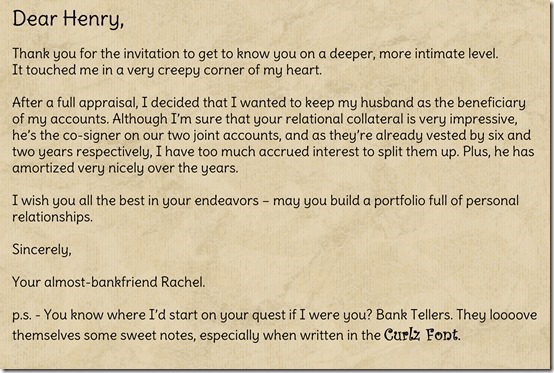