It always makes me feel old to admit that I don’t understand a cultural phenomenon.

Whether it’s music, fashion, or pop culture (I’m talking to you, Ke$ha,) I worry that I’m out of vogue if I just can’t comprehend it.

For quite some time now, I’ve felt that way about the title of “Hipster.”

It’s not that I’m against hipsters at all – it’s that I have no idea what that term means.

Once, I even Googled Hipster. Then Wikipedia’d it. Then Urban Dictionary’d it.

(I was careful to do these things while no one was looking because of my fear of being laughed at for my severe out-of-touchness.)

But I still didn’t understand what, exactly, constituted a hipster. There seemed to be guidelines about politics and worldviews, but those seemed to be vastly varying depending on the hipster in question. And there were vague fashion ideas, such as dudes walking around in super-skinny jeans with baggy hats and girls wearing vintage clothing in funky ways. But that didn’t seem like enough characteristics to define a movement. A generation.

I agonized over my inability to grasp the concept.

I don’t understand the world!! THE WORLD I LIVE IN!!!

I’m totally going to get kicked out.

Why couldn’t I understand? What does it all mean?

So I accepted the fact that I was old and no longer relevant and hobbled on with life.

Until I was having a Twitter discussion with the social media manager from the Birmingham Public Library. And he stated this astounding piece of information.

I would really like to give you a 1-year gift membership into the BPL Friends, b/c you’re a mom, a writer, a reader, & a hipster. :)

Could this really be?

Could I actually be something that I didn’t even understand?

I’m fascinated and must know: what qualifies me as a hipster? I was sure I was too old. :-)

It was just a general feeling from your tweets. Plus, I’m one and I’m even older. :)

So he still didn’t explain what it was.

But I now had a clue – the secret lies with my tweets.

WHERE IS NICOLAS CAGE WHEN YOU NEED HIM?!?

I thought about my tweets.

I tried to imagine my twitter person as a real person.

I put horn-rimmed glasses, a vintage shirt, a scarf, skinny jeans, and Converse sneakers on my imaginary twitter persona.

I Wikipedia’d it again. I studied the characteristics like a Final Exam that counted for 80% of my grade, but very little sounded like me. I Googled “Am I a Hipster Quiz” and took one, but at the end of the quiz, they insisted on having my email address and then the website crapped out before giving my my life-changing results.

(If they hack my Paypal account with that information, some quiz-writing hipster somewhere is going down.)

I considered marching down to that very library that started this soul-search to find a book that looked something like this: 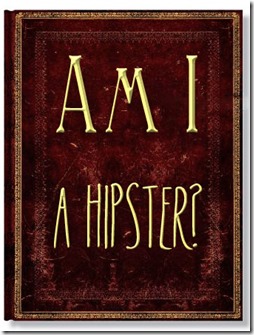 I finally opened up and shared my humiliating angst with Chris. Then I asked him if he understood what a Hipster is.

“Yeah, I guess so. I think I’ve always understood it…my mental concept of it has just grown based on the context in which I’ve heard the term used.”

Great. He gets it but I don’t. And he’s centuries older than me.

He threw out some random notions, like nonchalance and Apple products and nerdy being cool.

And I just felt more alone in my ignorance and inability to grasp important cultural concepts.

And worse yet, to not even know where I stand in this monumental situation.

Which brings us to you.

So, my favorite internet people in the entire world,

1. Can you explain, in a way that my aged mind can understand it, what exactly defines a hipster?

But be nice about hipsters, because I may be one – at least on Twitter.

I just wouldn’t know it.

40 thoughts on “Hipsters: A Quest for Truth.”