Sometimes people find my blog, thanks to The Googles.

These finders can sometimes have strong opinions, bottled-up anger, or an intense need to vent. These people, who are never regular readers, also don’t understand the context of my blog, which is largely based on the verifiable fact that nearly nothing I say should be taken seriously.

Which makes for some fabulous comments.

Some things that I’ve written lend themselves more to the Angry Googlers, such as my Bra-Fitting post (despite the fact that I linked in my recant,) My Chick Car Survey and Study Results, and, oddly enough, The Truth about Cats and Dogs.

But my favorite comments came from other posts.

So here they are. The top eight best worst comments I’ve ever received.

8.  I wrote a post in 2011 about discovering the crushing truth that the DirecTV Miniature Giraffes are not real. I likened my heartbreak to that of finding out that another infamous being is not real, and one Googler, two years later, felt that perhaps I was dis-servicing the entire world. And maybe I am.

So here’s the official warning:

PARENTS: do not let your Children of Santa Age read my blog.  Also, you might not want to let them use Google without supervision, as I’m pretty sure I might not be the only person out there sharing this bit of information.

7.  A comment that I did not allow to stay on my blog because, well, it was just too unoriginal, was this one, left by someone who had Googled something, found my blog, and spent about five minutes there.

“You are a complete moron and a waste of precious oxygen.”

Thank goodness I have people in my life that will speak truth to me.

6. This one wasn’t a comment, but a blog post reviewing of one of my blog posts. The post in question was one of the only pieces of fiction that I’ve ever written. It was a tongue-in-cheek version of The Three Little Pigs, and apparently I seriously ruined the moral of the story. 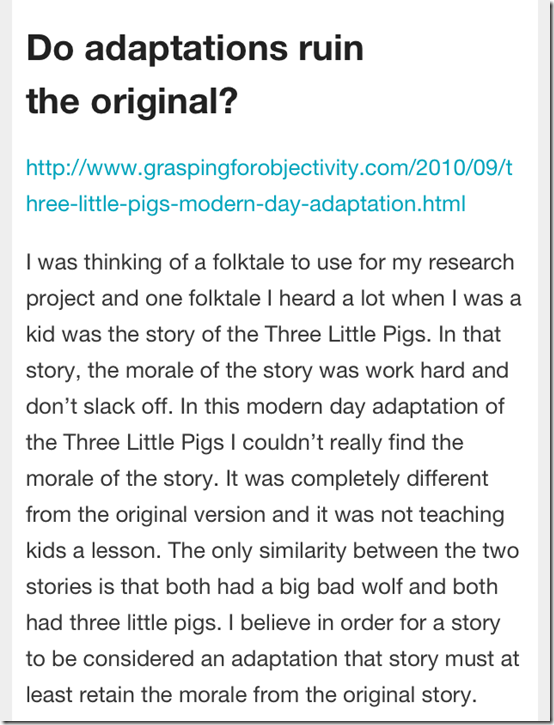 …or was that morale. I don’t remember the morale of the Three Little Pigs, but I guess they were somewhat upbeat when fighting off the Big Bad Wolf…

Then there are the jean blogs. Clearly I don’t expect everyone to agree with my conclusions, and I have quite a number of dissenters. But a few stood out from the crowd. 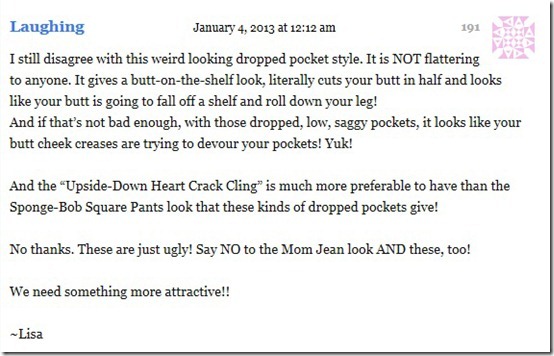 (I’m still trying to visualize a butt rolling down my leg, and desperately trying to get rid of the hungry-butt-cheek visual.)

4. The Person Who Desires Cliff’s Notes:

(I just prefer not to discriminate against men named Brian, that’s all.) 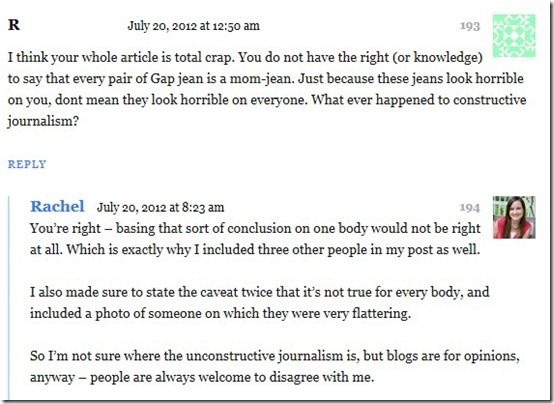 Moving on from the jeans.

2. Four years ago, I taught Ali to name the states because she was interested in geography and enjoyed it. We spent about five minutes a day on the project – five minutes that apparently should have been much better utilized:

Thank goodness for that smiley at the end – didn’t you feel like it made everything all better?

1. My all-time favorite commenter, though, happened across a post where I described playing with a Copperhead before realizing it was a Copperhead. My neighbor identified it for me, then beat the snake into snake pulp.

A year and a half later, Pete G set us straight.

My eyes have been opened. I am a city puke. I’m off to set things straight – and find a baby skunk to love.

50 thoughts on “The Best Worst Comments.”