Last weekend, Chris and I flew to Virginia for a friend’s wedding.

(Really, we flew to Virginia to have a date weekend away together, and thanked the friend profusely for providing us the excuse.)

(No really. It was all for the friend. Not at all for us to stay in a beachfront hotel room and eat fancy seafood and TALK LIKE ADULTS all weekend.)

I love flying. LOVE IT. I love the excitement of the airport (including the denim watching opportunities), the SkyMall catalog, and the watching of cities far below. In fact, I usually get mad when flying on cloudy days, because it takes away part of the fun.

But as we were flying somewhere over the clouds of North Carolina, I saw a strange puffy cloud figure walking toward us. You can’t see it in this photo, but trust me – it was the only vertical cloud, standing atop an ocean of horizontal clouds, way off in the horizon. 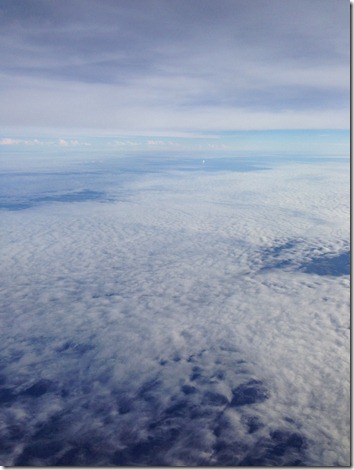 (If I had edited these photos at all, I would have an arrow pointing to it. But this post is called “unedited” for a reason. So you get what you get.)

It looked like a sky angel as it hovered over the cloudy sea, flying toward us gracefully.

But then it got close enough, and I realized it was just the Michelin Man. 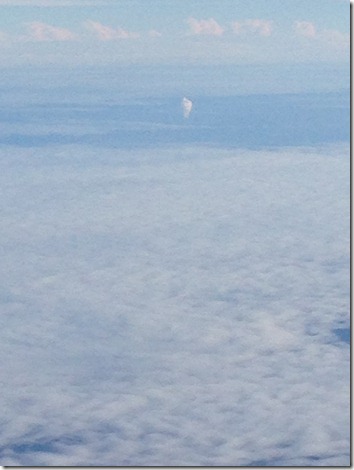 But still. Seeing the Michelin Man atop a mass of clouds HAS to be the sign of a good vacation. Right?

As opposed to seeing this sign when walking into our hotel: perhaps notsomuch a sign of a great vacation. 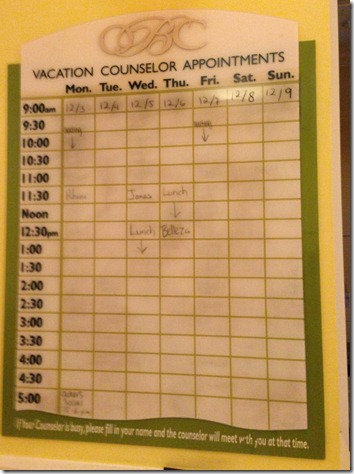 But it turns out that the Michelin Man was right. We had a fantastic trip, enjoying gift shop oddities, 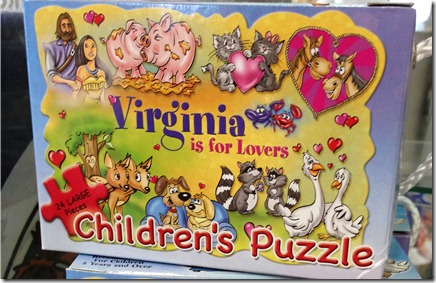 including gifts that are for a VERY specific clientele, like these wine bottle holders: 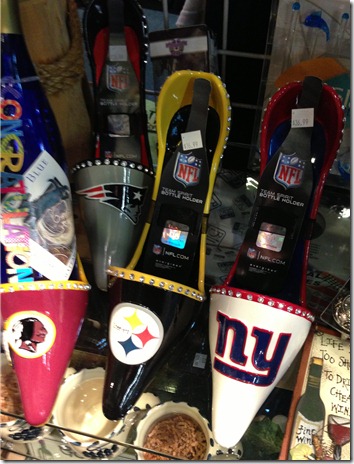 For all of the NFL fan, pointy-toed stiletto wearing, porcelain knick-knack collecting wine drinkers in your life.

We were in Norfolk, who apparently long ago adopted the Mermaid as their city symbol.

It was quite lovely – we saw the same mermaid at the airport, on the street signs, on the roads, on the carpet, in the gift shops, on the restaurants, on the hotels, and even here: 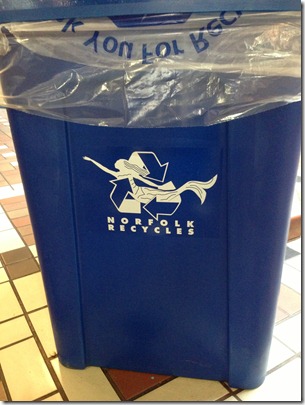 Norfolk: The city that always recycles their Mermaids.

But Norfolk (and Virginia Beach, where we hotelled,) were beautiful. I found it to be the perfect opportunity to play with the new Panorama feature on my iPhone, 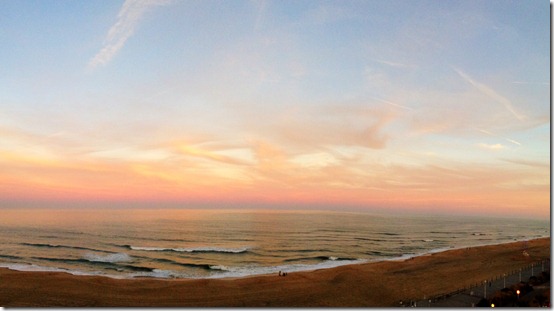 It’s a fun feature – what can I say? And it was much more fun to capture Virginia’s panoramas than my previous opportunities, which was…a football stadium.

We did a little shopping while we were un-strollered, giving us the opportunity to check out the Virginia fashion scene.

Unfortunately, they seem to have been bitten by the same printed denim bug that Alabama is ailing from – except possibly even worse: 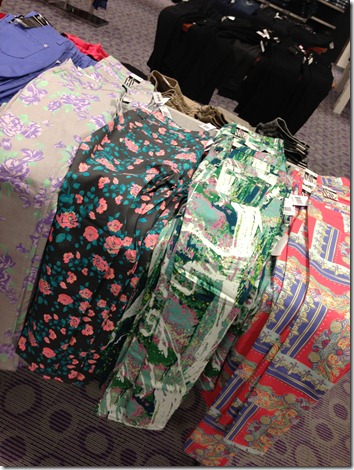 Also unfortunately, The Ugg Era seems to have not quite died, and has only gotten sparklier. 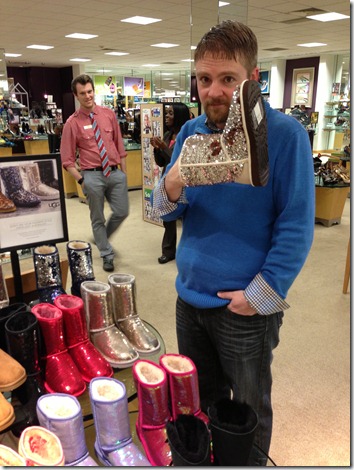 But there was one store that stuck out the most in our shopping adventures: Love Culture. 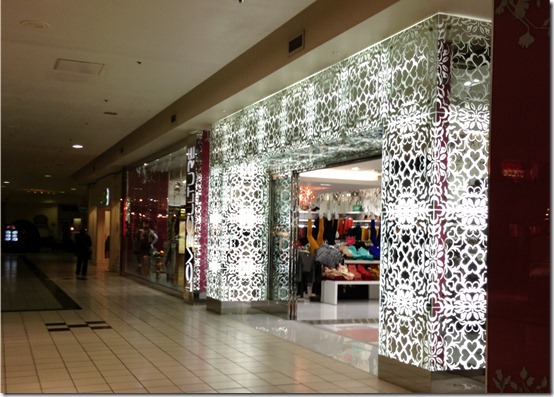 They had some fascinating pieces, including these sequined French Hats, 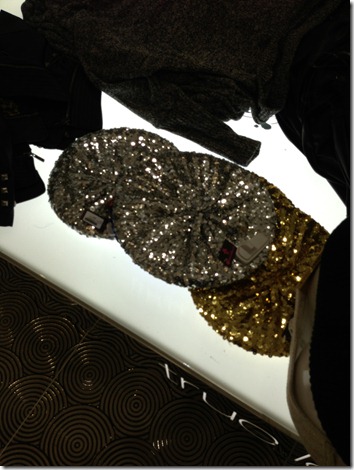 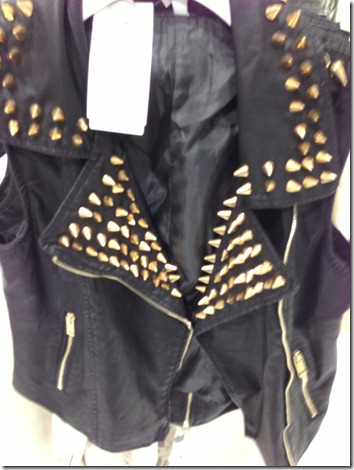 Oh – and would you like a bustier to go under that vest? 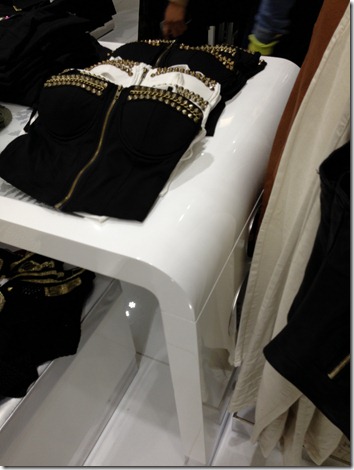 The shiny gold and silver snakeskin jeans ALMOST piqued my interest, but I put them down and kept walking. 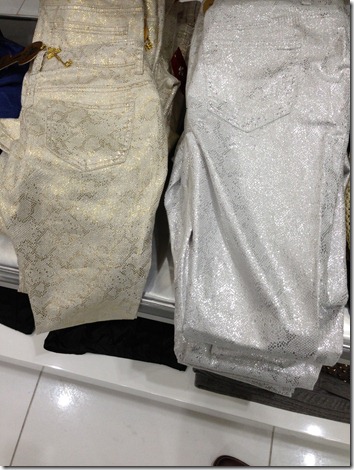 …only to be accosted by Beetlejuice outfits, 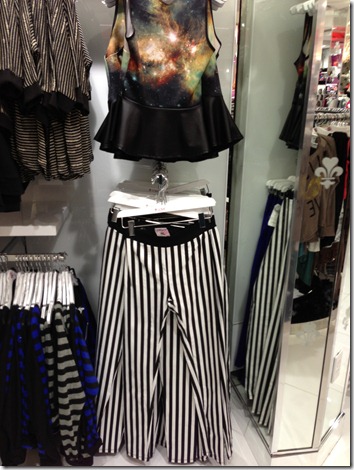 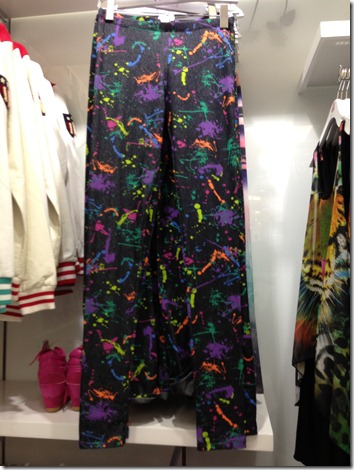 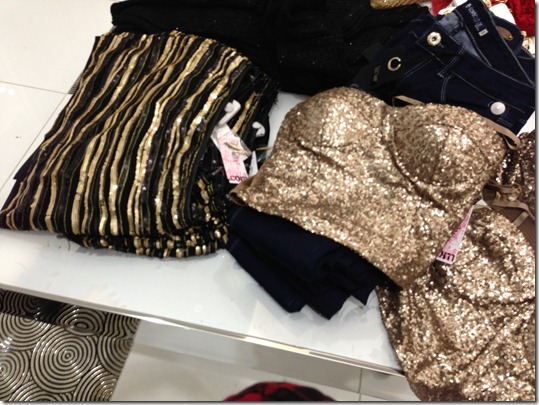 Chris and I were highly enjoying our mutual fascination and horror at all of these clothes.

We came across this section. 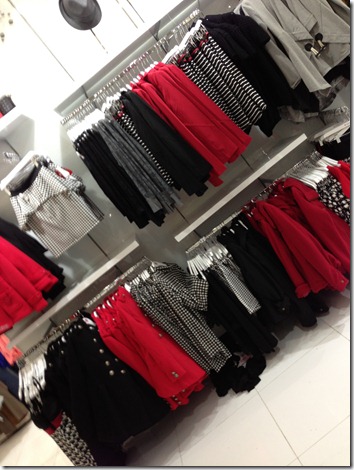 In Virginia. Which is like, what? Four states away from Alabama??

And we’re not talking just any houndstooth. 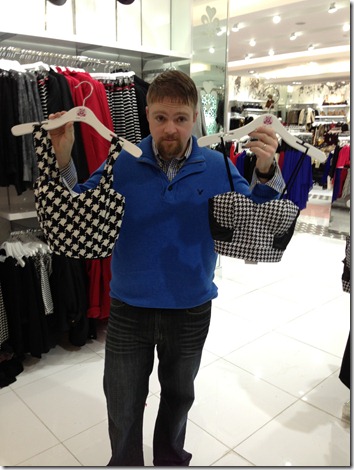 I’m a supportive wife and all, and I like for my husband’s football dreams to come true. But I was NOT putting those half-shirts on.

So we compromised and I chose two not-quite-as-skanky-but-still-committing-fashion-sins outfits. 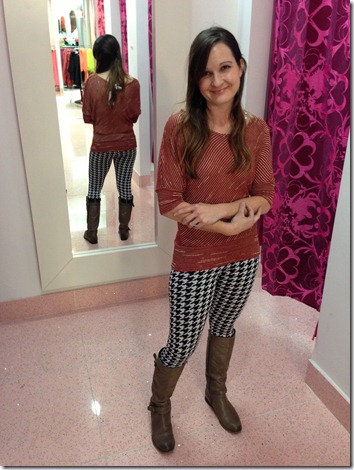 But it was the second outfit he was really excited to see.

Unfortunately for him, the shirt was about 18 inches shorter than I was prepared for, and so I hadn’t picked out an undershirt to go with it.

And there was NO WAY I was walking out of that dressing room with my pillowy, lumpy, blindingly white, twice-sliced-open belly hanging out for all to see. 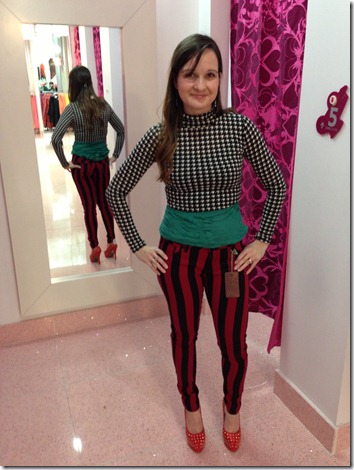 “It’s the camisole I already had on.”

Although he may have still not forgiven me, I bought nothing.

But the next day, we dressed up in normal adult clothes and went to the wedding. 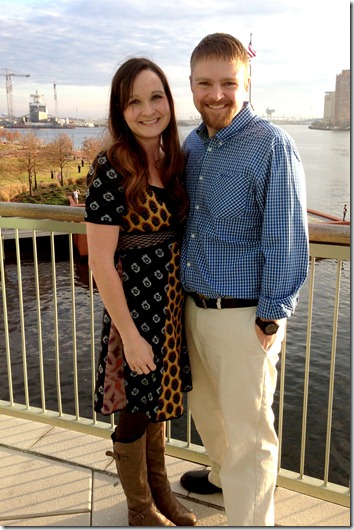 We enjoyed the sunset, 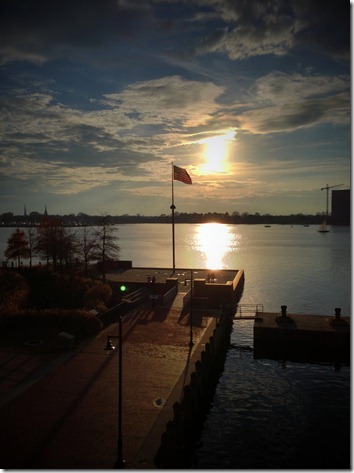 And then we flew home, finally crawling into our own beds after midnight Sunday night.

I headed to pick up the kids the next morning, who were, as expected, not ready to leave Gramamma and Pop’s.

…but were all too excited for a surprise visit to Daddy’s office: 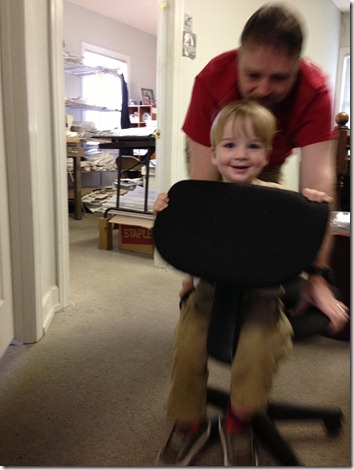 It was time for them to come home, though, because they’d had nearly all of the fun, late nights, and special treats that their little bodies could endure.

And I knew this because for the first time ever, and I do mean EVER ever, I came into Ali’s room at the end of her quiet time to find this: 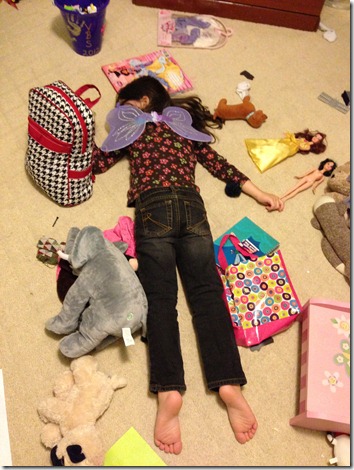 My kids do NOT fall asleep unexpectedly.

After I nearly panicked and watched to make sure she was breathing, I bent over and realized that she had actually fallen asleep in mid-play. 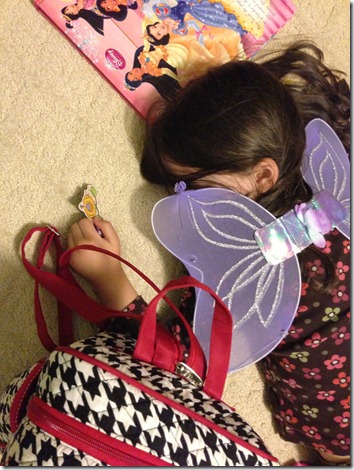 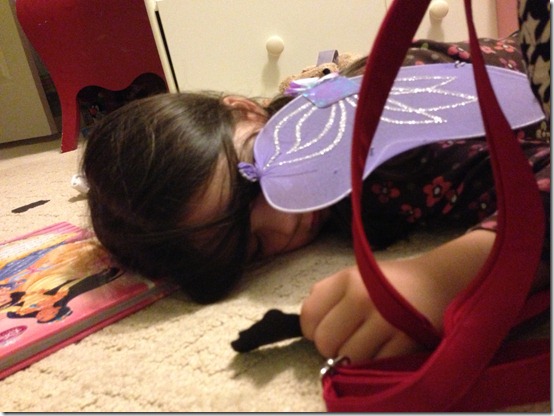 The Grandparent Effect: It can happen to you.