There are many things about parenthood that look much more romantic on the front side than they actually turn out to be.

Rocking your newborn back to sleep in the middle of the night, for one.

Go ahead…take a minute to reminisce on what your pre-childbearing image was: long white silk nightgown, perfectly rolled hair, cheek-to-cheek with a snuggling, warm, delicious infant – just like on the diaper commercials.

Now picture what it was really like: half asleep, manic from lack of sleep, puke covered, possibly poo splattered but too dark to tell and you didn’t DARE turn on a light to check, desperately moaning lullabies and frantically rocking in hopes that the arch-backed angry baby would JUST SHUT UP FOR ONE BLASTED SECOND.

I propose that Santa is another one of those items of dashed romance.

Maybe we’re terrible parents, but it seems completely and wholly unnatural to propagate a farcical story about a magical old man who has an entire colony of enslaved LPs building toys that could just as easily be bought at Amazon.

And don’t get me wrong – we went into this with the fanciest of ideas.  We debated heartily on the pro-Santa side of things when our friends cast their doubts.

But when our first kid actually got old enough to understand and actually…BELIEVE, things got weird.  It felt awkward.

But we stuck to our moral position.  We played the game.  We told the lies.

And quite honestly, were shocked when Ali bought it.

She’s the practical type – you won’t be convincing her that you pulled a quarter out of her ear or that you can remove your thumb.  Even at the very first mention of the Tooth Fairy, she scoffed and said, “Mommy – you KNOW fairies aren’t real.”

But she believed the Santa crap.

And last year, we finally figured out why.

And plus, she gets other deliveries.  The UPS man makes regular stops at our house, and she’s well acquainted with terms like “Zulily” and “Tea Collection.”

So why shouldn’t Santa Claus make a stop once a year?

That’s right.  To her, Santa Claus is nothing more than a Glorified UPS Man.

What can Red do for you?

In fact, just this week she told me,  “Mommy.  My friend told me that Santa Claus isn’t real.  Isn’t that silly?? I guess she hasn’t seen him – he’s right there at the mall!”

However, she’s never wanted to actually visit him.  And, being that she was extremely shy since birth, we never once chose to put ourselves through the pain of forcing her.  The closest she ever wanted to get was to peer down at him from the upper floor of the mall and watch the chaos below.

And Chris and I  scoffed at those parents – the ones with screaming kids in the endless lines who paid $49.99 to have a 5×7 of their red-faced, snot-covered, terror-stricken kid being pinned down by some strange man with neglected facial growths.

But this year was different.

This year, Ali has been writing voraciously.  This proclivity spilled over into the creation of a Christmas Wish List.

“YOU.  Are actually going to go sit in Santa’s lap and talk to him??”

That night, I told Chris of her plans.

“I know.  She’ll never do it.  We’ll wait in line for an hour and she’ll back out at the last minute.”

But Ali was insistent and often with her reminders of her impending errand.

But then another list was made.  And the plans were on again. 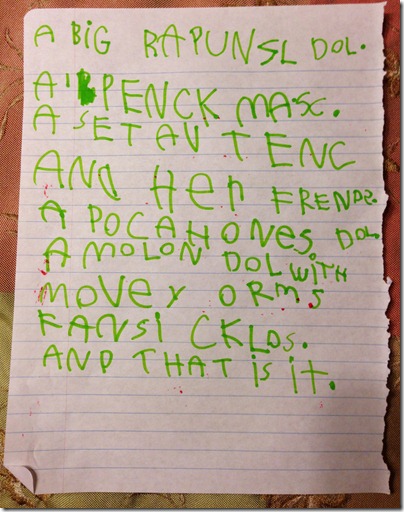 This time I ensured that the list didn’t get lost by
a) confiscating it immediately,
b) photographing it just in case, and
c) making plans that very evening to make The Big Visit.

So Wednesday night, I dressed my children in the expected hues of green and red, and as soon as Chris got home we set out for the mall.

We still had no faith in our daughter’s follow-through, but she was excited and insistent. 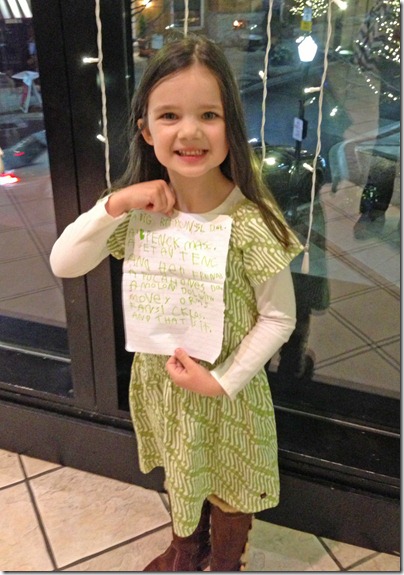 We had wondered whether the long line would give her time to work up her courage or talk herself out of it, but either way, it was not to be.  There was all of one family in front of us – one of those inexplicable couples that removed the swaddling blankets from their two day old infant for the opportunity to give her to an old man who’s touched at least 1,563 kids since he started his shift, 1,560 of them with green snot spewing from their facial orifices.

Ali peeked around as the too-young-to-focus infant stared at the ceiling while getting her photo taken with the Germy Claus and, I suppose, telling him her hopes and dreams via telepathy.

And then it was our turn.

We had already decided that we’d throw Noah in with her – after all, he yells “HEY!!” at every passerby – it wouldn’t kill him to sit with a felt-covered stranger for a second.

But before we could unhook Noah from his stroller, Ali had already run up to Santa.

“Hi there! Come sit on my lap and tell me what you want for Christmas!”

Ali unfolded her list and she and Santa hunched over and perused it together, as I maddenly watched the camera people who were too occupied with selling Newborn Parents the biggest photo package possible to come back snap the completely perfect, un-posed, genuine photo of my kid, her list, and The Man.

I got so frantic that I very nearly pulled out my iPhone and broke the 1000-point-font rule screaming  “ABSOLUTELY NO PHOTOGRAPHY,” but I was too afraid that Santa would come unglued and go North-Polal on me.

By the time the photographer turned around, Ali had put away her list and I had plopped an oddly unwilling Noah onto Santa’s lap.

And they took the cheesy, posed, totally stereotypical photo with Santa. 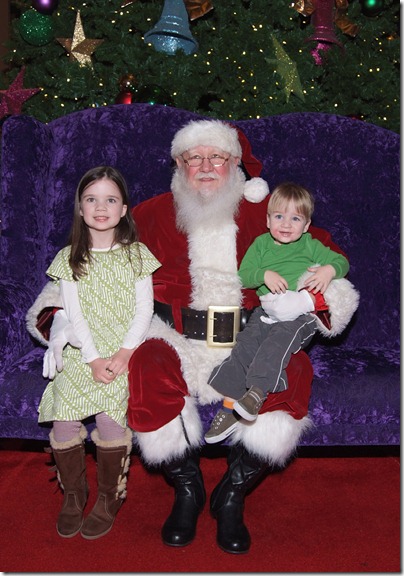 And yes, I bought it anyway.

Because I’m one of those parents.

35 thoughts on “On Lying to the Children.”