I love to bargain shop.  But I don’t do well in places like TJ Maxx, Thrift Stores, or Consignment sales – I can never find anything.  Where I have always done my best work is at Outlet Malls.

For years, every time we went to the beach, I would greatly anticipate my trip to the Outlet Mall.  I would find amazing deals on and exactly what I was looking for, and be able to walk away a satisfied woman (with many shopping bags.)

So in 2010 when The Outlet Shops of Grand River opened less than ten minutes away, my quality of life skyrocketed.  I’m pretty sure I was one of their first guests, and was very quick to blog all about it, and unofficially crowned myself as their Goodwill Ambassador. 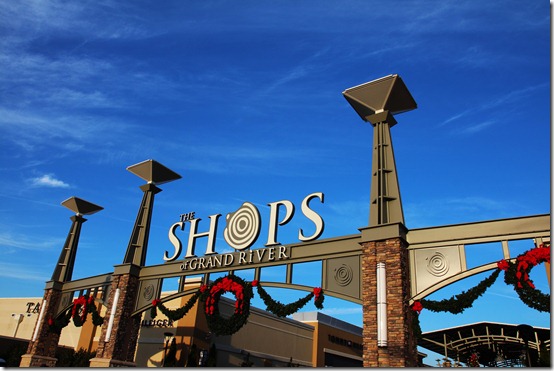 But I noticed a trend.  Everyone else thought that Grand River was too far away – practically a day trip or something.  I would beg my friends to meet me there, telling them how much my kids loved running around and how good the deals were, and they would balk every time.

And then my head would explode.

But as soon as they arrived, their first words were always, “That didn’t take nearly as long as I thought it would!”

I KNOW, people.  That’s what I’ve been telling you!!

Grand River is within 20 minutes of most neighborhoods in Birmingham, and no more than 30 from almost all of the metro areas.

And the stores – the stores are fantastic.  I buy nearly 100% of Noah’s clothes from Carter’s, which always has amazing deals.  And every time I shop there, I run home and immediately figure out how much I saved.  Then, with a squeal of geeky glee, I announce to Chris that “I bought it all for 80% off!!! Beat THAT at a consignment sale!!”

There are several other kid’s stores, as well: Learning Express and Toys R Us for gifts, and Osh Kosh, Children’s Place, Gymboree, and Gap for clothes.

(Although I personally usually choose to walk a wide berth around all Gap stores.  I have nightmares about them having my photo hanging up in the breakroom with a skull and crossbones superimposed over my face.)

My favorite stores for my clothes are Guess (who also supplies most of Chris’ jeans – I’m sure they’ll be featured soon in a Dad Jeans Post near you), Maurices, Rue 21, and Banana Republic.  Oh – and Charming Charlie for all of my accessories.

They also have some great shoe stores out there, including Naturalizer, where I finally found the boot I’d been looking for at nearly half-off (!!): 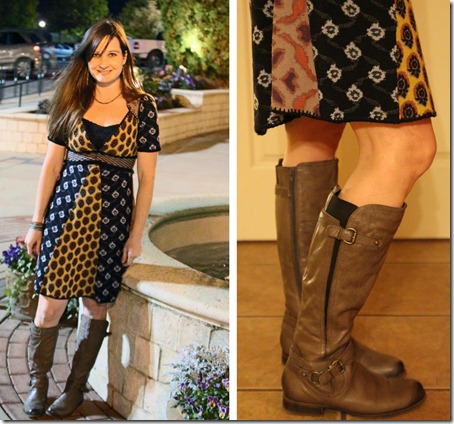 But I’m not the only ones who love Grand River – if you ask Ali what her favorite mall is (and she knows them all,) she always shouts, “The OUTLET mall!!”

Not because she’s already a shopaholic, but because they have fabulous outdoor areas for running and playing. 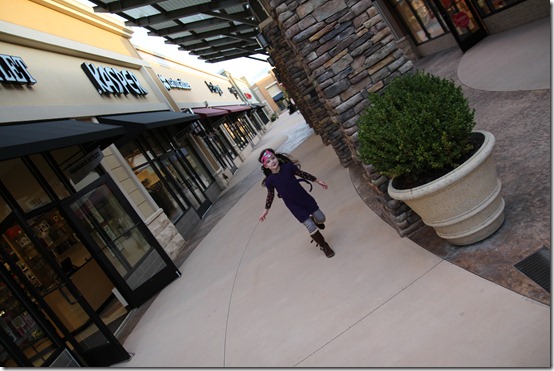 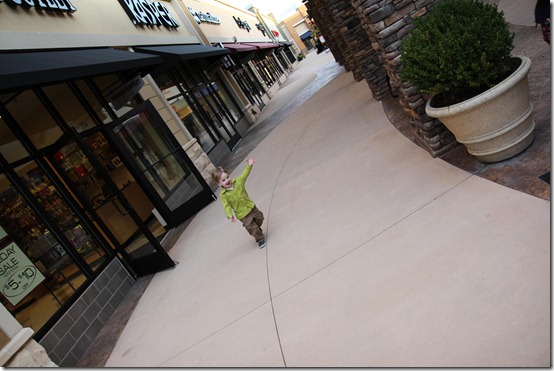 How to use the benches for balance beams… 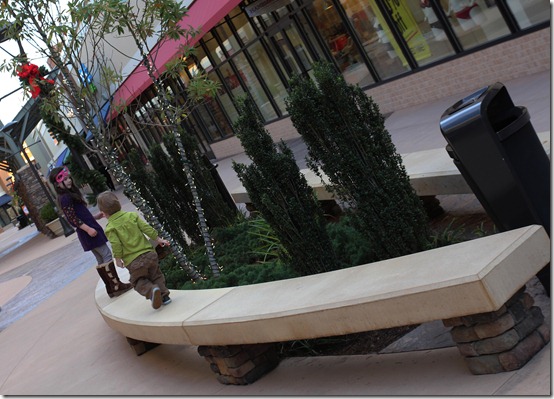 Where the gigantic patio is that’s great for longer races… 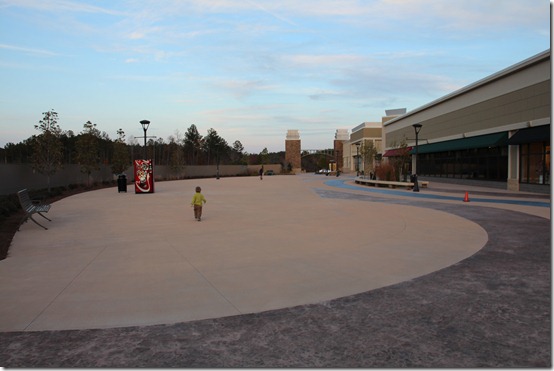 And how to properly climb a turtle in the kid’s play area. 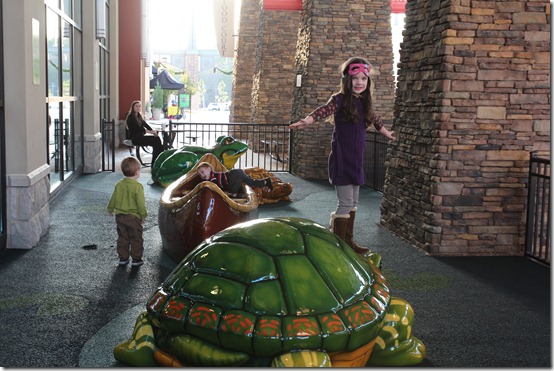 Although we usually go in the daytime, I took the kids out to experience the early part of the tree lighting event a couple of weeks ago, and there was something more magical about being there as the sun went down. 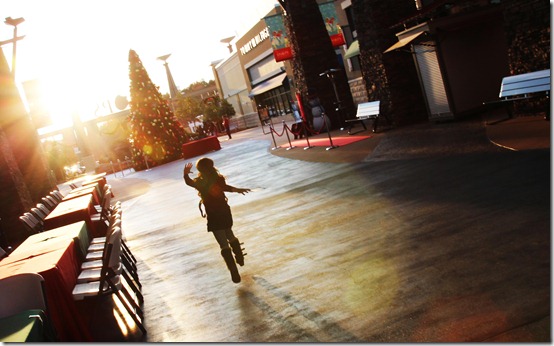 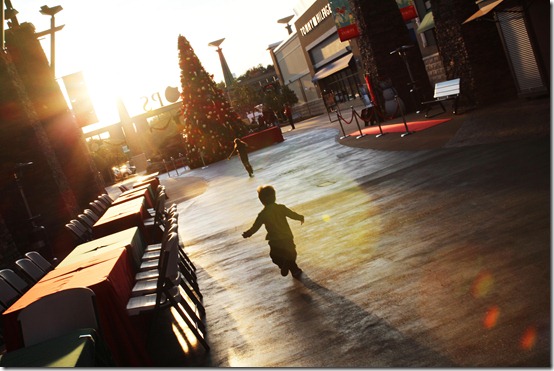 The cheery corridors in the night air actually put me in the mood to do some Christmas shopping – which is quite supernatural. 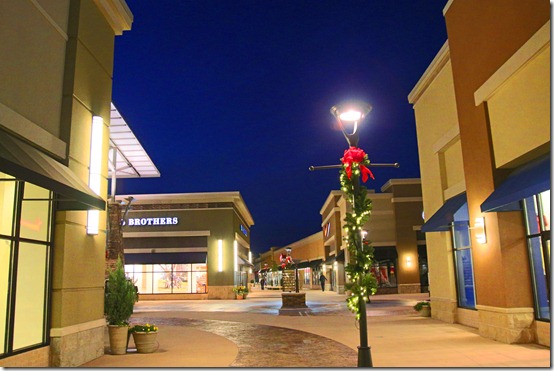 (Not that the kids let me shop that night, but you’ve got to start somewhere.) 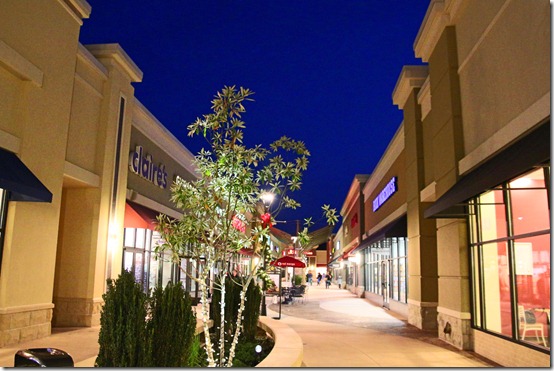 But now I know: sneaking out after the kid’s bedtime might just be my ideal shopping experience.

So.  The Giveaway you’ve all been waiting for.

For extra entries, you may do one or all of the following:

Be sure to leave separate comments for each of your entries!  This giveaway will be open until Wednesday, December 5.  I will announce the winner Thursday, December 6 on my Giveaway Winners Page.

Best of luck, and happy shopping!

Disclosure: I was recently thrilled to have the opportunity to partner with Grand River to create a Blogger Event at the Outlet Mall – something I’ve wanted to do for two years.  I was also given a $50 gift card at that event.  However, considering the fact that I begged them to let me bring a bunch of bloggers out there to show off what an awesome place it is, I assure you that all of my opinions are quite genuine. 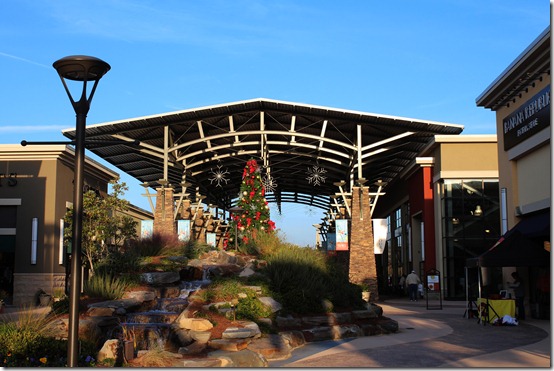