I promised a weekly-ish homeschooling post for a while-ish.

(Last week was my off week, so it doesn’t count.)

This week, I decided to share a typical fail.  Because fails are just as common as successes, and I don’t want anyone thinking otherwise.

My dear sweet husband bought a used Little Tykes slide and car for Noah from our dear sweet friend Nikki.  He went and picked them up, cleaned them, and took the kids to a nearby flat parking lot for Noah’s first car ride.

He took Ali’s bike, and reported that he was able to almost entirely pay attention to ensuring that Ali didn’t didn’t go down in a fiery crash because Noah was completely content to play in, out, on, and around his car on his own.

Chris even embraced his Blogger-Husband Spirit and wrote a meme from their experience. 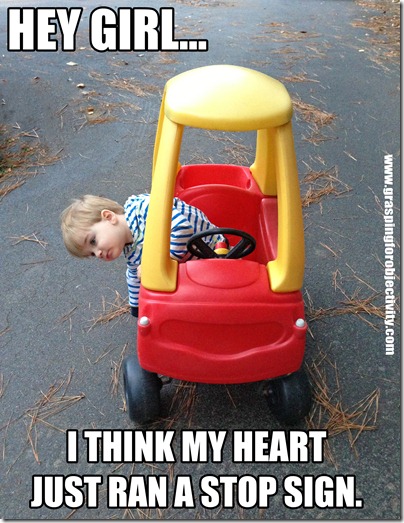 The next morning was the first time that Noah noticed the new slide, as Chris had left it in the part of the yard visible from the Dining Room. 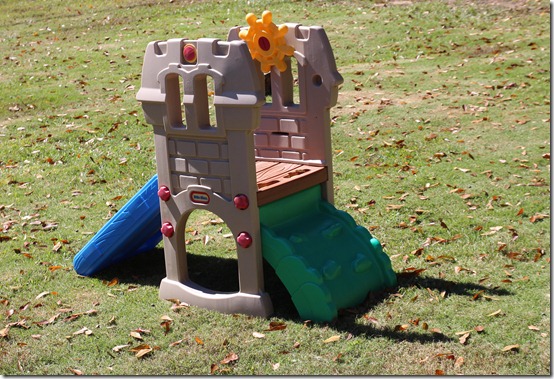 This would be great, except that the Dining Room is also the school room, and we couldn’t exactly quit school when he noticed it to go out and play.

Which resulted in this text to Chris. 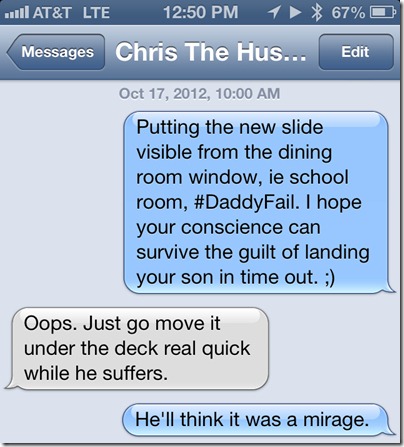 After a few minutes of alone time, Noah was happy again and we’d gotten a little more school done, so I went and sprung him.

Of course, I hadn’t taken the time to follow Chris’ instructions, so naturally, Noah went right back to the window, and in his baby voice, pled to be allowed to have a little fun in his life.

In an act of optimism, I decided to move the schoolroom outside.

After all, Chris said Noah was completely independently content the day before…and he loves to be outside.  Surely he’d shut up and let us get something done.

I gathered our books, a couple of chairs, got everyone’s shoes on, made myself presentable to be outdoors (translation: adding the proper undergarment beneath my ratty t-shirt), and we headed out, full of positivity and hope.

I suspected that Ali might be jealous of Noah getting to play, but she was oddly undeterred by the unfairness of it all.

What I was not expecting was for Noah, my normally bubbly and cheery toddler, to be a miserable wreck. 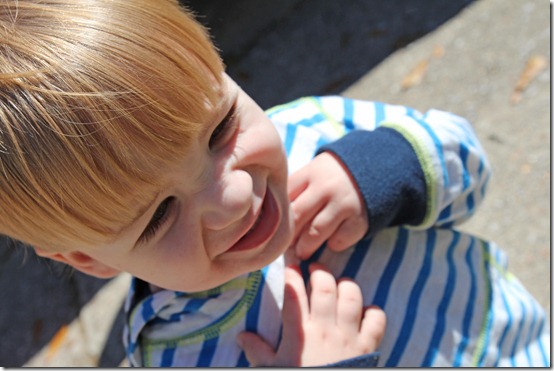 I set him in the yard, told him to have fun, and got Ali started on reading.

He climbed up onto the slide and took two trips down. 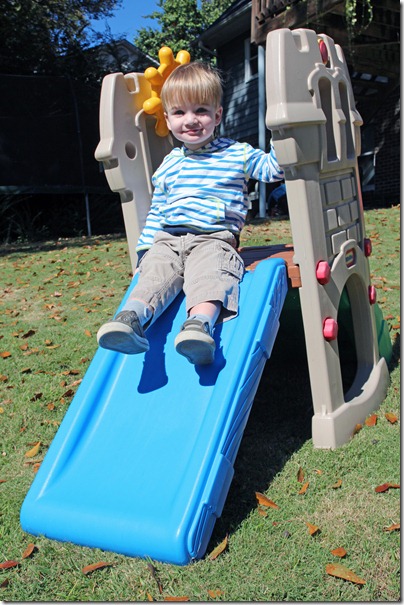 But something about that tiny slide’s dynamics and our yard’s downhill slope actually went faster than the extremely tall metal one he’d been using independently the weekend before at a playground, and after the second time of landing hard on his butt, he decided it wasn’t for him.

I moved on to Phase Two: I got his car out, which had as of yet been unrevealed.  Surely this would seal the deal of awesomeness for playing in the yard.

I put it on the driveway, and told him to have fun.

He was happy.  We could focus, still trying to read page one of Ali’s book.

We made it halfway down page one.

Then resumed the whining. 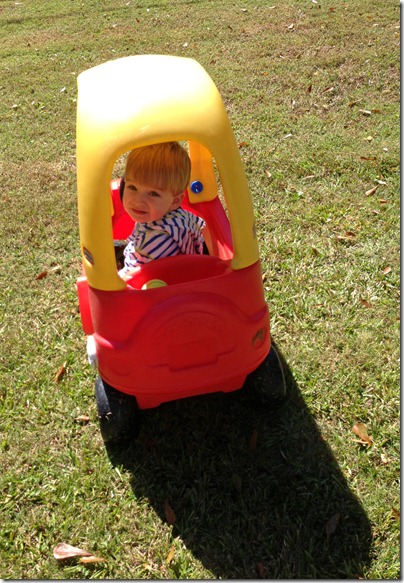 I looked at the car.  He looked fine.

“Is your shoe stuck?”

Finally I got up and went over to check out the nature of his malfunction.

His foot wasn’t stuck.  I didn’t see anything wrong.

Until I saw them, that is.

He had managed to park his car right on top of the one thriving ant bed in our backyard, and they were crawling all over the back of the car.

I yanked him out of the car, rolled the car down the hill to knock the unwelcome guests off, and turned around to grab him.

But he was gone, running all over the yard, yelling.

Great.  I finally got a copycat kid.

I set off after him, but he zigzagged around me.

Finally, I got close enough.  I yanked him up, pulled his socks and shoes off, then ripped his pants from his legs.

Sure enough, three fresh ant bites, red and swelling on his leg.

I turned his pants inside out to check for the vicious creatures.  He took off again, this time shoeless and mostly naked.

I gathered up his clothing, caught him, redressed him, and set him free.

And then tried to peel Ali out of her brother’s car and refocus.  On to page two of reading. 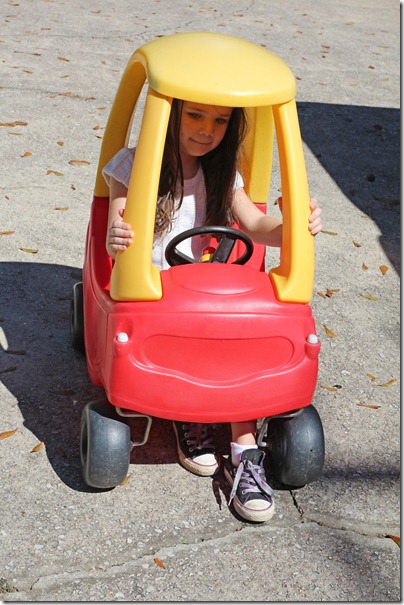 Meanwhile, Noah continued to fuss about all of his boundless outdoor playing options, and ending it all with a glorious crash into The Bunny Patch. 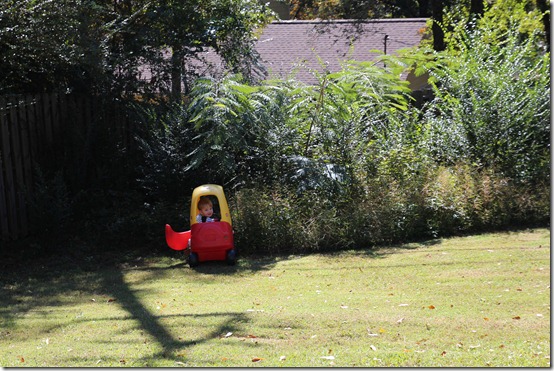 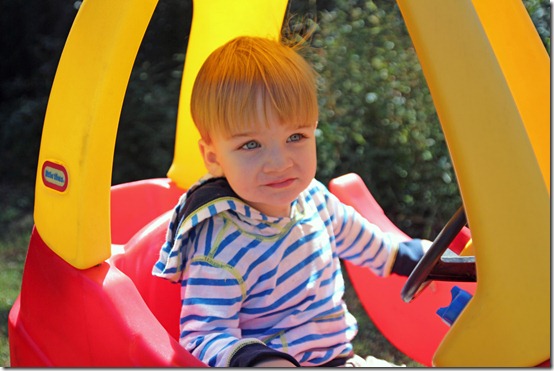 The morning resulted in very little productivity, except for another text to Chris. 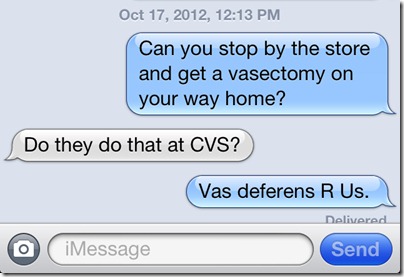 14 thoughts on “The Day Little Tykes Failed Me.”