So I don’t usually do two giveaways in a row, but I need you to understand.

I HAVE TO DO A GIVEAWAY TODAY.

For the ongoing health of my mind, body, and even my soul.  I NEED to give you something.

You see, I got a new camera

, and even a big girl lens

.  This is all ultimately my Dad’s fault because he wanted my help choosing a camera that he could buy for my Mom for their 40th anniversary and I was all like, “Hey! I can sell you mine for cheaper than you can get a lower quality camera, and then I can get a new one and they have this new really awesome camera out and I’m kinda drooling over it and…”

So Dad liked this idea.

So I started shopping.

But the problem was, the camera I wanted was new – like, it had just been released the week before.  And I can’t stand the thought of paying full-price for anything – at least throw me a rebate bone or something! So I began shopping our local stores, Amazon, Adorama, and all the other places I could think of.

Or maybe Amazon will come out with one of their specials…

The weeks of August slipped by without finding any such thing.

Mom and Dad’s trip loomed ahead of me.  They HAD to have the camera before their grand adventure!

So finally, I caved.

My camera was NOT going to go on sale.

…but on Amazon, the lens I wanted had a $100 rebate,  AND there was this super-duper Canon photo printer

came with it for free.

So I bit.  I bought the camera, the lens, the printer, and the paper.  And began psyching myself up for filling out two rebate forms PERFECTLY because they were worth $500 and I wouldn’t have them denying me my hard-earned cash.

The camera and lens came in quickly, and I enjoyed playing with them.  I delivered my old camera to my parents in the nick of time, and all was well.

But first, a bit more history.  In general, I have been a bit more emotionally unstable than usual.

A lot of stuff happened in the month of August, and it seems to have worn down my capability to handle life, even after receiving REALLY good news.

(The REALLY good news being that all of my Dad’s tests checking for metastasizing came back clear!)

But I’m still a bit on edge, and easily pushed back into levels of great anxiety over things that are not worthy of anxiety.

So, with that in mind, I had also not slept well Sunday, Monday, or Tuesday night.

So came an exhausted Wednesday, and a series of minor events, emails, problems, and little things began to pile up.  I was feeling overwhelmed and stressed about everything, and then the UPS man came.

And with him, the most inordinately enormous printer box I’d ever seen.

No – I mean really – this thing wouldn’t fit through my front door, let alone the gates of hell.

Now.  My office looks like a hoarder’s living room on a good day – between working from home, blogging, homeschooling, and running our entire life from my office, a lot happens in there.  And occasionally, the messes start to wear on my psyche.  Wednesday had been one of those days.

When I saw that ridiculously sized printer box, I began to get the vapors.

“Where am I going to PUT that?? I already have two printers – why did I order that?? This is SO not worth getting $50 back.  Oh my goodness oh my goodness….”

Then I began deep breathing.

I opened the box.

It had not settled in shipping.

I sped up my breathing to keep from fainting.

In a completely illogical manic state of anxiety and hysteria, I began feverishly reorganizing my office.

Chris came home during this and saw my dilated pupils and shallow breathing.

“It’s the printer.  It’s huge.  I don’t need it.  I shouldn’t have gotten it.  I don’t know what I was thinking.  I want to live simpler.  I hate it.  But I’ve got to get it put together so I can quit thinking about it.”

I cleaned off the longest filing cabinet in my office.  I headed back to the box and began pulling the printer out.  I about fell over, which would have resulted in the crushing of my chest by the evil titan-sized printer. 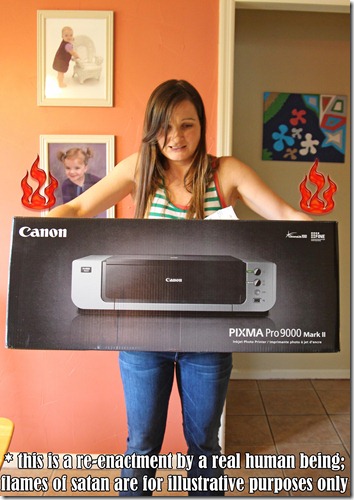 Chris came running in the room.

He held down the box as I lifted it out, and I pushed past him to get it into my office and in place as quickly as possible, hoping to assuage my extreme anxiety.

I put it on the cabinet and it fit perfectly.  And by perfectly, I mean barely not falling off of both ends at once.

I read the box.

I had to install the software on my computer and try it out to make sure it worked so that I could remove it’s proof of purchase and immediately fill out the rebate form and finish this ridiculous process.

The install went smoothly, until it said,

“Now connect the printer to the computer with a USB cable.”

The last printer I bought (aka received free with a rebate) works on wi-fi.  I assumed that this printer would do the same, seeing as how it’s newer and expensiver and sinfully huger.

And I had placed it all the way across my office.  And they didn’t send a USB cable.  And I didn’t have one without unplugging something else.  And certainly not one that would be long enough.

At that point, my breathing reached new high levels of speed.  I ran out of my office and Chris caught me, as I tried to explain between breaths the latest cataclysm of debacle.

Ali, who had recently come downstairs for dinner and had been watching all of this, asked,

“Mommy, can I have a roll with my dinner?”

And I ran out of the kitchen and into the living room.

Chris followed me, and watched as I had my first ever panic attack.

I managed to get out, “I need to call Mom and ask if she’ll take the printer.  She prints pictures.  Surely she’ll take it.”

“Go upstairs and close the door.  I’ll take care of the kid’s dinner and bedtime.”

At that moment, I heard Noah rounding the corner.

I was praying that Chris would CALL MY MOM RIGHT THEN and get her to come pick up that printer BEFORE I CAME BACK DOWNSTAIRS.

No but really…I was praying and I got my anxiety under control enough that I was able to laugh at the ridiculousness of it…by the next afternoon.

But I still called my Mom.  And begged her to take the printer.  And she said she’d talk to my Dad.  And he said no.

Which means that I still have The Printer From The Underworld.

That makes me very unhappy.

And I can only hope that one of you out there could be made happy by this printer…surely.

If you want this printer, tell me HOW this printer will NOT stress you out and will actually make your life better.  I’ll randomly pick one of you sometime next week and ship it to you.

(Without the Proof of Purchase, obviously.  I WILL GET MY REBATE IF IT KILLS ME.)

And, if the paper comes in time, I’ll ship it too, because you might be the Louvre and need to print monstrous photos to hang in your Grand Ballroom or something.

Oh – and if you don’t want the printer, feel free to comment, too – just make it clear that you don’t want me to send you my problems printer.  And please assure me that you, too, have had a panic attack over something as moronic as a printer.

125 thoughts on “A Technological Breakdown.”