The Sunday before last was my week to work in the nursery at Church.  I work in Noah’s room, which consists of toddlers between one and two years old.

I love that age.

(Assuming that no one is in a screaming mood that day, anyway.)

As it was a very crowded day in the nursery and the other worker apparently had an emergency and couldn’t make it, Chris came to help me.

…Or at least he did after he received multiple texts that were written in a tone of voice that one would naturally use to type over the sound of nearly a dozen one year olds. 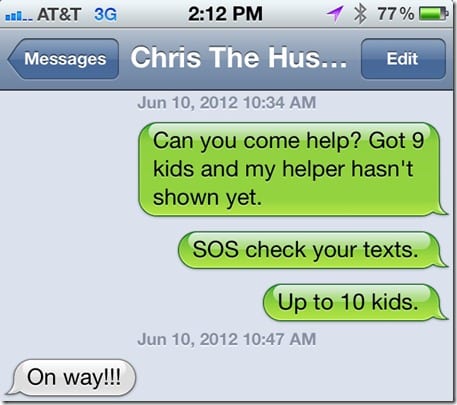 As you can see there, thirteen minutes had passed before he responded to my pleas.

Here’s what happened, according to him:

After Sunday School,  I stayed behind to talk to a couple of the guys.

Since you were in the nursery,  I thought to myself, “I’m going to score some brownie points and go up in a few minutes and see if she needs any help!”

I got into a long discussion, and I felt my phone vibrate in my pocket.

A couple of minutes later it went off again. (Oh, that’s just the repeat buzz when you don’t answer it.)

Clearly, my opportunity to score brownie points was long gone.  Now was the time for damage control.

Chris arrived and we set to work.

Reading books, breaking up fights, preventing the intermixing of slobber, and we even managed to pull off snack time.  With ten kids.  All sitting still at once.  Eating only their own crackers and drinking out of only their own sippy cups. 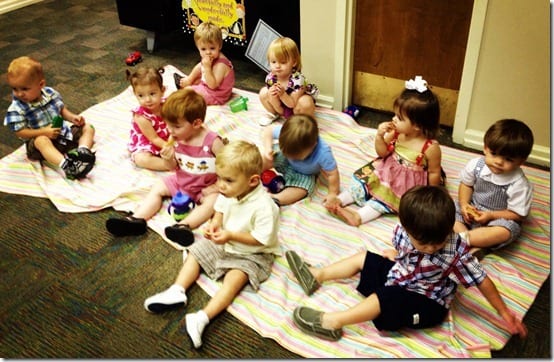 We thought we were on a roll, and beyond a doubt deserved a Nursery Worker Of The Year Award.

Toward the end of the service, the prisoners began developing restless spirits.  After I told Chris to quit making fun of the children in his syrupy sing-song voice,

(“Your Mommy’s never going to come for you if you keep screaming like that.  The louder you scream, the longer she’ll stay away, kiddo!”)

he developed another strategy and started a rousing game of airplane.

Sure enough, within two minute’s time, all of the criers had dried up and were zooming around in a line behind Chris, arms out, “vroom”s at full blast.

We dumped the last tired, grumpy, hungry kid off on their parents, and sighed the most colossal joint sigh that the world has ever heard.

He had a general air of malaise and wasn’t his happy self.  I chalked it up to his usual bi-monthly dose of fever virus, and prepared myself for his hobby of not sleeping when he has a fever.

He stayed true to form and opted not to sleep.

And also, not to eat, drink, smile, or be further than one foot away from me at all times. 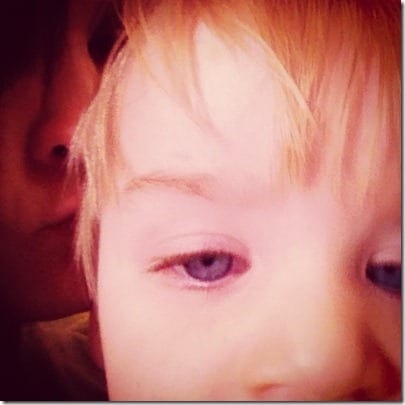 I muddled through Wednesday’s chaos of taking Chris to work, getting Ali to VBS, preparing for out of town company, and trying to keep Noah as comfortable as possible.  By bedtime, despite constant medication, his fever had shot up to 103.7.

Thursday, Noah arrived on the scene ten times worse.  Screaming when I tried to give him Tylenol, refusing food and drink, and moaning nonstop, all day.

By Thursday afternoon, I had fought off my usual fears of being the HypochondriParent, decided that this was much worse than a fever virus, and sped Noah to the doctor.

While I was there, I got an email from another mother from Church, asking for prayers for her twin boys that are Noah’s age, because they had a terrible fever virus.

Twin boys who were with us on Sunday.

I emailed her back, told her that Noah had it too, and I would let her know very soon what it was.

The doctor came in, asked a couple of questions, looked between Noah’s toes, then between his fingers.

“This is the moment of truth.  Hold his arms down.”

He peeked in Noah’s mouth for a millisecond, and pronounced, “Yes, it’s exactly what I thought it was.  His mouth and throat are full of ulcers.  He has Hand, Foot and Mouth Disease.”

Due to my own lifelong experience with the insufferable pain of mouth ulcers,  I was immediately brokenhearted for my poor child.  No WONDER he wouldn’t eat or drink or even take medicine.

I called my friend.  She confirmed that her boys refused medicine as well, and that she was sure they had it.  I passed on all of the tips that my doctor gave me.

By the next day, I’d heard that at least six out of those ten kids had clear cases of Hand, Foot, and Mouth, that two more were mildly sick, as of yet undiagnosed.  That left only two, and I just didn’t know about them because I hadn’t heard anything or talked to their parents.

I could literally feel the Nursery Worker of the Year Award being yanked out of our unfit hands, thanks to us somehow allowing our ten little toddling Petri Dishes to soak up some especially potent germs into their sticky, moist, germhouses.

On our watch, at least 80% of our occupants ended up sick.  60% with the worst sickness that I have ever seen one of my children encounter.

I did some research, and found out that there is an extremely horrible strand of Hand, Foot, and Mouth going around right now, especially in Alabama.  Not only is it worse, but it’s also much more contagious, infecting every kid that gets in the same county with it.

That made me feel a shred better.

We had done everything we could have done, but that virus was quite determined.

Noah was unbelievably miserable all of Thursday and Friday, and although he still wasn’t eating much, started a very gradual journey to health on Saturday and Sunday.

So.  Just in case any of you experience this nasty strain of hell, here’s what we learned:

I really hope that none of you need ever that advice, but if you ever do, there you go.

And if you hear a rumor that we got fired  from the nursery, now you know why.

45 thoughts on “When Viruses Go Viral.”