Two days after Noah recovered from Hand, Foot, and Mouth Disease, he managed to come down with Croup.

Considering that we hadn’t been anywhere for what had to have been centuries due to his ailing condition, I have no idea how he got sick again.

But sick he was.

(He is completely better at this lovely moment.  Here’s to hoping it lasts.)

As such, he was unfit for the nursery on Sunday, again.  So while Ali was having the time of her life riding to Church in Daddy’s fancy car and – oh – stopping for Krispy Kreme on the way, I decided to give Noah the consolation prize of a one-on-one trip with Mommy to the zoo.

(I know. Germs.  I promise that I kept him confined in his stroller almost the entire time, and when I freed him, I ensured that he stayed far, far away from other children.)

Plus, his current favorite activity (aside from GETTING SICK) is reading from his animal book and making all of their sounds, so I thought that I would get an outstanding quantity of baby brownie points for this activity.

He clung to me as we passed harmless sheep and tiny baby goats…and made sure to keep his grasp firmly on the stroller when we happened upon a loose Killer Rooster. 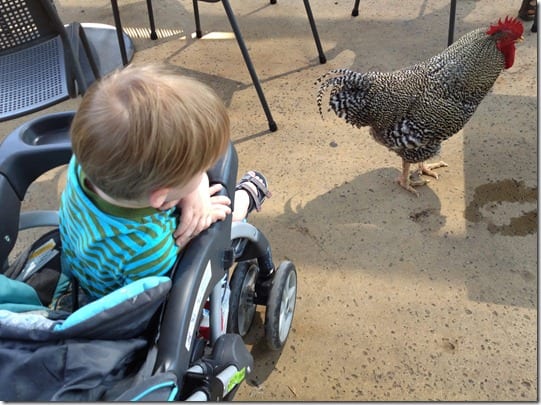 But I’ve always had a fascination with the Llama, so I made him get out of his stroller to meet Mister Double L. 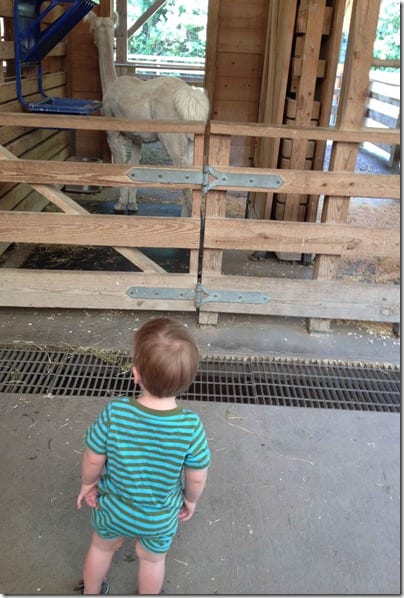 My feelings for this Llama are quite undeserved, as he is the same Llama that ate Ali’s shirt four years ago, therefore instilling in her a long-standing fear for all things large and fuzzy.

Yet I am still magnetized to him with an inexplicable passion comprised of 50% hatred, 50% fascination.

So while Noah maintained a white-knuckled death-grip on my hair, I held him up to see the Llama.

The Llama ignored us and kept eating.

I leaned far over the fence and petted the Llama’s back.

Llama grunted.  Noah whined with fear while ripping chunks of hair out of my follicles.

I leaned and petted him again.

The Llama buried his head deeper in his hay, filling his cheeks with an enormous mouthful of straw.

He chewed it for a half a second, then calmly yet intentionally looked directly at me and simultaneously hocked, belched, and projectile vomited directly at my head.

Then indifferently looked down and went back to eating.

I stood there, careful not to open my mouth until I had assessed the damage and location of all Llama Sputum.

I sat the completely un-spat-upon Noah on the ground (Apparently our Llama has the aim and accuracy of a sniper) and reached into my hair, where my hand sank into a giant gooey conglomeration of saliva, Llama bile, and sharp bits of hay.

I panickingly dug around and found Noah’s wet wipes and began to furiously wash my hair.

Noah watched my vain efforts with a look that said it all. 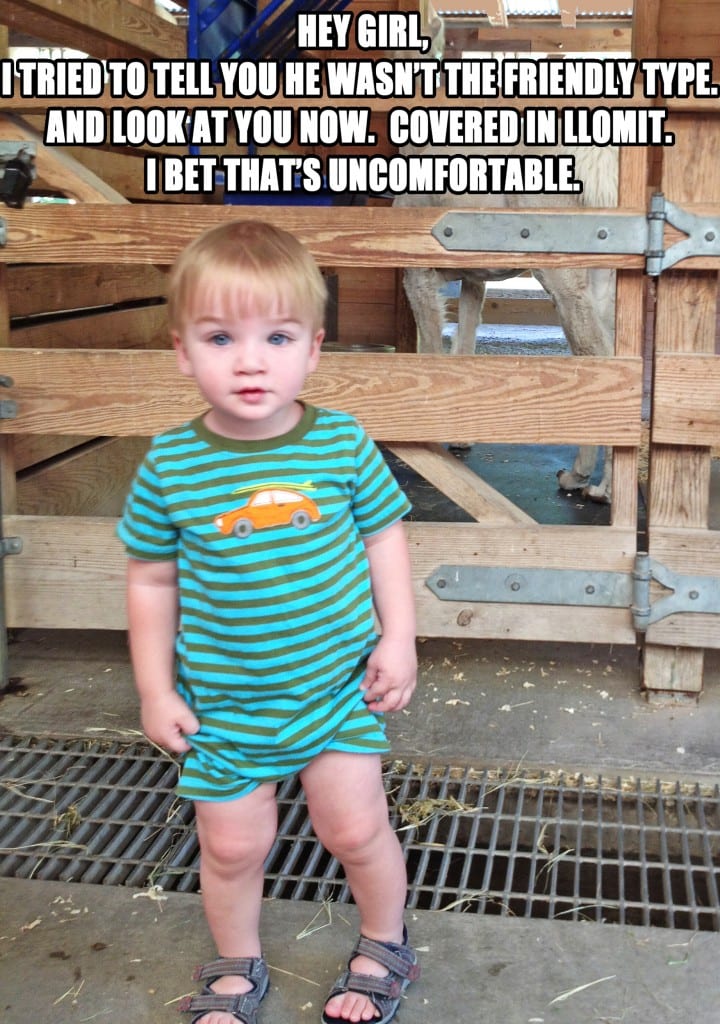 After I removed the largest chunks, I set off to find the Purell. 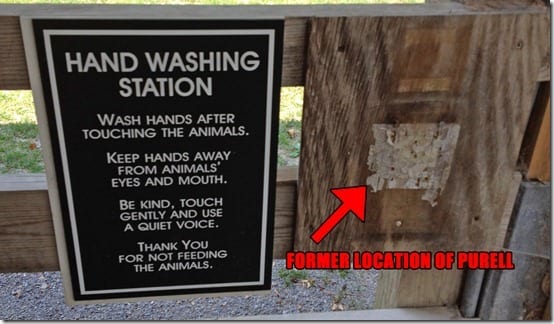 Awesome.  There just happened to have been a Purell thief right outside the Llama exhibit?!?

I glared at him suspiciously, knowing exactly who was hateful enough to steal disinfectant.

He munched away with a gleeful smile hidden under his long, innocent-looking Llama eyelashes.

31 thoughts on “Never Trust a Llama.”