Wednesday night on Twitter, I broke my silence about this deeply painful issue when I told my friend Trina all about my shame and sorrow.  So I decided that since it was already out there, I might as well admit it here.

So one must ask, how did it come to this?

First, I’ll explain how I came to realize I’d been blocked, because it’s not as if Twitter sends you a weekly update of all of the people who have chosen to despise you.  These things must be found out the hard way.

Last year, I wrote a blog post called Baby V. Food.  I was pretty darn proud of our creation – it was Chris’ idea, and his ideas always turn into the best posts.

Chris and I committed fully to the post, and went to a lot of trouble to get it perfect.

We watched Man V. Food several times (which is mighty sacrificial for me, as I’m not a fan of watching other people eat to the brink of vomiting) and took copious notes, writing down all of Adam Richman’s idiosyncrasies, catchphrases, scene set-ups, and even facial expressions.  I took hundreds of photos of Noah, and I did a bang-up Photoshop job on the title, not to mention the microphones at the end.

When I went to tweet about my post, I mentioned Adam’s Twitter handle in my tweet so that he might see it – I mean surely he would appreciate such a finely crafted parody of his show, even if he couldn’t appreciate the Cute Baby Factor.  Right?

I tried again – no luck.

I checked my character count – it was under 140.

So I went to Adam’s Twitter page – it showed that I wasn’t following him.  That shouldn’t cause my problem, but I clicked follow just to see what would happen.

At which time Twitter sent me this shocking note:

Adam Richman is…. BLOCKING ME???

What did I ever do to him??

I sat there, stunned and perplexed, wondering to myself how I’d managed to offend a man that could easily eat me without even unlatching his Manaconda hinged jaw. 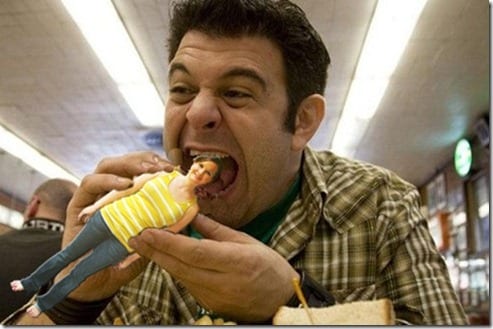 And then I remembered.

A year or two before, I had tweeted a one-liner joke about him.  I don’t even remember it, but I do remember that I did not include his Twitter Handle in the joke.  I’d just said “Adam Richman”.

However, he apparently has quite the gaggle of adoring groupies who find men that regularly eat five pounds of greasy food in under thirty minutes quite hot.  These devoted ladies also have Twitter searches set up so that they can know every single time his name is mentioned in the Twitterverse.

They didn’t appreciate my joke.

They immediately started attacking me, throwing nasty tweets faster than Adam can gulp down a 96-ounce Cheddar Cheese Milkshake.  And in their TweetGrenades, they made sure to include his Twitter handle – you know, because a man loves a woman who is a Twitter Tattletale.

I didn’t respond to them, but I deleted my tweet.

Okay, I’ll admit it – I do remember the basic idea of my joke, although I’ve forgotten the punchline – a shame, because I think it was good.  The joke was something along the lines of who would be the perfect replacement for Adam Richman when he had a heart attack.

So maybe I shouldn’t joke about someone having a heart attack.  But have you SEEN the man eat???

IF YOU EAT YOURSELF TO THE FOOD SWEATS ON A REGULAR BASIS SIMPLY FOR THE ENTERTAINMENT OF THE TELEVISION-WATCHING MASSES, YOU CAN’T GET OFFENDED WHEN PEOPLE JOKE ABOUT YOUR HEALTH.

So apparently, once all of his admirers began TweetBombing me but before I deleted it, he went back and read my tiny little tweet, and then decided I was such a despicable human being that I was worthy of being blocked. 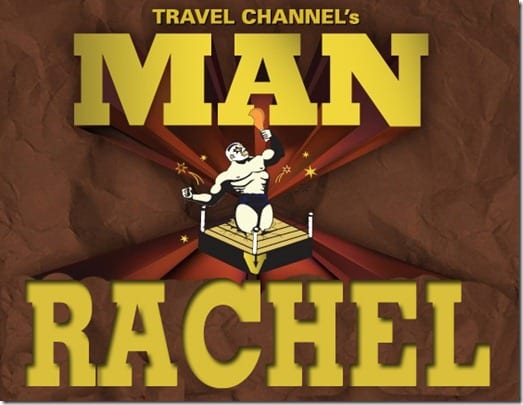 When I put all of the pieces together of how this blocking came to be, I actually did feel pretty awful.  I hate hurting anyone’s feelings, even a celebrity that makes my lifetime earnings by eating a pile of cheesy fries in the shape of Mount Vesuvius.

Then I sat in a puddle of moroseness and felt sorry for myself, thinking of the thousands of blog posts and ten thousand tweets that I’ve written and wondering how many hundreds of people that I had hurt or offended and had yet to discover it.

It totally ruined my post that had brought me such joy and pride.

Since that day, every time Chris has turned on Man V. Food, instead of making my former comments of…

“I really don’t want to watch him distend his stomach AGAIN”,

I get quiet and sorrowful, reminded of my despicable tweet, and say meekly,

“He hates me.  I don’t like watching this show.  It reminds me of what a bad person I am.”

But after tweeting the short version of this story Wednesday night, I realized something.

Adam Richman is a big, burly, tough dude that puts himself on television eating monstrous amounts of food (or used to, anyway) and I am an infinitely-uncelebrity Mommy Blogger in Birmingham, Alabama who made one tiny 140 character joke.  A joke ten times less insulting than anything that Leno, Letterman, or Conan has ever said about Mr. Richman – and they’ve all said plenty.

But I was apparently so offensive that he had to block me over it?

And now I want to know: has he blocked Leno, Letterman and Conan?

Because if he hasn’t, I’m calling foul.  I’ve been discriminated against.

WE DESERVE EQUALITY IN JOKE-MAKING RIGHTS!

(But please feel free to chime in and let me know that you don’t hate me.  Until you do, I’ll be in a ball over there in the corner, worrying about every word I’ve ever typed.)

47 thoughts on “How It Feels to be Hated By a Celebrity.”