If I were the Al Gore type, I would definitely proclaim that Chris and I discovered text messaging.  Because I kinda feel like we did.

We were dating, I had just started college, and Chris was in college and working full-time.  We didn’t have a lot of extra time for chatting sweet nothings, but we both had pagers.

(I think they had just gone from being referred to as “beepers” to “pagers”, if that helps with understanding the times any better.)

(And we did also have cell phones, but I had the 100 minutes a month plan, so I knew that I could talk 3.33 minutes per day to avoid having to pay my college tuition over again in overage charges.)

So we used our pagers to their fullest potential.  We would send each other a bunch of numbers, like this set…

…and then would spend the time we should have been listening to our college professors consulting our cell phone keypads to decode each other’s super cheez-fest sappy-sweet messages. 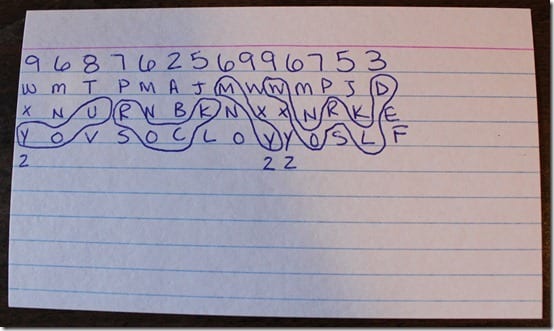 Behold.  The dawn of the text.

A couple of years later, now newlyweds, we had new-fangled Nokias (with the super-granulated black and white screens), and we found a weird little feature hidden deep in the voicemail section of said phones.

“Hey babe – what do you think this does?”

I painstakingly typed out a message, hitting each number button multiple times to choose my letters…

A second later, Chris’ phone chirped with a sound we’d never had before.

We looked at each other in awe and wonder.

“This is so much easier than using our pagers!!!”

And we were hooked.

Our friends made fun of our geeky form of communication.

“That is the stupidest feature I’ve ever seen on a phone.”

Our family wondered what we were doing, incessantly punching our number pads like idiots.

“Wouldn’t it be easier to just call him?”

And I remember one pivotal moment in the history of texting when we taught my boss, the owner of a telephone company, how to text.

At least he appreciated the potential.

Of course, you know the rest of the story.  Chris and I singlehandedly taught the world how to text, and now every car accident is blamed on them and all of the tweens of the world don’t know how to communicate face-to-face because all they ever do is text, blah blah blah.

But texting has always been, and continues to be, a very valuable part of our marriage.

Not only has it allowed us to stay in cheezaliciously romantic contact throughout the day, but it has created the opportunity for a very important marital tool:

There have been so many times that we’ve had the opportunity to be irritated with each other, creating a downhill emotional spiral.  But because we were texting instead of talking, the emotions could be separated.

(Sure, I can text emotions, but by the time I’ve typed “WHAT WERE YOU THINKING!?!?!”, I realize how harsh I’m being and erase it all.  Unfortunately, my verbal filter doesn’t work this efficiently, hence my love of text.)

Last Friday morning was a perfect example of such an event.

The kids and I  were planning on going to an Easter Egg Hunt and Picnic at the park with some friends.  I started getting everyone ready 30 minutes earlier than I needed to, but yet, the chaos devoured those thirty minutes and made every step of preparation intensely difficult.

…Noah was angry and teething and wanted to be held the entire time.

…And if I wasn’t holding him, then he was punishing me by getting into cabinets and throwing everything out.

…And when he finished getting into the cabinets that weren’t child-proofed, he began prying at the ones that were and getting his arm stuck, then angrily complaining about the state of his life.

…Ali wanted to ask 568 questions about the Easter Egg Hunt.

It was just one of those mornings.  And all I could think about all morning was that there was no way I could ever handle this Mommy thing with more than two kids.  How do people do it?  They must be superheroes in disguise.  Yes, that’s it.

After an hour of bodyslamming wrestling us all into our clothes, I began our picnic preparations.

(Have I ever mentioned that I hate picnics?  I’ve decided that I don’t believe in them.  Packing for them is too impossibly complicated.)

The child-created chaos only heightened.

I’m. Losing. My. Mind.  There’s no way I could ever handle this with more than two kids.  How does anyone do it?  Oh yeah – they’re superheroes in disguise.

Finally, I finished our picnic preparations and we headed downstairs.

At which point I discovered that Ali’s booster seat was not in my car.

Chris had taken the kids out the night before while I was gone to a baby shower, and I couldn’t find where he’d left her seat anywhere.

So I texted Chris again.

What you can’t see in that message is that my head was exploding.

(Okay, you might can sense it a little bit but it would have been EXTREEEEMELY apparent if this conversation had been verbal.)

If we weren’t texters and I’d had to call Chris in attempts to locate Ali’s chair, there is absolutely no way that I could have not let my temporary feelings show through my tone.

And then he would have gotten defensive.  Or more likely (and worse), overly angry at himself and then insistent that he fix the situation.

Then I would have gotten angry because we were already running late and I didn’t have time for him to fix it.

Then he would have gotten angry and….you see where this is going.

Emotional meltdown for all involved.

But instead, I breathed deeply.  I remembered that there are much worse things in life than a chaotic morning and missing booster seat.  I took a minute to be grateful that Chris had taken the kids out to dinner the night before by himself so that I could go to a baby shower.  I solved my problem, we moved on, the picnic was lovely, and I got over it.  Without ever having to transfer any of my unnecessary emotions to my husband.

A bit later, I was able to text him (quite genuinely) this reassurance:

And all was okay, thanks to texting, and it’s ability to separate emotions from communication.

Text Marriaging: we invented that, too.

Disclaimer: I am aware that Alabama law states the use of a booster seat until the age of six.  However, Ali is 5 1/2 and taller than most six year olds, my CD case was nearly the same height as her booster seat, and I was desperate.  Don’t hate.  Or call CrimeStoppers.