Naturally, a lot of our life revolves around Noah right now.

His often and stringent nap schedule,

His need for food,

His obsession with putting everything in his mouth and therefore preventing his sister from freely playing with all of her favorite little things,

Due to this unbalanced state of our household, Chris and I felt like we should take Ali out on a special date, sans baby brother, and lavish some two-on-one attention upon her.

And, since she inherited her father’s gene of loving anything  that can be dipped (she has been known to gleefully dip watermelon in honey mustard sauce), we decided to treat her to a super fancy fondue date at The Melting Pot.

So we let Ali dress up in her sparkliest fanciest outfit and dumped Noah at his Godparents’ house, where he provided the invaluable service of methodically showing them every single item they owned that was breakable, edible, annoyingly loud when banged upon other items, and otherwise un-babyproofed.

(He is opening his own business and will be offering this service to expecting parents and grandparents – $200 for 2 hours of babyproofing consulting.  Watch for his contact info on an infomercial near you.)

Back to the super special date.

About ten minutes after we left their house, Ali sighed loudly from the backseat.

We assured her that only she was mature and fancy enough for this sort of date (“Just like Fancy Nancy??”  “Yes, JUST like Fancy Nancy.”), and she perked up just fine when we arrived and introduced her to The Forks. 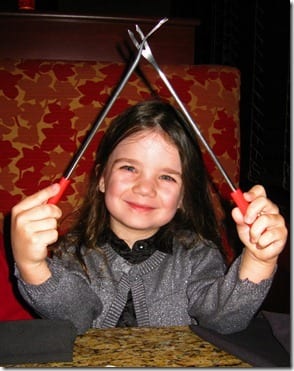 She was greatly anticipating Fancy Dip-Dip, but Chris might have been a tad bit more excited. 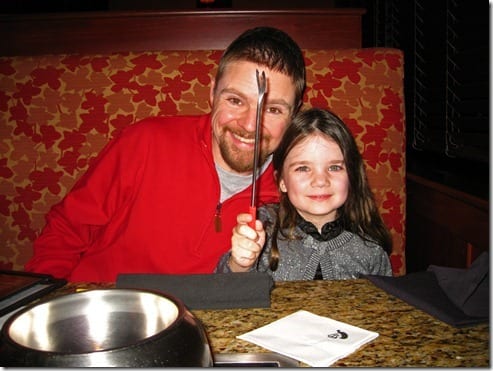 The cheese arrived, along with it’s bread, veggies, and apples to dip in it.

We told Ali that it was going to be the best Cheesy Dip-Dip of her life.

She watched our waitress mix it, stir it, and melt it with intense excitement.

And then we dipped.

She took a bite, and immediately declared that she didn’t like the cheese at all, but that she would be willing to eat the apples and bread, just no cheese please.

We gladly ate her portion of cheese while she was much more interested in playing with the blinds than the amazing feast of awesome that was in front of her. 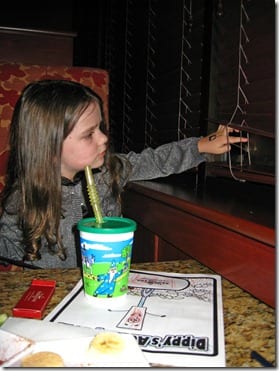 So, we failed on the cheese.  But we were okay, because we knew that it would be breaking multiple Universal Laws of Physics for her to not adore the Chocolate Dip-Dip.

So we licked our wounds and began hyping dessert.

“They’re going to bring brownies and cake and marshmallows and fruit … all to dip in CHOCOLATE!!!”

We got the Yin Yang, which is half dark chocolate, half white chocolate.

She tried the dark first… 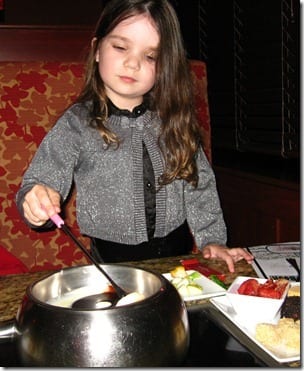 while Chris looked on with a bit of drool on his lip. 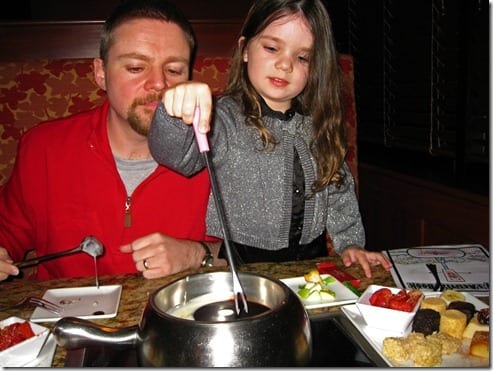 Then she dipped something in the White Chocolate.

“I like the vanilla better…but I think I would just rather eat the strawberries with no dip on them at all.”

And so she proceeded to do just that.

In summary, Ali’s favorite parts of going to The Melting Pot were: 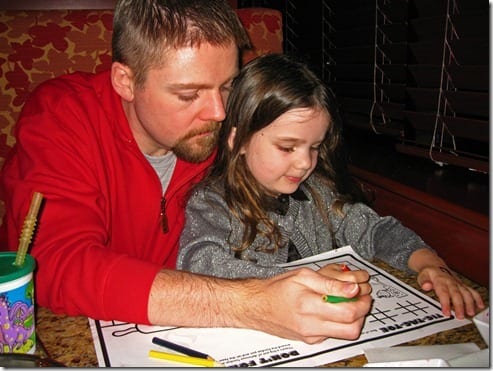 Next time we feel the need to lavish special attention upon our daughter, we will spend significantly less money in our efforts.

…then again, splitting cheese and chocolate for three between two isn’t such a bad deal.