…doesn’t mean they’re not really out to get you.

Or at least that’s what my Dad used to tease me with during the days of my overly-suspicious youth.

I received a text last night.

It was from a number I’d never seen before, out of state, and all it said was,

“Parent of the year award goes to you!! DCS will be visiting later tonight!!”

Was this some sort of threat? And why?

Then I remembered: I had posted my Baby Tips post that morning. Surely I didn’t have some wacko person that found my post and actually took me seriously, thought the photos endangered my child, and called DCS.

Then some of the things that have happened in the past began flooding into my mind.

(I am, apparently, easily misunderstood when taken out of context.)

I started shaking. Not because I was scared of DCS (I was thinking it was more of an empty threat to scare me), but because I was upset that someone would think I was being careless with my children..and also, how could they have found my cell phone number?!?

Chris came in the room. I told him what had happened and showed him the text. “Are you sure someone isn’t just joking with you? Some people have weird senses of humor.”

“If it had come from a number I knew, sure – but not from an out-of-state one. That’s not in the least bit funny. Surely not.”

“True. But still…how did they get my cell phone number?? Nobody would go to that much trouble for a joke. Why wouldn’t they just send me a threatening email?”

I launched my investigation. I started by using reverse look-up on the phone number. $1.99? Sure, I’ll pay that.

No name – a cell phone from Lafayette, Louisiana.

I don’t know anyone in Lafayette, Louisiana.

Next step: I searched my entire blog’s stat logs for the day: had anyone been on my blog from Lafayette and read Baby Tips? If so, I’d have their IP address.

Nope… a few Louisiana visitors went to my Mom Jeans post, but that hardly warrants my arrest.

Third order of business: I went back and read my post.

Seriously?? There is nothing in there that anyone could take as even halfway dangerous. Not even the balloon shot.

But, stranger things have happened…

Chris suggested that I text them back, asking if they had the wrong number. “I’ve gotten lots of texts from wrong numbers before.”

“If you’re right and I’m wrong, then a text back would solve the problem. But if I’m right and it is an angry stalker of some sort, a text back will only fuel them to harass me further.”

I put my detective hat back on. I needed a name for these people. I searched the internet for a better reverse look-up. Found one – high ratings, looked legit – $4.99 for all the information you’d ever want on a person. I’ll take it.

I put the number in again. This time, it came back with a location of Sunset, Louisiana.

Wait a minute…one of my best friends (Lydia, incidentally from aforementioned Mom Jeans fame) is from Sunset, and still has family in Sunset…

…surely this wasn’t just a really bad joke…and from a FRIEND, too!!

The name came up.

Yup – that’s her sister all right.

All of a sudden, I found myself intensely irritated with my dear friend Lydia. She knows some of the cyberspace issues I’ve dealt with. She should know this was NOT funny.

And…seriously?? After reading my blog this morning, she had texted me the following baby tips addendum of her son:

Be sure your child always has the appropriate protective equipment on his head and knees and knows how to sit still and firmly hold the handlebars. Never be more than an arm’s reach away. 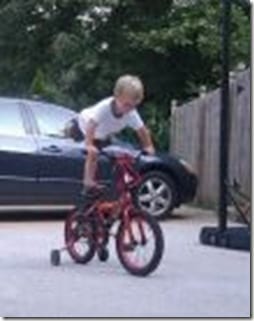 How were my pics worse than hers??

See if I try Mom Jeans on with HER ever again.

I tried calling her. She didn’t answer.

I text her. “Coming from a blogger that’s been harassed and threatened for real, not so funny. But I love you anyway. :)”

Five minutes later, I got a phone call.

“Hey! I was on a date with Chuck – sorry I missed your call.”

“Well, I got a text from her that I’m assuming you put her up to.”

“Oh! I got that text too. She was joking about my photo of Radford that I texted to you, her and Chuck. I guess she replied to all! Can you do that on a text message? Oh wait! Chuck’s getting it now too!”

…Apparently, people, you CAN “reply all” on a text message.

Return of love for Lydia.

…And a bit of amusement at myself.

“Well, tell your sister that I now know her name, address, and have her background check, if she needs it for anything.”

The moral of this story: always trust your husband. He made two suppositions, and both were right. Also? Don’t stalk me – or I’ll stalk you.

…but as I learned very early on in my childhood, just because you’re paranoid doesn’t mean they’re not really out to get you.

34 thoughts on “Just Because You’re Paranoid…”