The awesomely wonderful hubby is 35 today. 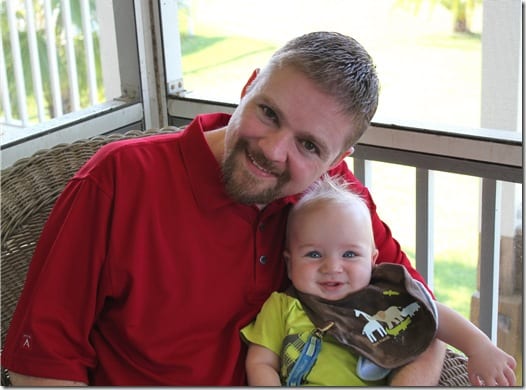 Yes, I’m keeping a close eye on him for any signs of milestone-birthday-crises… but luckily, since he married a (MUCH) younger woman, I’m not worried about being traded in for a newer model (how much newer could there be?!?) – I’m just keeping an eye out on our driveway to make sure his College Dream Car doesn’t mysteriously show up.

(A Mercedes SLK, circa late 90’s, silver, hard-top convertible, black leather interior, low mileage, driven by a grandmother to church and back for the last 15 years, preferably with the perfectly-sized-to-fit-in-the-trunk-with-the-hard-top-down luggage set included as an accessory.)

(And he needs this dream car because he actually has, in his possession, through an unbelievable twist of hand-me-down fate, the custom Mercedes branded infant seat that is pictured in his prized vintage SLK brochure.) 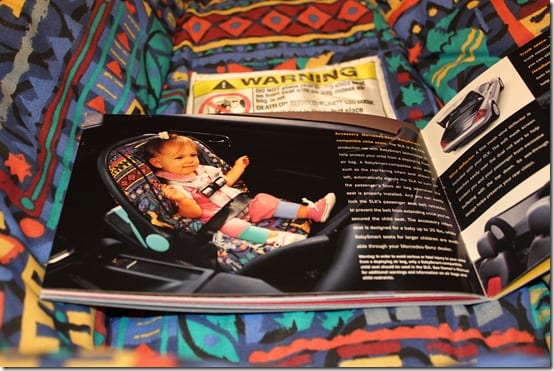 (He calls this fate.  I call this BabiesCan’tRideInTwoSeatConvertibles,Dummy.)

And the embarrassing situations I put him in.

And then the aftershock of humiliation when I blog about said moments.

And for that, he deserves untold amounts of accolades.

So in honor of his special day, I thought I’d rehash my favorite moment of wife-induced humiliation of the year…

Chris and I had the privilege of attending the Birmingham Restaurant Week Preview Party on Wednesday night.

It was quite the lavish occasion – I actually even had the thought that this was the first event I’d ever attended that my photo might end up in the “Social Scene” pages of one of our local magazines.

(And, of course, it would be when I was gargantuanly pregnant.)

At any rate, it gave me an excuse to wear my awesome sequined shirt (luckily it still fit nicely over my pregnant belly, although I didn’t get a picture of us, so it might not have fit as nicely as I imagined it did…and if it didn’t, I sure hope I don’t end up in the Social Scene Shots), but a lot of people decked out much fancier in their cocktail dresses.

There was much food, much mingling, many Birmingham Socialites, and a live band. As we were out on the patio drooling over all of our samples of delicious cuisine from all of our favorite restaurants, I was watching a table where there was a painting easel set up. I saw someone walk up to the canvas, add a few thoughtful brush strokes, and walk away. I remembered seeing someone do this out of the corner of my eye earlier.

“Oh look, honey! They’re doing one of those cool paintings where everyone puts their little touch on it, and by the end of the night, it’s a masterpiece!”

We were both intrigued.

When we finished our feasting, we walked over to the table. No one was there, so we quickly read the sign that said that the painting would be auctioned off after the event. There were two palettes full of colors sitting out, along with a bunch of paintbrushes…

So far, the painting was of a chef, all in white, with the exception of his polka-dotted scarf. It was already great, but definitely looked as-of-yet unfinished.

Being that Chris is the more artistic half of our family, I chided him to leave his mark.

“You should TOTALLY add something to it.”

And, being that Chris is Chris, he noticed the big blank chest of the Chef’s outfit, the large glob of red paint that was as yet untouched, and said that the Chef really looked like he wanted – nay NEEDED – a big Alabama A on his chest.

He pondered, he sized the chef up, he thought about his strategy for implementation.

And, as we were standing there analyzing, the lady that had been manning the table walked back up.

“Isn’t it beautiful? The artist is here tonight working on it. She’s amazing!! She’s doing it a little at a time throughout the evening, and at the end of the evening, it will be one of her valuable original works of art, and we’ll auction it off.”

We run wander off as quickly as possible….and as soon as we’re safely out of earshot, I burst into a fit of HorrifiedNervousRelief giggles.

Chris, although not laughing, was quickly turning an Alabama A shade of embarrassment-red.

“You just almost TOTALLY sold me down the river!!!!!”

“I know!! I can’t believe that…it would have been hysterical!!! I mean terrible!!!”

“Let’s never speak of this again.”

Sorry, babe – something tells me we may not get an invite for this year’s Restaurant Week Party.

…But I probably owe you an SLK for all the pain I put you through.

Happy Birthday, and thanks for your continuous endurance of me!!