When I was very young, there was a brick-paved street a couple of blocks from my house.  It was really just a brick intersection – a tiny slice of leftover history that somehow got missed by the modernization of Birmingham.  I loved when we drove over it and I had the opportunity to pretend that I was a 19th century Southern Belle in a horse drawn carriage, and my Mom or Dad was my personal driver.

Not too long into my childhood, modern progress won out, and they dug up the bricks and asphalted my favorite intersection.  The bricks were going to be thrown out, so my Dad went down to collect some of them.

He used those bricks to make steps and a walkway up to our house.  I remember asking him why he wanted to use the old, chipped and worn bricks instead of new, “pretty” bricks.  He showed me the stamping on the bricks:

The bricks were made right there in our town by a factory that was closed half a century before he was born.  He explained to me that these bricks were a part of our history – of our city’s story, and that by saving them, he had salvaged a bit of that history for our family.

Although I didn’t care too much about my city’s history at that point, I did look down and see those stamps of Birmingham’s past on a daily basis, and always remembered my cherished brick road because of their presence.

Now that I’m older and passionately in love with my city, I completely understand my Dad’s efforts to preserve our past.  I am fascinated with books showing pictures of how Birmingham used to be, and I confess I might still spend a bit of time still imagining that I was one of those ladies with the long, full dresses and dainty parasols being driven down the locally-made brick roads in a fancy new horseless carriage.

Yesterday, we spent a day of our vacation in Historical old St. Augustine, Florida – the oldest city in America.  The layers upon layers of different cultures and generations creates a beautiful canvas.  Centuries of buildings and churches line brick-paved alleyways, and remnants of pirate attacks, forts, and colonization are scattered throughout downtown.  Men dressed up as Pirates amble down the roads, scaring children and having witty remarks always at the ready.  It’s easy to imagine oneself in the past in St. Augustine.

Ali and I stopped to admire a 19th century water wheel at a former grist mill. 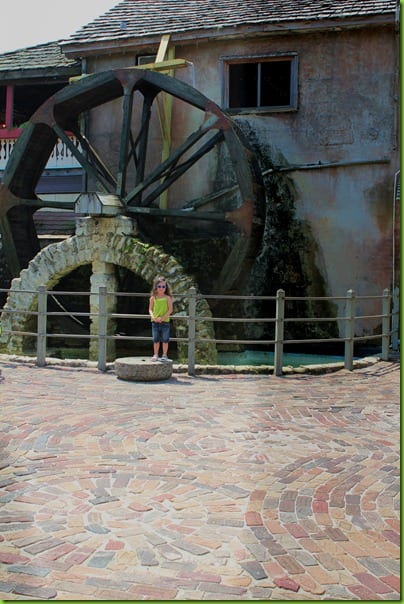 …Or at least I  was admiring it, and she was begging for money to throw in the water to make a wish.

She threw her money in, wished for ice cream, stared intently at her coin, then sighed.  She walked away and said, “I threw my money in and made my wish, but it didn’t turn into ice cream.  Why didn’t it work??” 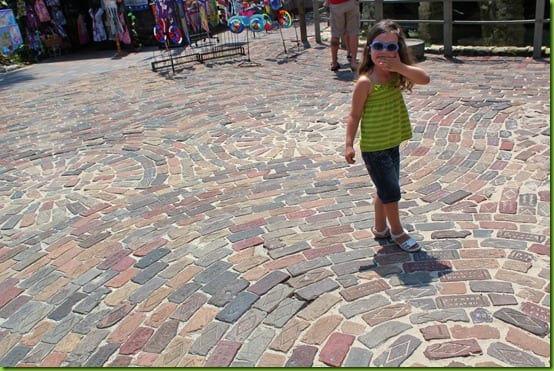 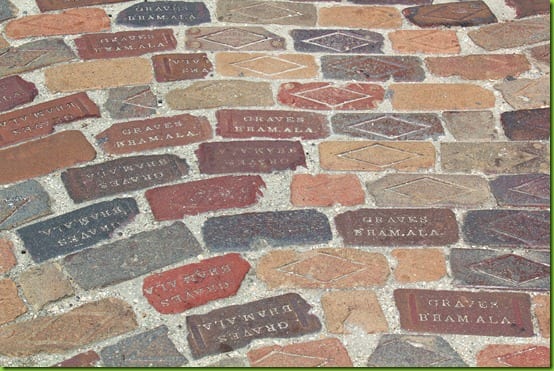 I Immediately recognized those bricks.

Here was a part of my city’s proud history, tucked hundreds of miles away in the nation’s oldest city.

I was proud, I was thrilled, and I was immediately transported back to sitting on my steps as a little girl, to riding down that brick road, and to imagining all sorts of historical Birmingham stories. 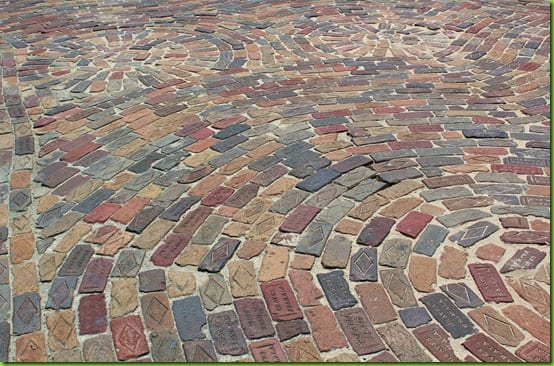 Of course, I pointed the bricks out to Ali, and just like my reaction as a little girl, she was completely unimpressed.

Hopefully though, in time, I will be able to instill in her a love for history, for our city, and for imaginary visits to times past. 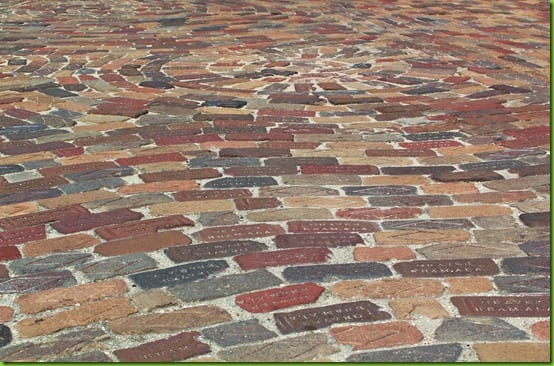