Ali had her Cubbies awards program two weeks ago.

(By the way – did you know it takes approximately fourteen days to transform a traumatic memory into a funny one? Well now you do.)

The idea was to get 25 preschoolers to stand in front of a room full of their parents and cooperatedly say the pledge, a verse, a motto, and then quietly wait for their name to be called to get their award.

Obviously, a situation just begging for one of the kids to use it as their platform to humiliate their parents.

I wanted to let Ali know that I was excited for her, and I wanted to be able to see, so I sat on the front row.

This was not a well-thought-out plan.

Because when they filed in, Ali was also on the front row, which meant that we were approximately 18 inches from each other. 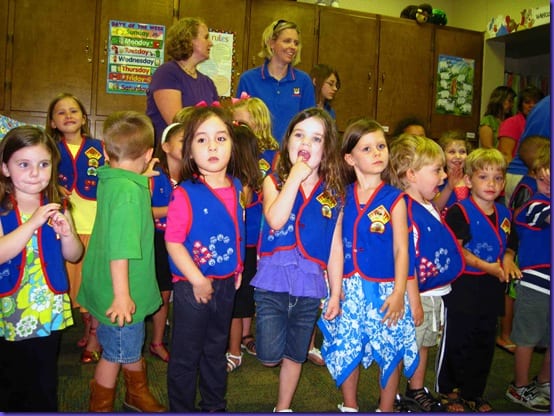 (The Flamingo with her hand in her mouth would be my child.)

Everyone else’s kids behaved. Nathaniel kept his tummy in line, AJ kept Nathaniel in line, and Michelle had so much forethought into her perfect behavior that she wore her blue jeans backwards to help her keep her hands to herself: 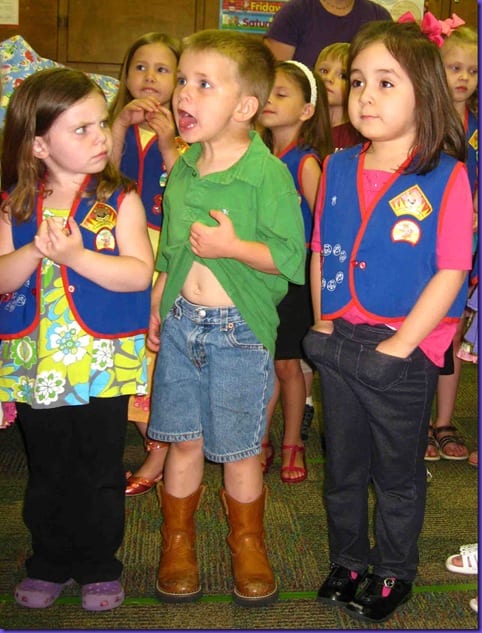 But my kid? Notsomuch.

The fact that we were nearly nose-to-nose made her feel free to talk to me.

And loudly, of course, so that I could hear her over the other Cubbies saying all of the things they were supposed to say.

It all started during the pledge of allegiance. Instead of saying a single word of the pledge, she began to loudly question me.

“Mommy, why aren’t the other kids saying the pledge?”

I shhh’ed at her nervously.

“MOMMY. WHY AREN’T THE OTHER KIDS SAYING THE PLEDGE??!!”

I whispered, “YOU’RE not saying the pledge. THEY are!”

Then she decided to amp up my embarrassment.

She singled out another kid in the class, for no apparent reason since he was behaving perfectly well…

Her voice was so loud that it resonated off the back wall. But it didn’t have to – because Hezekiah’s parents were sitting right behind me. I’m sure they noticed my neck turning red.

“Hezekiah IS saying the pledge. Quit talking and say the pledge!”

While still standing on one leg, she accepted my answer and began looking around the classroom. At which time she spotted the birthday chart.

“MOMMY!! WHY ARE THERE CUPCAKES ON THE WALL?”

I looked around the classroom to see if there was an empty chair in the back of the room…or an escape route.

The other parents could smell my fear.

Then it was time for their verse and motto.

I don’t remember what happened after that. But I think it’s safe to assume that I either found her award and threw it at her, or I actually managed to finally melt through the floor.

But the bright side? At least my kid made all of the other parents even prouder of their children that night.

23 thoughts on “When Not To Be a Supportive Parent.”