I do all of the budgeting, bill paying, checkbook balancing, and money laundering in our family.

Okay, not money laundering, but I tell Chris that I do, because he never checks behind me to see how I’m handling our finances.

He says that he trusts me implicitly.  Some combination of my accounting degree, the fact that I’m always nagging him to spend less, and being a tightwad in general, I suppose.

But this flying-solo-on-the-budget thing can sometimes get complicated.  Especially since he’s usually off running or working when I’m balancing said budget.

For instance: he and I each have our own credit cards for our personal expenses.  I think the idea was that we could buy each other nice things without the other one knowing how much we paid.

Problem is: I have to try and figure out his credit card bill each month when I pay it off.  Therefore, I know exactly how much money he spends on me.

He bought me flowers a month ago for our anniversary. 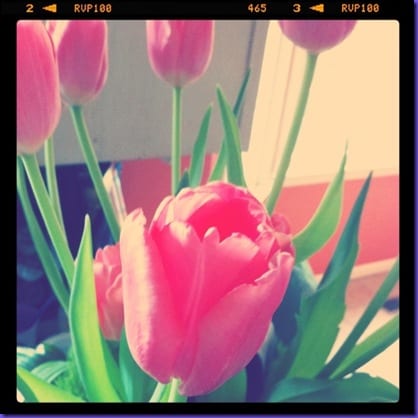 (They were perfectly lovely, and I kept them overly long like I usually do, mainly because I dreaded cleaning out the funky smell of rotted flower water.)

So I was paying his credit card bill this month, and I saw the charge for my flowers.  I usually try to avoid looking at the dollar amount (because who wants to fuss at their husband for spending too much on flowers??), but I noticed THREE charges from the florist – so I looked.

Of course he wasn’t home to ask about these suspect charges, so my mind took off pondering all of the possibilities…

a. The florist accidentally triple charged him – seems unlikely, but maybe the inherent stresses of floral arrangement are more destructive than I imagine.

b. The florist knows that I do all the bills and that I would probably just trust Chris’ floral purchases and not question the amount, so they triple charged on purpose.

But, although Chris has been buying all of my flowers from this same florist since before we were married, and at one time the receptionist knew his identity by voice alone, I think intimate knowledge of our marital financial practices is probably unlikely, at least until they read this.

d. Chris has three wives, NOT with the same anniversary, but was placating the other two wives with flowers for leaving town on an anniversary trip with me. Since I’ve never been placated in said manner, this seems to rank low on the plausibility scale.

e. My flowers were ridiculously expensive, and so Chris took the “Three Easy Payments” plan, whose fine print indicated that he’d be making all three payments at once. This may be far-fetched, because Chris has listened to enough Dave Ramsey to get sick at his stomach at the prospect of making payments on something that is already dead and in a garbage truck.

With all financial and marital fidelity at stake, I left Chris a copy of his bill with all of these options listed and asked that he please circle the correct answer.

“None of the above.  I have five wives, but two of them prefer chocolate.”

Look for us soon on a TLC show near you.

20 thoughts on “The Complications of Budgeting.”