All photos contained herein are reenactments.  The original event was far too graphic and intense to photograph.

It had been three days.

He used to not be able to go three hours without pooing.

I knew that when it finally happened, I was going to be in for it, so I went ahead and started putting him in the next size up of diapers in order to help contain it.

(Please notate that as Mistake #1.  Next Size Up = Too Loose To Contain.)

I had just finished feeding him, and it was right before I walked out the door to go to the dentist.  My Mom was to arrive any minute to watch the kids, and I was dressed in non-puked-on clothes and  ready to go.

I sat him on the couch in the Boppy for just a minute. 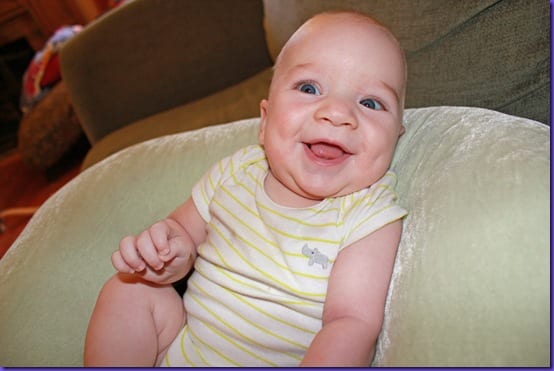 He looked at me sideways, then there was a groan, a red face, and then unpleasant noises. 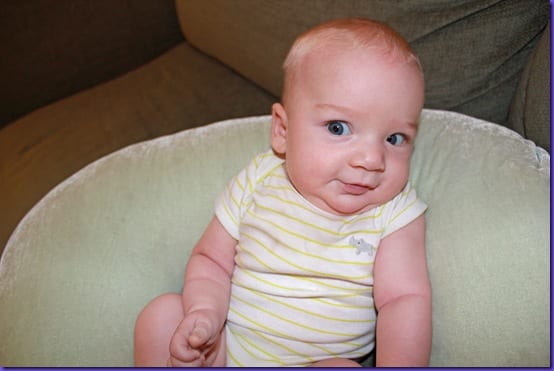 Ali, who was standing nearby, giggled and said, “He’s filling his diaper!”

I didn’t want to pick him up and disturb the contents until the process was complete, so I left him sitting there. 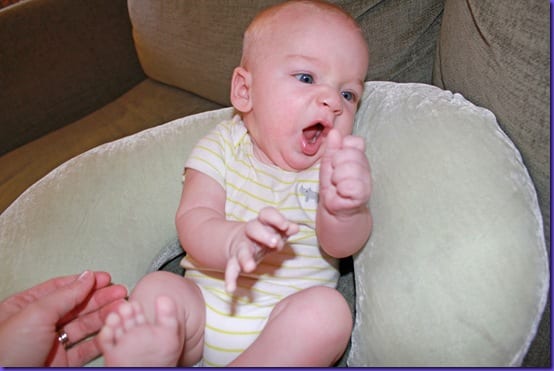 With the pressure of a fire hydrant, a waterfall of nightmares began pouring out of the side of his diaper.

Ali saw it spewing forth and sprinted to the other side of the room, yelling as she ran, “I’m going to stay over here so the poo can’t get to me!!!”

I yelped and grabbed a stack of napkins off of the coffee table.

I sopped a gallon of foulness off of couch, and quickly put the napkin stack under him.

Just in time for another eruption.

This was no waterfall…this was a Geyser.

Or a Volcanic Event.

Or Hell opening up and swallowing my living room into it’s murky, seedy, smelly depths.

It overflowed off of the napkins and back to the devastated couch.

There was nothing to do but stare, and hope that it was all a dream…or that my Mom would hurry up and arrive, and I could run out the door, pretending I didn’t see what had just taken place.

I finally unfroze and yelled for Ali to go get me the box of wet wipes.  She reluctantly left her place of refuge and brought them to me, stretching her arm out as far as she could to hand them to me so she didn’t have to get too close.

Then she ran back to high ground.

I assessed the damage.  I decided the only way to tackle this was one bite at a time.

I wiped the dripping layer off of Noah and prepared him for transport.  I carried him at arm’s length to his changing table, leaving the massive disgust of what used to be our couch behind.

I opened up his diaper, half expecting it to be empty based on the volume that defected from it, but no – it was a massive lake.  A lake so nasty that it looked like somewhere that Voldemort would choose to hide a horcrux.

I stripped him down and realized…the wet wipes were in the living room.

Yelled for Ali again, thanking God that I had a four year old assistant.

I began sopping up his brown coating.   All while he, of course, giggled maliciously. 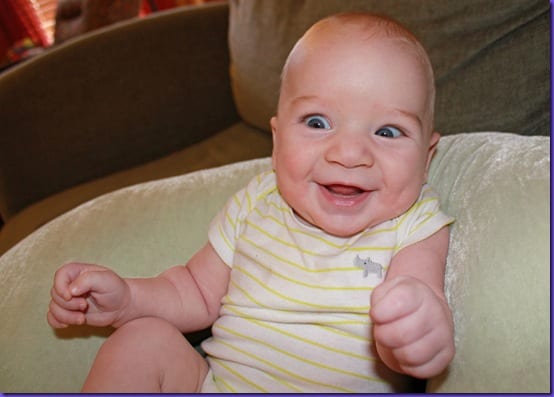 (Apparently, the combination of wet wipes, a now empty intestinal system, and sticky poo is quite ticklish.)

I left him in his crib, giggling and naked-but-a-diaper, while I went to burn address the couch. 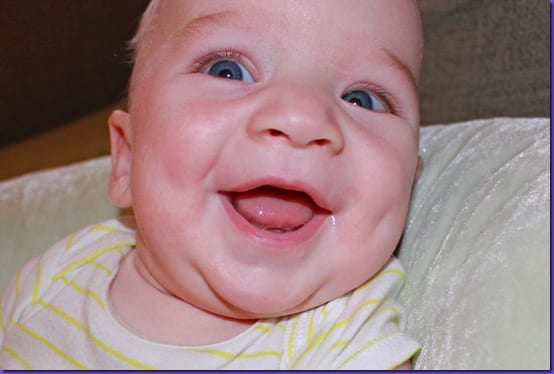 And at that point, my Mom walked in.

And, thankfully, she didn’t walk back out when she saw the massively toxic state of my house and my children.

I finished the HazMat cleanup as best as it was in my power to do so, although I don’t think that our couch will ever feel the same about Noah.  It kinda has this whimpering-in-the-corner aura about it now…

Then I rushed out the door to make it to my dentist appointment.

About halfway there, I realized that I never checked my face, clothes, or arms for shrapnel, so I began a mid-drive inspection.

And it was a good thing I did – my dentist would have really wondered why I’d eaten mustard for breakfast.

25 thoughts on “The Poo of Reckoning.”