Really, it should have a slogan.

It was the part of having a boy that I least looked forward to.  As if new babies aren’t shocked enough by their entrance into the outside world, let’s REALLY give them something to be shocked about!

Now granted, I certainly didn’t dread it enough to become an Intactivist and make him wear embarrassing onesies such as these: 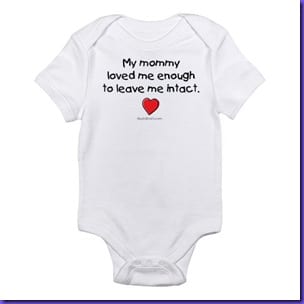 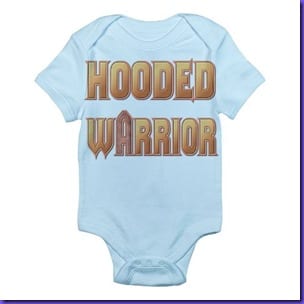 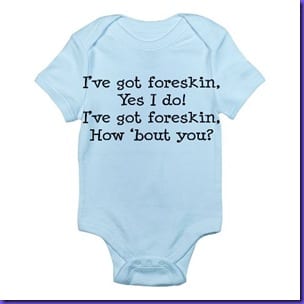 (Thanks to Marty for introducing me to this concept…I had no idea that Intactivists even existed before she enlightened me – after all, it takes a while for trends such as this one to make it all the way down here to Alabama.)

…but nonetheless, I wasn’t looking forward to it.

And, although putting Vaseline on “it” every time the diaper is changed is supposed to help “it”, I am positive that Noah very clearly informed us that no, it was not a pleasant feeling AT ALL to be smeared with thick goo.

But, luckily for me, since it’s fairly impossible to change diapers easily after having a C-Section, I got a 5 day reprieve from having to deal with his injuries.

And really, luckily for Noah, too.

Because when I DID take up my diaper changing duties, I didn’t make it any easier on the poor kid.

You see, Vaseline is pretty thick stuff.  And so you have to squeeze the tube with all your might to get it to squirt out.

And you see, in the dark, the Vaseline and Desitin (diaper rash cream) tubes look exactly the same.

But, Desitin comes out of the tube a WHOLE lot more willingly.  ESPECIALLY if you give it a Vaseline-strengthed squeeze.

And so, one fateful middle-of-the-night last week, poor Noah found himself topped with half a tube of Desitin where I was SUPPOSED to have put Vaseline.

And, apparently, Desitin feels even worse than the intended topper.

And, just to make things worse, the act of Mommy trying desperately to scoop up half a tube of Desitin off of aforementioned injury feels EVEN INFINITELY WORSE.

Poor kid.  Doesn’t even know what one is, but he’s totally wishing I were an Intactivist.

34 thoughts on “The Difference Between Boys and Girls.”