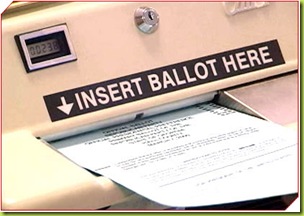 Among my attempts at avoiding mud-slinging commercials, pre-recorded phone calls, and unfortunately-not-pre-recorded-so-I-can’t-hang-up-on-them-because-I’m-too-dang-polite political surveyors, there is, thank goodness, some entertainment that comes out of elections – at least if you live in Alabama.

They’re awesome – especially the nicknames that people choose to associate with themselves.

Oddly enough, according to our voting regulations, you can put whatever nickname you want in quotation marks (and you know how I feel about things in quotation marks) in between your first and last name, but you can’t have a title at the beginning of your name, a rule that drove Dr. Robert Bentley, running for Governor, to actually legally change his first name to “Dr.” – so as to make sure to get his full educational credit.

Which, really, was a MUCH better choice than going with the acceptable but really-questionable-sounding Robert “Doctor” Bentley.

But. Besides D-R-dot (can I call him that now since it’s his legal name?), let’s talk about the quotey nicknames. They go a long way to help out every stereotype ever associated with our great state… including some of my favorites from the ballots this year…

Besides these guys, there were somehow TWO primary elections in Alabama that had two people with the same names running against each other. So, of course, one of them chose to differentiate with a cheesey quotey nickname…

Bettye Greene ran against Betty Green, and apparently Bettye didn’t seem to think that her parent’s extraneous use of e’s made her stand out enough, so she chose to be listed as “Bettye K. “Mama” Greene.

Unfortunately, Betty without all the e’s beat her out.

So people apparently vote for action, but not for their Mamas.

Without even needing nicknames, there are, of course, there are plenty of candidates that sound like they could make up a whole cast of a remake of The Beverly Hillbillies: Emma Jean, Bobby Lou Leigh, Benny Jo, Bettye Fine, Butch, and Champ.

Somehow, though, in a miraculous turn of fate, not a single Bubba.

But my awards for the top four most awesomely memorable names on the ballots this year are all, apparently, their real names.

So really, they can’t be blamed – their parents can. Or maybe their parents should be commended for their foresight – because they certainly have the advantage of name recognition.

The awards go to:

And yes, just like he says in his commercial, that IS his real name. And he IS running for Treasurer. And we SHOULD trust him with our money, even if he IS a Young Boozer.

Are your state’s ballots this entertaining, too?