I’ve been seeing all of your awesomely fall crafty posts of how you’re oh-so-fancily decorating your houses for the season, and have mourned my complete inability to pull off anything similar.

After all, I don’t usually write domesticated how-to posts, because my efforts would usually end up being how-NOT-to posts….

Such as, for instance, my horror-movie-for-kids results from my attempt at ironing Ali’s Cubbies patch onto her vest: 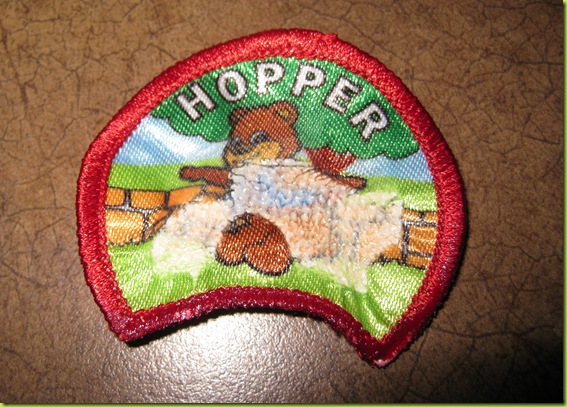 She’s not yet forgiven me for melting Cubbie Bear’s midsection off.

”Why did you DO that to Cubbie bear?!”

However, I wanted to do SOMETHING fallish and crafty with Ali (preferably that wouldn’t give her nightmares), and the most obvious choice was to use our pumpkins.

But I knew that the pumpkins we picked were not big enough for carving, NOR am I artistic enough to create a successful pumpkin face anyway, so I was unsure…until I found this fun glitter idea on my new friend Amanda’s blog.

Glitter swirls…I think I can handle that without melting anything or gruesomely disfiguring any pumpkins.

But, just in case, I bought a tiny “fake” pumpkin to practice on first: 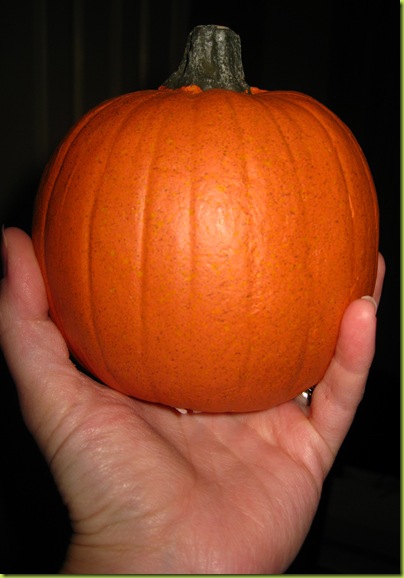 After all, the pumpkins in her post were all fake (probably a smart move so that they could use them season after season, but I was determined to use our real pumpkins in SOME sort of useful way.)

I drew swirls on the fake pumpkin… 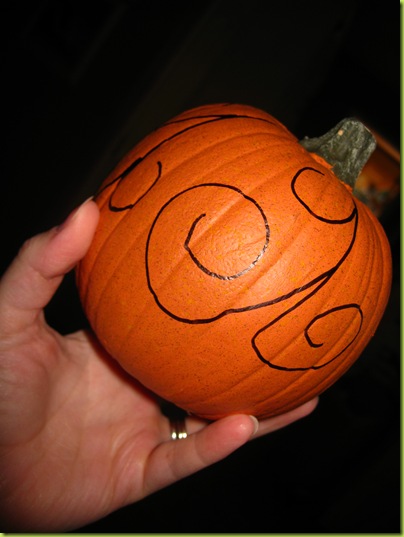 And then I recruited my helper, and moved the project outside to avoid a house-filling Glittertastrophe: 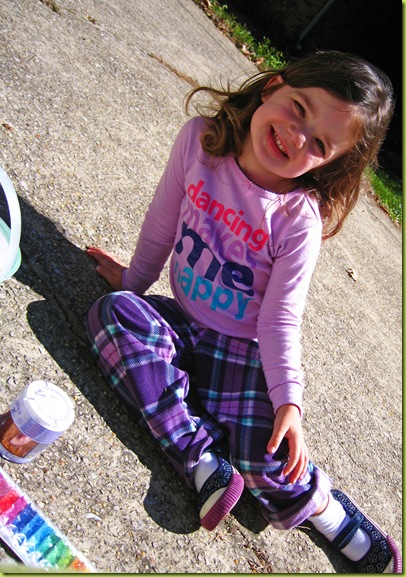 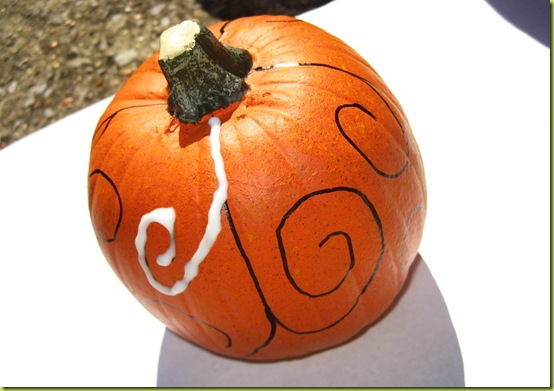 And then the glitter. 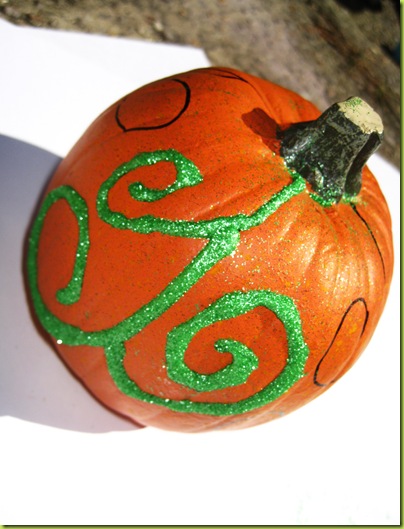 It seemed to be working fairly well on the practice pumpkin, so I pulled out the much revered white pumpkin… 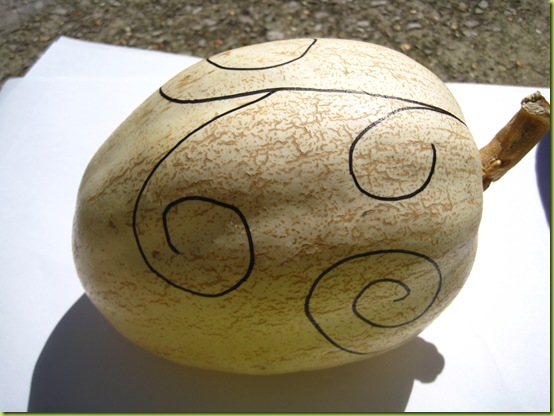 And then I put the glittering process into the hands of a three-year-old. 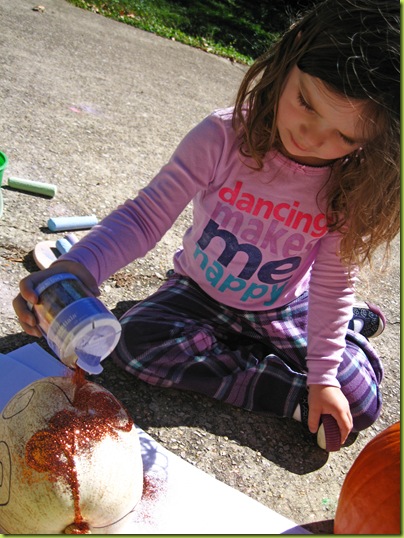 …surely I deserve a Mommy Scouts Badge for that risk.

(But then again, I’d probably just melt it trying to put it on my Mommy Vest.)

But it was still going well, so we moved onto our orange pumpkin, which was much harder to draw nice, curvy lines on it due to it’s natural bumps and ridges… 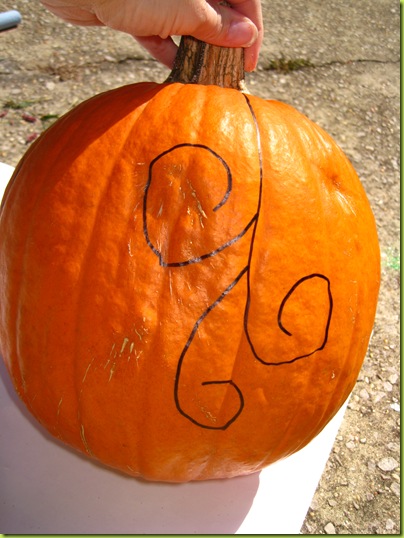 (And really, I wish I had just freehanded the glue – I think the whole process would have been a bit easier.)

After each glitter application, we shook off and then blew off the extra glitter, all while trying to reclaim as much as possible for finishing the rest of the pumpkin.

But, imagine if you can, about half of this extra glitter ending up on my face, due to my attempts to blow it off, and unfavorable wind direction: 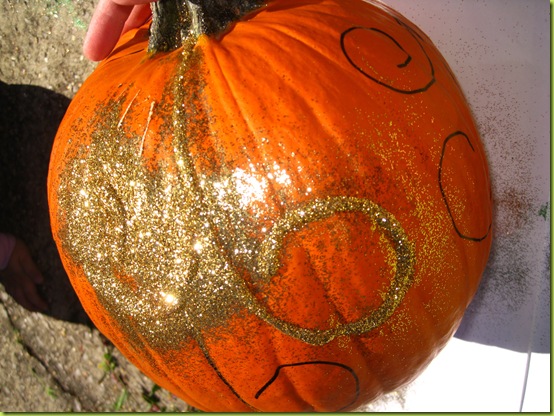 …which would explain my glittery nose-blowing for the rest of the day.

Of course, it took all of about three rounds of glittering for her to get entirely too bored with the project, but I had prepared: I had sidewalk chalk available, and some awesome flower-like weeds growing in our yard, just waiting to be picked: 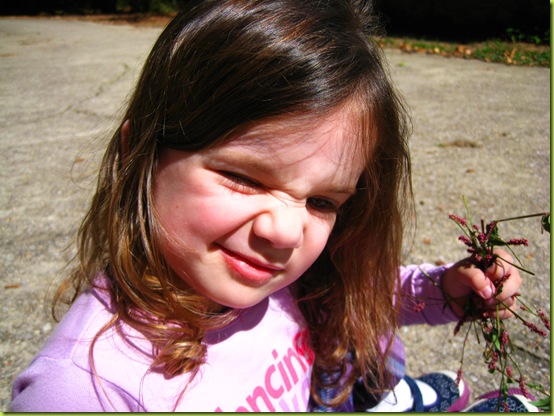 After finishing the swirls, I rubbed glue on the stems and sparklefied them as well, but the gold one came out a bit too Vegas-Showgirl for my liking… 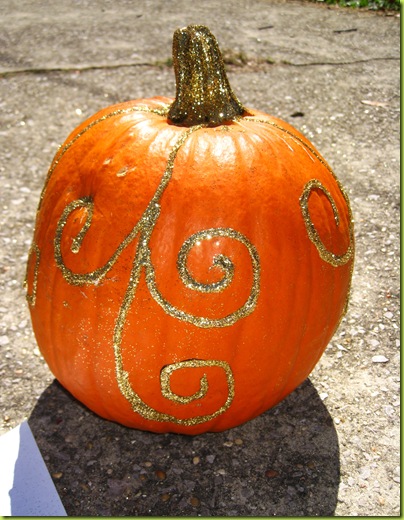 So I allowed the white one to stay happily in it’s natural state.

And so, the finished products: 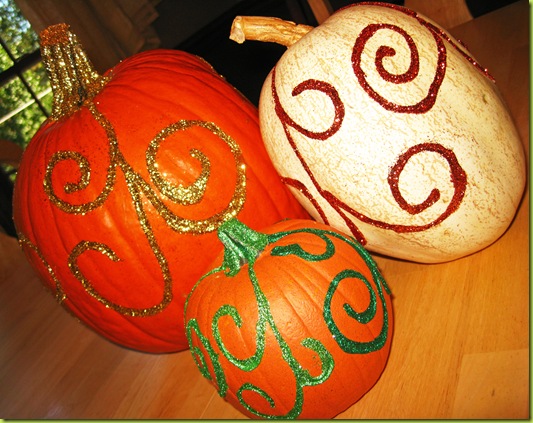 Which means that for now, at least until our pumpkins start rotting and I have to throw them out so that I don’t end up on THAT episode of Hoarders, I can feel just a BIT seasonally appropriately decoratey.

AND, at least until I have a shower, I can be THE most glittery seven-months-pregnant woman on the planet.

I think I’ll call it “Vegas Showgirl on Maternity Leave.”