So Saturday Football did not disappoint.

I mean regarding my Scavenger Hunt, of course – what, you thought I was talking about the game?? It was good too.

The “interesting” fans were out in full force. Amanda B. did quite well on the Scavenger Hunt, and Green Door Girl did a fabulous job creating an Auburn version of The Hunt (thank goodness we don’t go around wearing curly-cued elephant tails on our butts like all the Tiger Tails she photographed – it wouldn’t be nearly as attractive).

But, just to prove that the phenomenon of football-fashion-overzealousness is not limited to the state of Alabama, the ones I DID photograph on Saturday were the Florida fans. 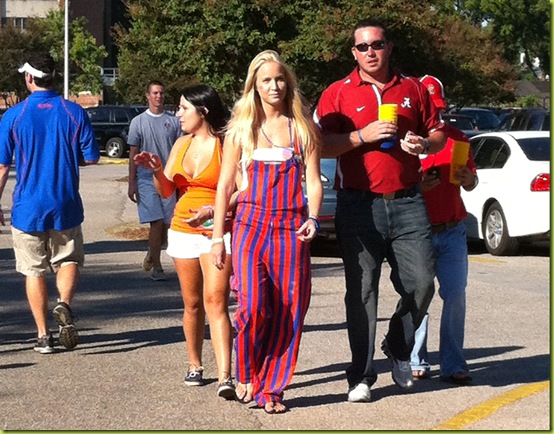 And Look! I Can Still Fit Into My Homecoming Dress from 1985. 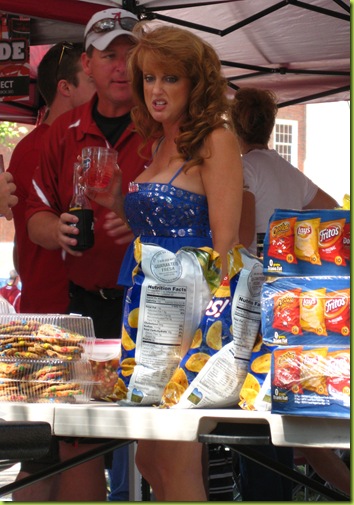 Speaking of her, boobs seemed to be the theme of the day.

After all, it is Breast Cancer Awareness Month.

But unfortunately, “Cancer” apparently got left out of the dress-code memo for Saturday, and everyone just went with the theme of “Breast Awareness Month”.

I mean, you could even buy the T-Shirt saying so, as this girl was selling: 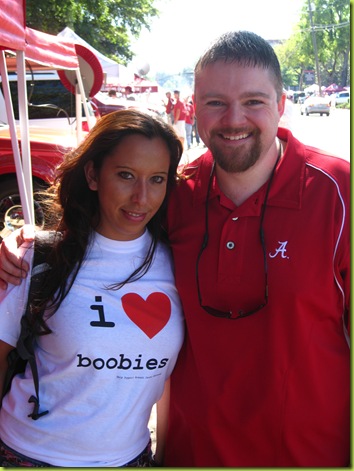 Doesn’t that shirt make YOU aware of cancer?

She made Chris buy a bracelet in order to let us photograph her and her, um, wares… 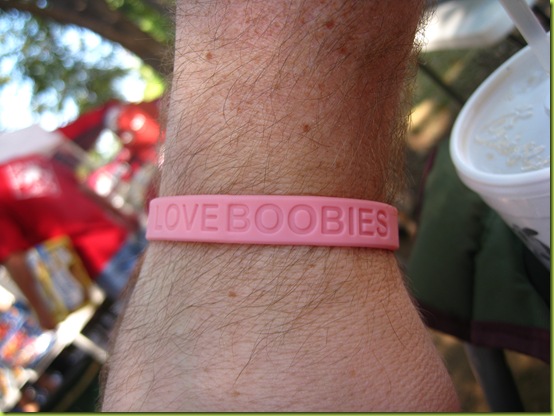 (Obviously, as soon as we got home, I got out a Sharpie and edited his bracelet to read “My Wife’s and Only My Wife’s as per Proverbs 5:18-19”.)

But while I was gallavanting around in Boobieville on Saturday, pretty much all of my friends were either working at or shopping at The Infamous Kid’s Market.

Kid’s Market is a semi-annual gigantasauraus consignment sale that brings out an unparalleled frenzied state in the Moms of Birmingham.

It is held in an huge, empty retail building, and is filled with enough kid’s clothing, toys, beds, socks, and even panties (ew) to clothe and entertain the entire continent of Eurasia for at least a decade.

It lasts for a total of three weeks, but there is a three-tiered caste system as to when you earn your way in.

The most esteemed and respected members of Kid’s Market society are the Workers – the Moms who love their family and their budget so much that they are willing to work up to 20 hours for free – all in exchange for the privilege of shopping first. They TOTALLY get a Mommy Scout badge for their dedication.

The slightly lower members of KM Society are the Contributors – the people who consign. They get to shop after the workers, but they have to still earn their way – the earlier you arrive to contribute (aka camp out all night or get there at 3AM on contribution day), the earlier your prized shopping day.

And then there are the rest of us – the Scumbag Moms. We do nothing to deserve any sort of special treatment, and so we have to wait until the “Public” days to shop.

And so, I showed up on Monday, with my shameful head hanging low, on the opening day of Scumbag Moms Shopping.

I’ve never attempted to shop on opening day before. I was scared – very scared.

And, on top of that, I was ghastly unprepared. I had my three-year-old in tow (a dangerous environment indeed for any child), and brought no devices in which to carry my finds.

(The inventions that Moms have to carry their loads are nearly par with Football-Tailgating paraphernalia – they have Laundry Baskets tugged with belts, Laundry baskets retrofitted with wheels, and I’m sure someone somewhere has a motorized laundry basket that adds up their total spent all while matching up outfits for them.)

We arrived at 11:30, shopped for clothes for Ali and only Ali (sorry, Noah – kids aren’t worth the pain of Kid’s Market shopping until they’re breathing with their OWN lungs), got in line at 12:30, carried 26 items through line for 45 minutes all while very close in proximity to the token-Kid’s-Market-screamer-baby who screeched torturously THE ENTIRE 45 MINUTES (I think they hire him to punish us Scumbag Moms), and left at 1:15.

Was it worth it?

I think it will be once my arms quit hurting. Especially since Children’s Place was such a disappointment this year.

Ali will now have clothes to wear this fall: 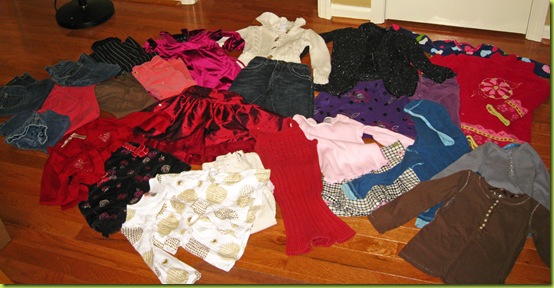 And, as always, I got to spot some of the more awesome pieces of three-year-old consignment fashion…

Because what small child doesn’t need a pair of real suede pants?? 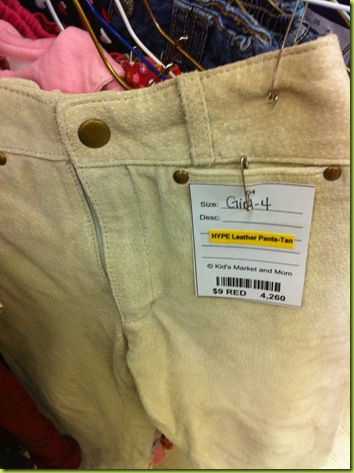 Or better yet, an entire leather outfit?? And yes, it was in the GIRL’S section. 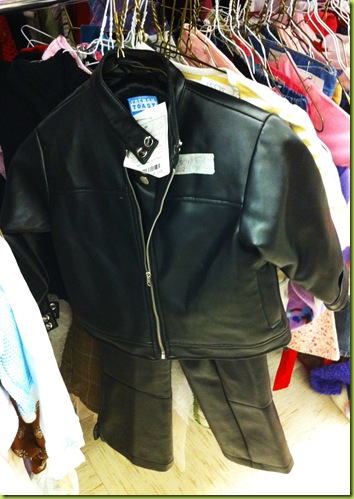 Or, for the especially stylish three-year-old, you just KNOW they have to have a pair of high-waisted jeans to fight their way out of each and every time they need to go to the bathroom: 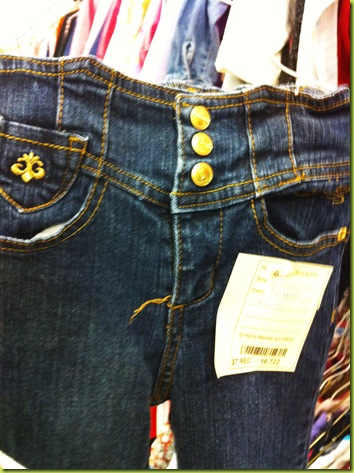 …I have a feeling that in their pre-consignment life, those jeans may have gotten peed in more a few times.