I’m having trouble concentrating on writing this post. I’m sitting on the bed during Ali’s nap, but totally distracted by the view out the window.

No, not the ocean view. The other window.

The five gray-haired guys (and one woman) sitting, drinking beer, in the KIDDIE POOL. 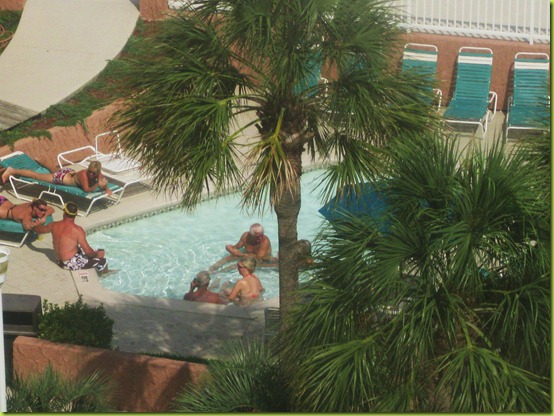 It seems to me to be an inherent assumption that beer would not be allowed in the kiddie pool, but more importantly,

WHAT is in that beer that would make six grown adults want to sit in a lukewarm pool of toddler pee???

Concerning, I tell you. And distracting.

But anyway. I’ll try to peel my eyes away from their middle-aged pores soaking up baby urine for a few minutes…but it’s just so hard…

Since we’ve been doing plenty of this… 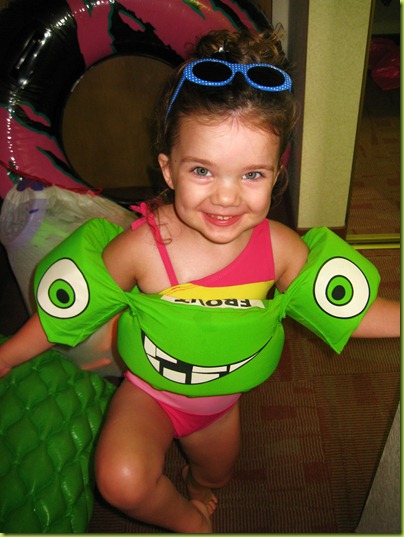 and we really wanted to take advantage of this being the last family vacation with ONE kid and NO baby, we told Ali we were going to go do NEW fun stuff. That didn’t involve water. 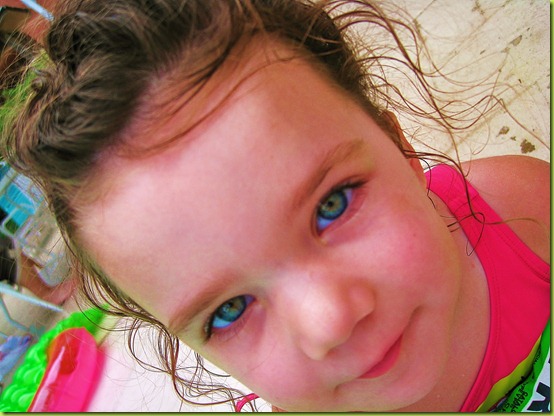 We took her to The Track, which is like a Chuck E Cheese on Steroids.

I know this is a horrible admission to make, but we have NEVER taken her to Chuck E Cheese, so she has no concept of such “fun things”.

Although I loved the place when I was a kid, I have this horrible mental image (perhaps influenced by some of your complaints) of dark lighting, coke-syrup-covered floors, a vermin-covered mouse in the same costume he used when I was a kid with no washes from then till now, nasty greasy pizza, and completely and absolutely petri-dish-of-germs arcade games.

I am far from a germaphobe, but there’s just something about C.E.C. that conjures up the very image of a Meningitis bacterium infected by Hepatitis AND the Stomach Flu.

But it’s about time that she experience the joys of our childhood (stomach flu and all), and The Track has a bunch of bonus carnival and go-karty-type rides too, and, most importantly NO giant vermin-covered-mice, so I agreed.

Our first “fun stuff” was go-karts. 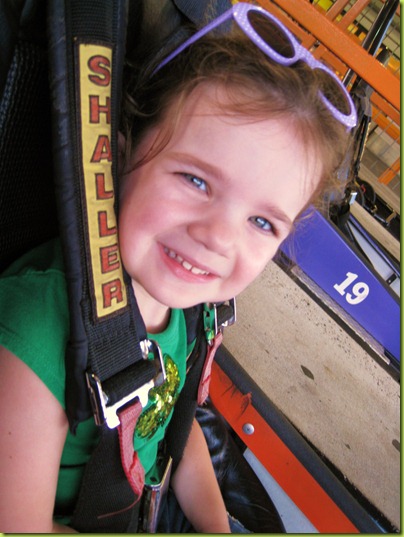 Ali was thrilled with the no-car-seat situation of “little cars” – perhaps the most exciting part.

She got to ride one circuit with Daddy, 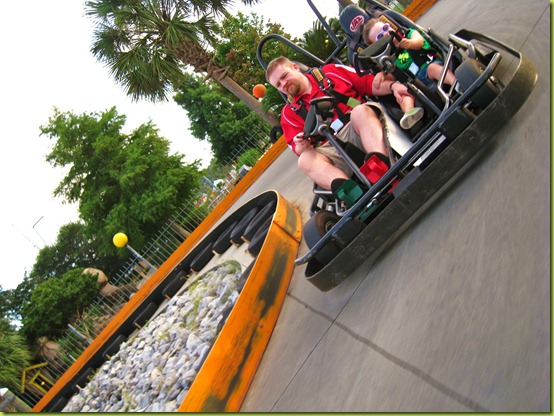 and another with Mommy.

Obviously, I had to ask the Most Important Question….and the answer was that MOMMY was the better driver.

They had a little kid carnival area, full of swings, airplanes, and spinning discs that all looked wholly too unsafe to her overly-cautious self.

She she went with what she knew. 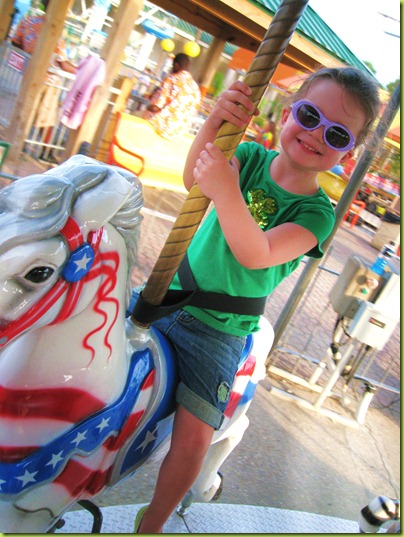 As if she hasn’t ridden on a million merry-go-rounds.

But germ-wise, it was probably the safest choice, because it was the LAMEST RIDE IN THE PARK.

Next, we headed inside to experience the Chuck E Cheese part of the trip: the amazing, intoxicating, addictive thrill of winning tickets. 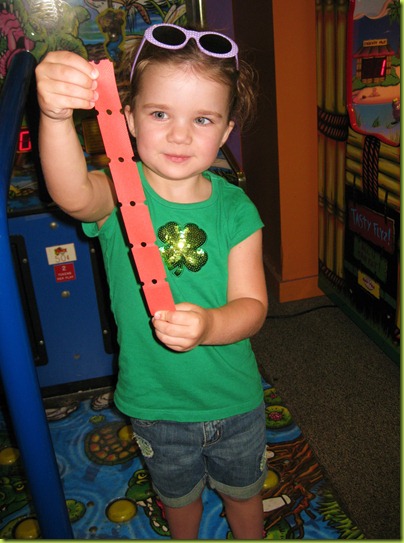 And, for the record, 20 years can go by (or 26 in Chris’ case), and the feeling of richness and accomplishment when those tickets start spitting out of machines doesn’t change one bit.

Ali got Lessons in Proper Skeeballing from Daddy… 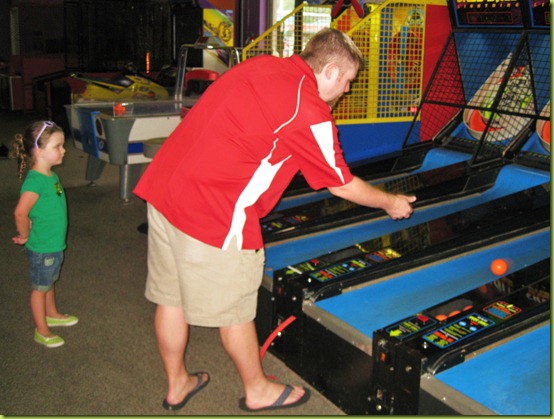 And then tried it herself. 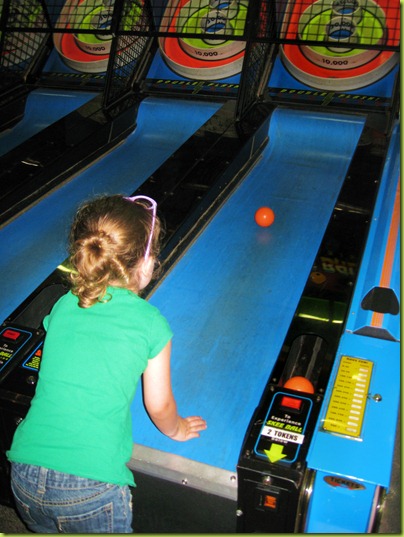 But unfortunately, the only balls that made it all the way up the ramp were the ones that jumped lanes and, therefore, were lost forever.

She was much more talented at stomping spiders, Helping me win big at Deal or No Deal, 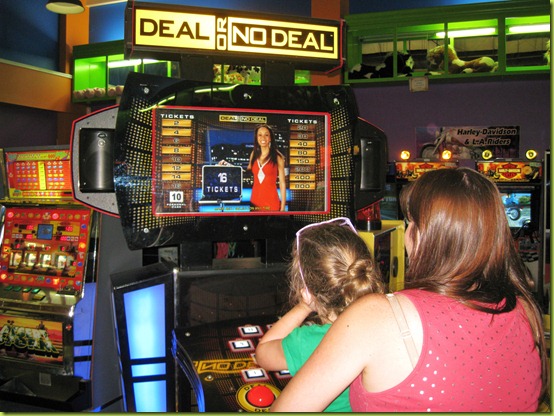 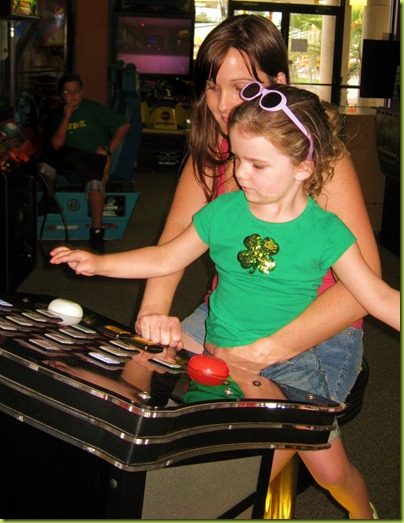 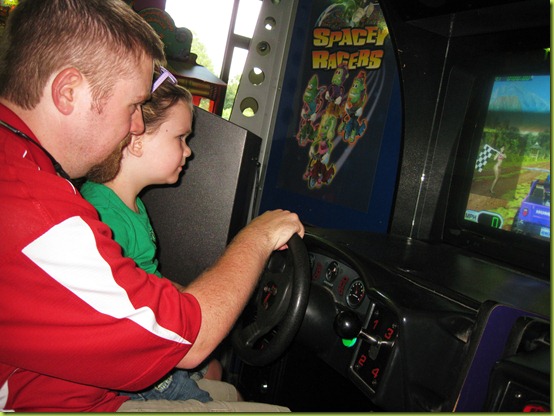 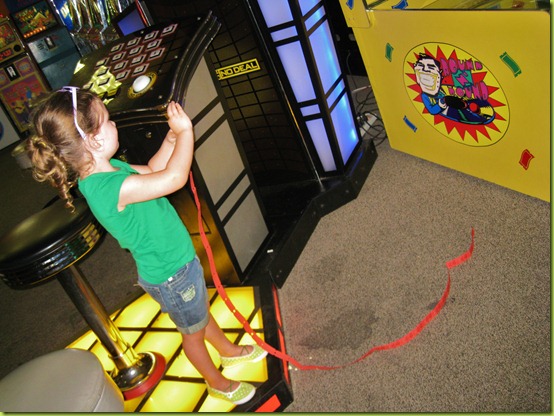 And since none of us have come down with Staph Infections, Hepatitis, or Spinal Meningitis yet, MAYBE we’ll consider actually going to Chuck E Cheese at home sometime. Unless you stop me and remind me of that Hepatitical, Stomach Flued Meningitis Bacterium, that is.

But even so, it’s a LOT less germ-filled than the kiddie pool those gray-hairs are sitting in.