Here in Alabama, certain seasons change a lot quicker than the rest of the country.

For instance, our summers usually begin somewhere around late February….and football season begins somewhere in May.

Okay, maybe not for everyone, but Chris most definitely starts his preparations and excitement at the beginning of the summer…as if he can already smell the field paint and hear the Million Dollar Band.

Last year, his preparations began in May, when he began feverishly planning his new “state of the art” satellite system, which he finished in August.

This year, since he already has his satellite system, he’s not had nearly the outlet for his football energy, but, rest assured, it’s always on his mind.

(That is, when he’s not full-on nesting for his upcoming boy child…which is also getting quite out of hand. But I digress.)

Anyway, all of the football talk has had me reminiscing back to my Junior High days…

The Junior High group at our Church always had a big Alabama / Auburn party, and would have prizes for the best dressed attendee representing each team.

The idea of prizes sounded good to my seventh grade self (forgetting for a second that prizes bought to please a crowd of 75 junior highers rarely pleased any one particular junior higher), and so I asked Mom to help make me a costume.

At that point in my life, I’d probably never watched a single football game, but team spirit doesn’t always have to be about spirit, right?

So Mom, always up for a crafty challenge, had the perfect idea: make me into a giant, junior-higher-sized pom-pom.

That sounded like it would get me a prize, so I agreed.

We bought crepe paper rolls of red and white, gathered up a couple of now-obsolete brown paper grocery sacks, and set to work.

We spent countless hours gluing alternating red and white strips onto the two grocery sacks in heaps of shaking goodness, then fashioned one of the creations into a shirt, and the other into a headpiece that would put Cousin Itt himself to shame. We paired it with some red and white striped pants, and the stunningly dizzying outfit was complete.

The end result looked like the love child of Elmo and Barkley:

(Although I searched tirelessly, there are no pictures to document the actual outfit, most likely because there are very few pictures of me in the seventh grade, due to a raging awkward stage that my parents were merciful enough to only minimally record.)

We finished it mere minutes before it was time to leave for the party, and as I was trying it on, I remembered a very important fact about myself:

I despised – no HATED with every fiber of my twelve year old body – any and all attention on myself – especially in a large group of peers in which I was decisively NOT one of the cool kids.

I told Mom I couldn’t do it – I just wouldn’t dress up.

No WAY was she going to let me not go through with this – not after our long, hard hours of work, gluing each individual shaker petal on.

I promised to wash the toilet every day for the rest of my life.

No luck. With a cruelty that only a Junior Higher has the emotional capacity to feel, she made me wear it.

I walked into that room, shoulders drooping under my layers of streamers, and, as I feared, every head in the room turned.

There were no other gigantic pom-poms in attendance that night, and I most certainly stood out from the crowd of Cheerleaders and Football Players much like Cady Heron’s Zombie Bride moment in Mean Girls: 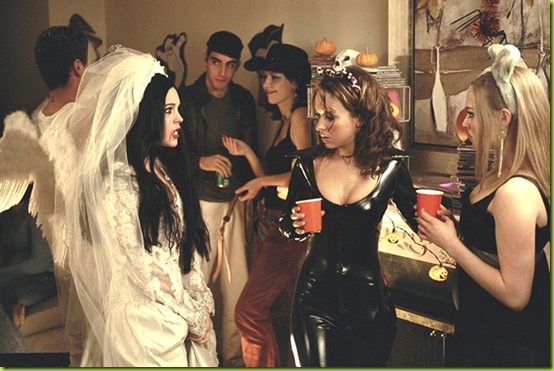 I hid in the bathroom as long as I could, and snuck in as the program started, taking the last seat on the back row.

As our Junior High director began the buildup to the winners of the costume contest, I began my prayers. Surely they’d be more effective since I was at church, right?

“Dear God, please let there be a huge injustice in the judging. Please let him play favorites. Anything. Please, please, PLEASE just don’t let me win. Don’t make me walk to the front of that room and have to stand in front of this entire group. Please. Make me invisible!!”

Of course, my prayers were for naught. I won that grand prize of useless football-themed crap and was clearly identified as the freak behind the pom-pom for anyone who was still unsure as to my identity, and bore the shame of the dreaded spotlight of attention being on my very, very awkward self.

And that, my friends, might very well explain my extremely complicated relationship with the sport of football.